Here is my first yarn purchase in Japan. It's for two pairs of Thujas, one for my work Secret Santa, and one for the person who's been helping us get settled in and acting as the go-between for our landlords and other important but non-English-speaking places. I was already mostly done with the first socks by the time I took this picture, but here it is: 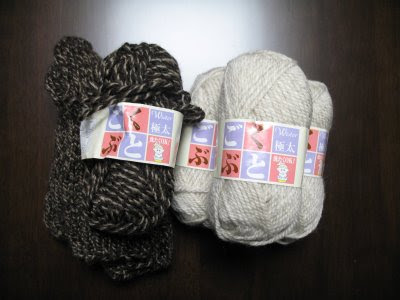 It's some Wister Gokubito. I don't know either. But that's what it says! It's a nice multi yarn, three ply with each ply a different shade. It's worsted weight, 75 meters to 150 grams, and I think it's machine washable with cold water. Not 100% sure there. I did try to felt a piece and while it kind of did, I was still able to easily pull the strand back apart after vigorously trying to felt it. The Wool of the Andes (Knit Picks) felted easily with less agitation. At this point, I've finished both pairs of socks, but have only uploaded the photographs of the first pair: 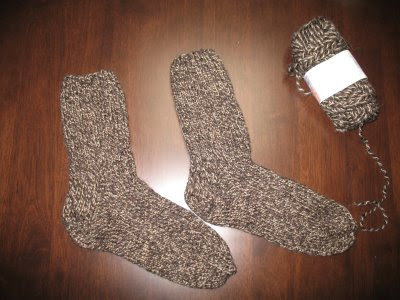 Yup, another pair of Thujas. It's my go-to pattern. Fast, easy, and who doesn't like a nice warm pair of socks in the winter? Especially when they're handmade!

Pattern: Thuja from Knitty
Yarn: Japanese yarn, Wister Gokubito
Timeframe: Bought the yarn on a Friday, cast on Saturday, finished and gifted it the following Wednesday.
Mods: None, 9.5" foot
Problems: None. Love this pattern!
Posted by AnaMarie at 1:50 AM No comments:

I will have made nearly 300 cookies by Christmas. This has taught me three things:

2. I strongly desire a stand mixer.

3. Our apartment tends to be very humid.

I can only put 9 cookies in our oven at one time. Nine. The good news is that both kinds I tried came out well, and I hadn't ever made either of them before. They came out so well, in fact, that multiple people have asked for the recipe and I even made another batch of the gingersnaps to bring to Christmas gatherings. Even Lee liked the gingersnaps! I also made an anise sugar cookie. This one uses whole aniseed (or at least the recipe didn't say ground, and it did say ground cinnamon, so I used whole seeds) and is then rolled in a cinnamon sugar mixture when still hot. These were also very good. 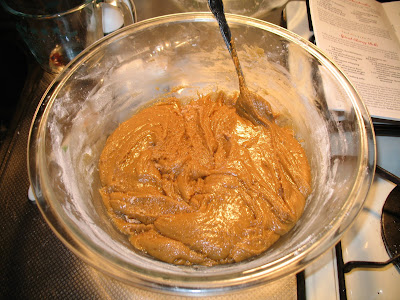 The day I tried making the gingersnaps was not a good day for baking. First, we 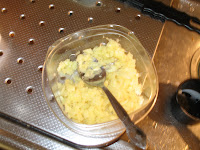 couldn't find any ground ginger. There's lots of fresh ginger, but we couldn't find any ground. So, I decided that tossing the fresh ginger into the blender was a good idea. It's not. The ginger is too big to be adequately minced in the blender. Some of it was small, and there was a good amount of juice which will be good for the flavor, but there are definitely some cookies with extra large crunchy ginger bits. We bought a ginger/daikon grater for the next batch - got it down to a perfect size. When making the cookies, you are supposed to roll them into 3/4" balls and then roll them in some granulated sugar before placing on the cookie sheet and into the oven. I had to add nearly an extra cup of flour to get the dough into a non-flowing state, and then decided to go with 1.5" balls instead of the recommended 3/4" ones. Apparently, these cookies spread out when they bake: 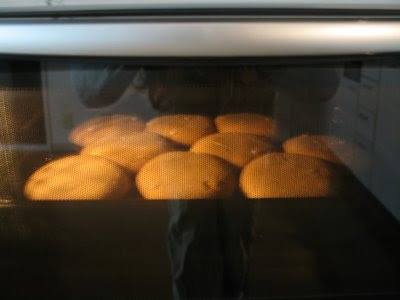 They look more like muffins in the oven than the tiny 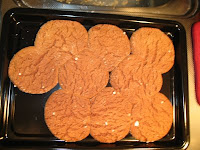 little cookies I was expecting. They came out as one giant cookie with some perforations. It tasted pretty good, considering, so I froze the dough to make more cookies in about a week. I was trying to be proactive with the baking, and knew the day I wanted to bring cookies in, so I wanted to make the dough and a test batch early enough to make sure they would actually work. These ones were much better in smaller sizes and a bit less time in the oven.

Next I tried to make some frosting. I wanted to make a Red Velvet cake for Christmas, and wanted to try a couple of different frostings with it. This one was roux based, so I cooked the flour and milk and tried to cream together the butter and sugar. This did not work so well. The sugar flew everywhere and the butter just did not cream, leaving lumps of butter in the frosting. This (and mixing other doughs and things) made me realize that I really do want a stand mixer, especially the dough hook, and I convinced Lee by showing him the pasta maker attachment. As of yet, I have not found the necessary distilled vinegar or buttermilk for the Red Velvet cake, and have the frosting in the fridge, waiting for something chocolate to coat. It must be chocolate. I know, because I have tested various cookies in it and the chocolate ones taste awesome. Everything else, not so much.

Finally, to end the baking extravaganza, I made my tried and true biscuits. They came out...weird. Very watery, and I decided to just go with it instead of adding flour for a better consistancy. Not bad, per se, but definitely not what I was going for! No pictures of these. They confirmed the abundance of moisture in our household. I've made these things dozens of times, there's (almost) no way the consistancy was my fault, it must be the air. I shall attempt these again, for science. And my taste buds.
Posted by AnaMarie at 1:02 AM No comments:

Wooo, I'm on vacation! Except for one pesky meeting on Monday, that is...

Goals for this 2.5 week vacation:

1. Finish Current Thujas
These are a gift for someone, so I'd like to finish them by Wednesday. The first one is already halfway done, so this should be very do-able.

2. Blog More
I have one completed pair of Thujas to show off, and I may as well show off some other in progress works. I've also been baking, so I can show some cookies too!

3. Finish 3 Baby/Lap Sized Blankets
The first one is already most of the way done, so it shouldn't be too difficult to do this. We've also found a way to get Hulu here, so I can peruse the movies on that while knitting.

4. Finish Fellowship of the Ring
I hated The Hobbit. However, the Lord of the Rings trilogy is on so many booklists that I'm finally tackling it. It's really pretty good so far!

5. Cook Daily
Lee's been cooking here since the majority of my recipes are sauce and cheese based (lasagna, stuffed shells, chicken parmesan) but you can't get plain tomato sauce or most cheeses here. I could definitely do Chicken Parm, and I probably will this week, but I can't get the ricotta for the others. I also like chicken and dumplings and chicken and beef based soups and stews, but there's really not stew beef or good chicken for such things either. No chicken on the bones here. The vegetables are also very small, so I'd be peeling potatoes forever for a good stew or potato soup. I have a recipe that I love, but it requires cheese too, which again is nigh impossible to get, unless you want to spend an arm and a leg. Since I'm on break for the first week and we're both on break for the second week and a half, I'm going to be doing the cooking.

To that end, are there any good Japanese style recipes you enjoy? We eat a lot of cabbage, bean sprouts, carrots and onions, and there is an abundance of fish. We can get really good pork, chicken, and beef, but it's expensive so we try to have vegetable based foods with some meat, instead of American style meat based foods with some veggies. We can only get short grain white rice, and can't get plain old distilled white vinegar. There is pasta and lettuce. There are also eggplants and a multitude of mushrooms, purple sweet potatoes and diakon, but I tend to stay away from those. The purple sweet potatoes are delicious and make really good mashed potatoes, but I don't like/don't know what to do with the rest. Any ideas?
Posted by AnaMarie at 11:30 PM No comments:

I was going back and forth between finishing more things and going on to bigger and better newer and sparklier projects, and the newer and sparklier won. I figured I'd have to swatch a couple of times before getting my desired row count, then re-do the math for the stitch count and totally restart my mom's cardigan if I wanted to make progress on that, and while I'd like to get it to her for Christmas, I think her March birthday is a bit more likely right about now. While I could keep on chugging on those projects closest to completion, most of them take a lot more effort than I can put in right now. I have been having some wicked bad insomnia, and therefore cannot really focus too well on stuff.

I have three projects that require additional charting and/or math (one not yet started) so they are not really candidates. I have a pair of socks (Hourglass socks) that have some cabling every other row, and while it's not bad, is one of the slowest pairs of socks I've ever knit so far. I think they'll be awesome and perfect work socks when finished, but who knows when that will be?! Again, that one requires more focus than I can easily give. All the cross stitches require counting, and while the two that are furthest are easy to count as many other colors are already there, it's still more focusing than I'm interested in. While I could finish the two nearly complete projects, I don't quite have all of the required materials for one (brown felt and vinegar) and I don't have the focus for correct seaming, even if it is only two set-in sleeves (Rogue). Besides, I *almost* finished what I was supposed to in order to start something new... 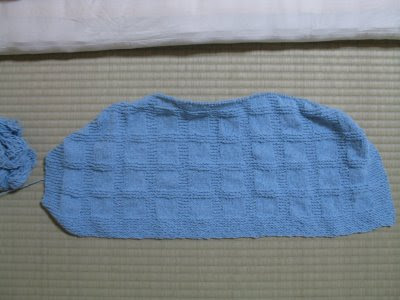 Now I'm two (started the post) 4.5 (finally took the picture) five (finally uploaded the picture) pattern repeats into a twelve repeat blanket, and I'm trying to stop myself from starting the bibs. I might anyway. The wife of one of my coworkers went into labor yesterday, and I have the yarn for six bibs...two in the plain colors won't be missed from Valerie's set, right? I mean, four bibs and a blanket...and maybe a cute little newborn bag thing...is enough, so if I make two bibs for someone else...and they should be quick little projects...and I'll be reducing my stash...

I think I officially have Start-Itis again!
Posted by AnaMarie at 12:29 AM No comments: