I found some perfect frames for my recently finished cross stitches and an older one that never got framed: 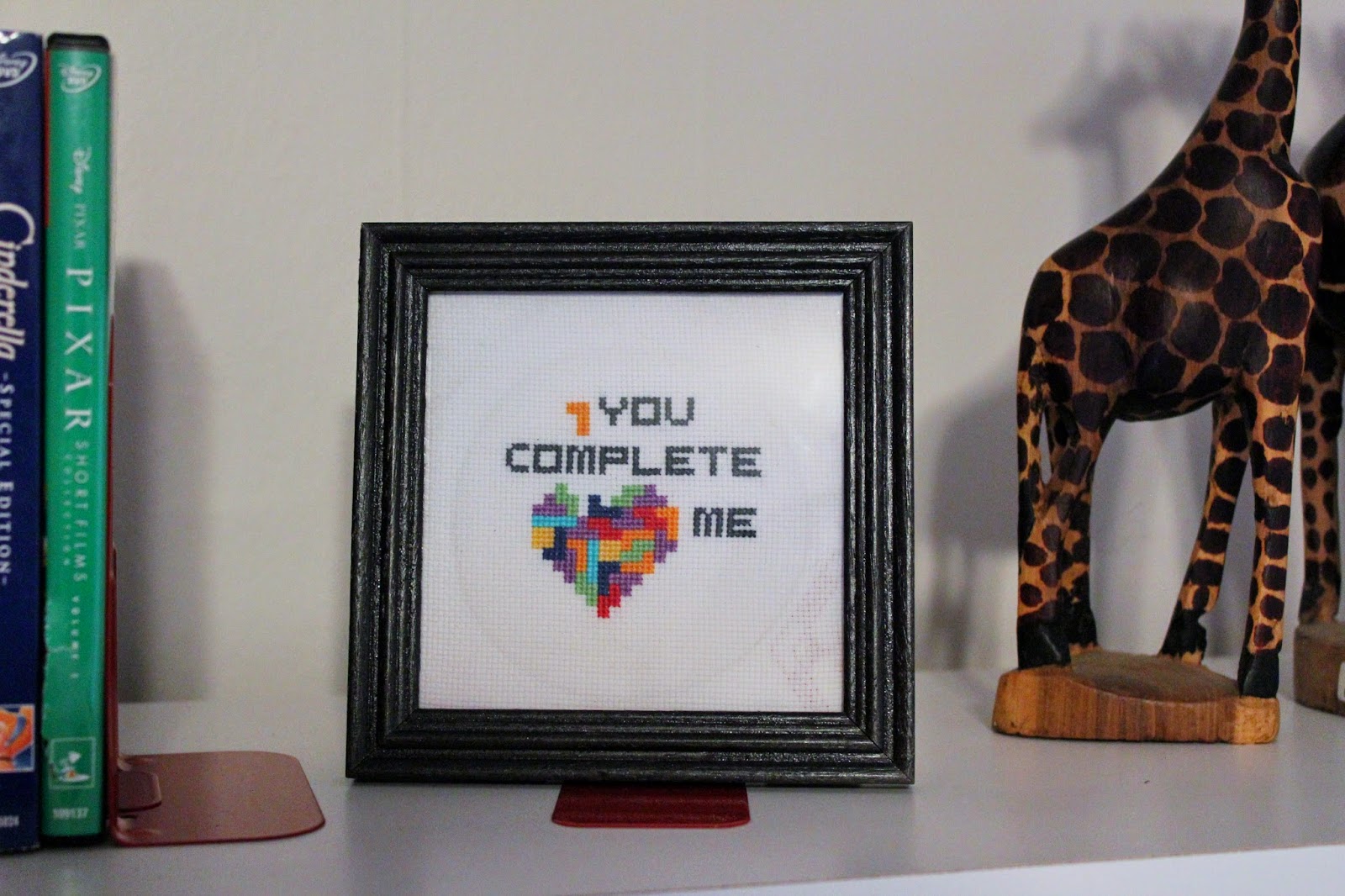 I originally made this one as a card for Valentine's Day. I made up the pattern based on a few similar ones I'd seen online. The grey frame matches the grey lettering excellently and I was very happy to have found such a perfectly sized frame for this little stitch. 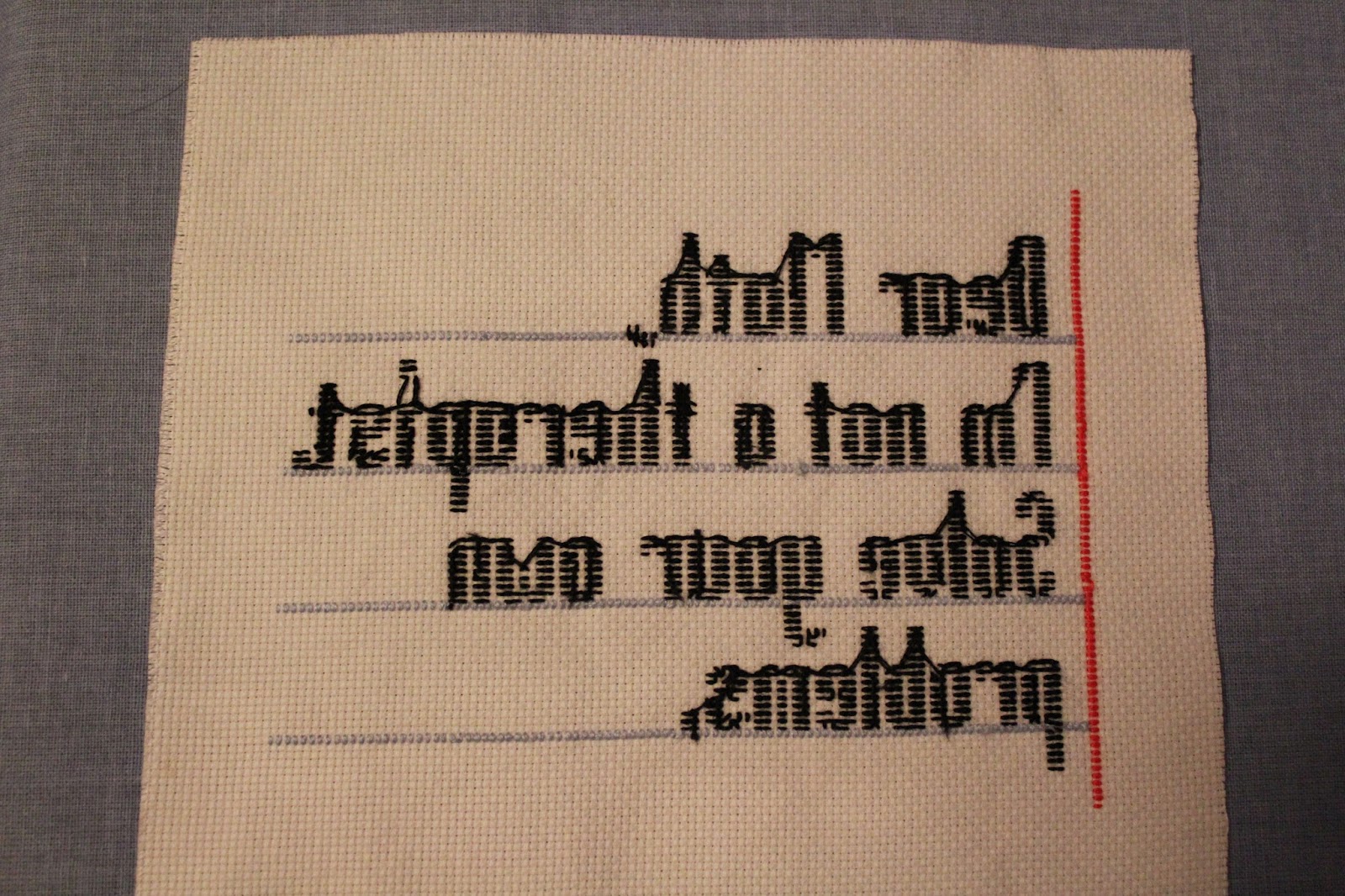 This may have been the first PDF pattern I ever purchased (from Disorderly Stitches). I tend to get kits for cross stitching but liked this one so much I bought it. 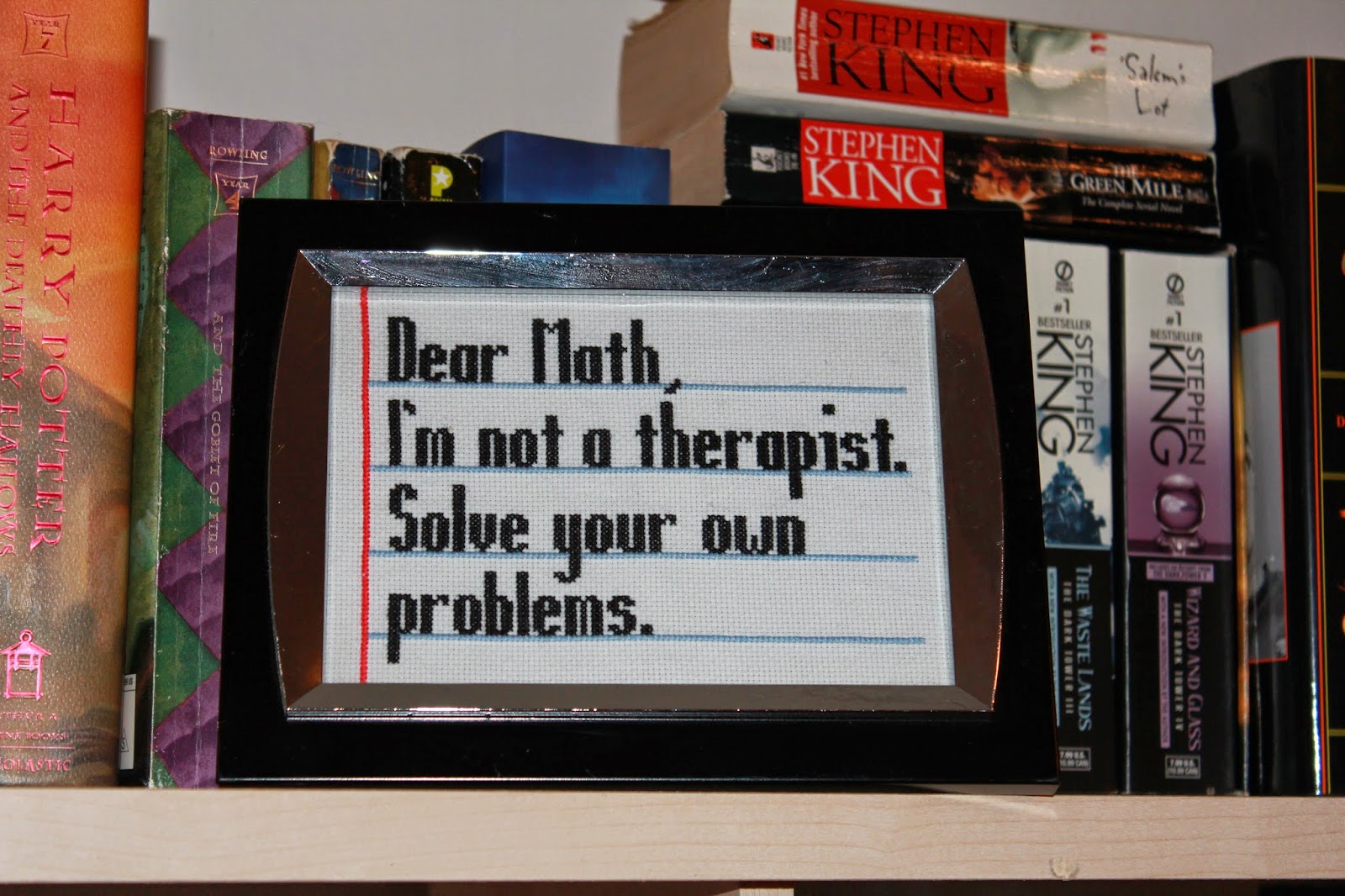 I found another perfect frame. This is the only project I kind of planned fabric-wise. I knew anything larger than 18 ct would be massive, so went with the 18-ct that I had. It just so happened to be perfect for this 5x7 frame. 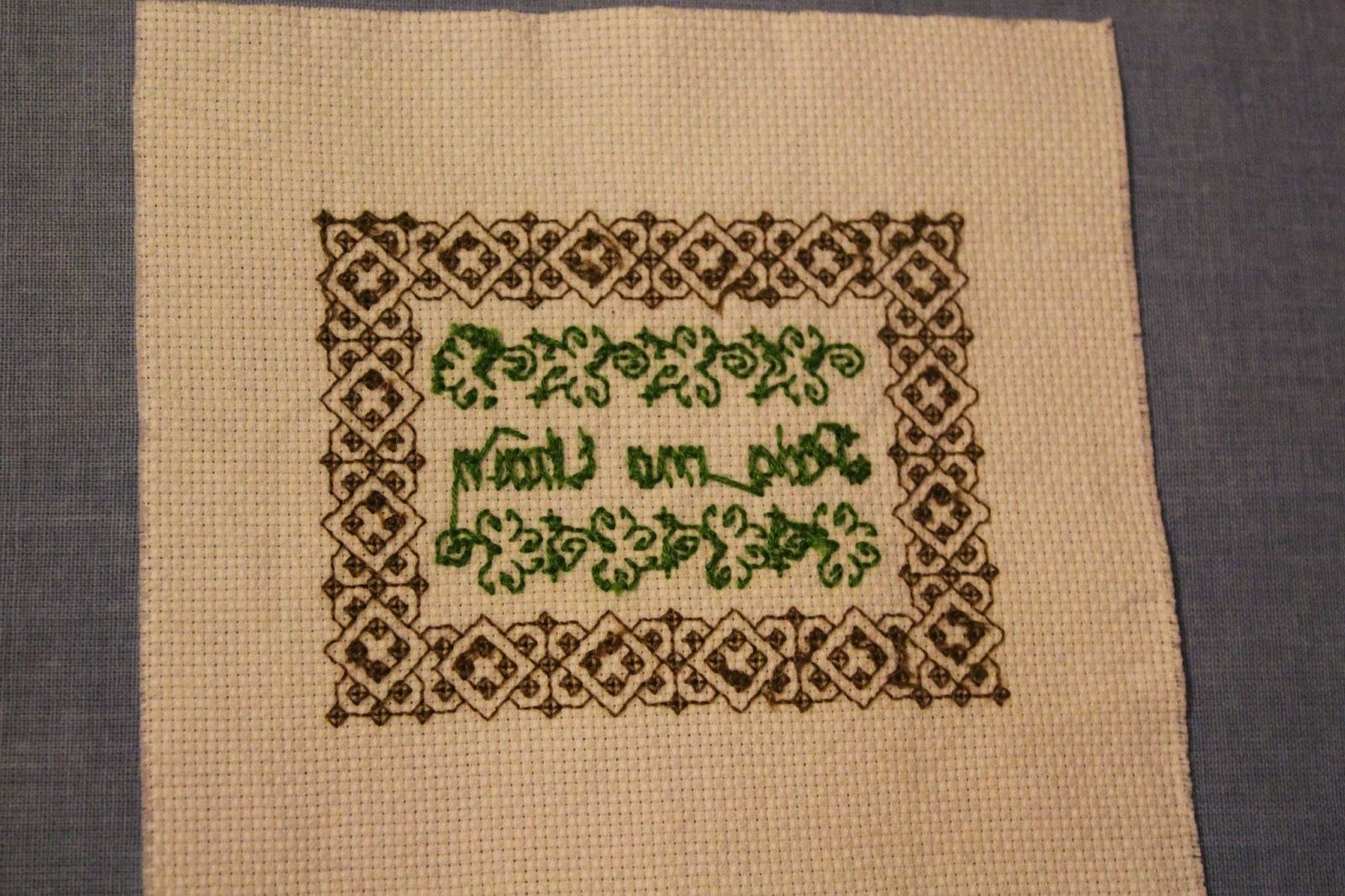 Finally, we've got a half-blackwork, half-backstitching-that-thinks-it's-blackwork piece. True blackwork is reversible, like the border. Or at least, like the border would be if I were better at hiding the ends. The border is from A Beginner's Guide to Blackwork and the center (which translates to Kiss My Bottom) is from Kincavel Krosses. 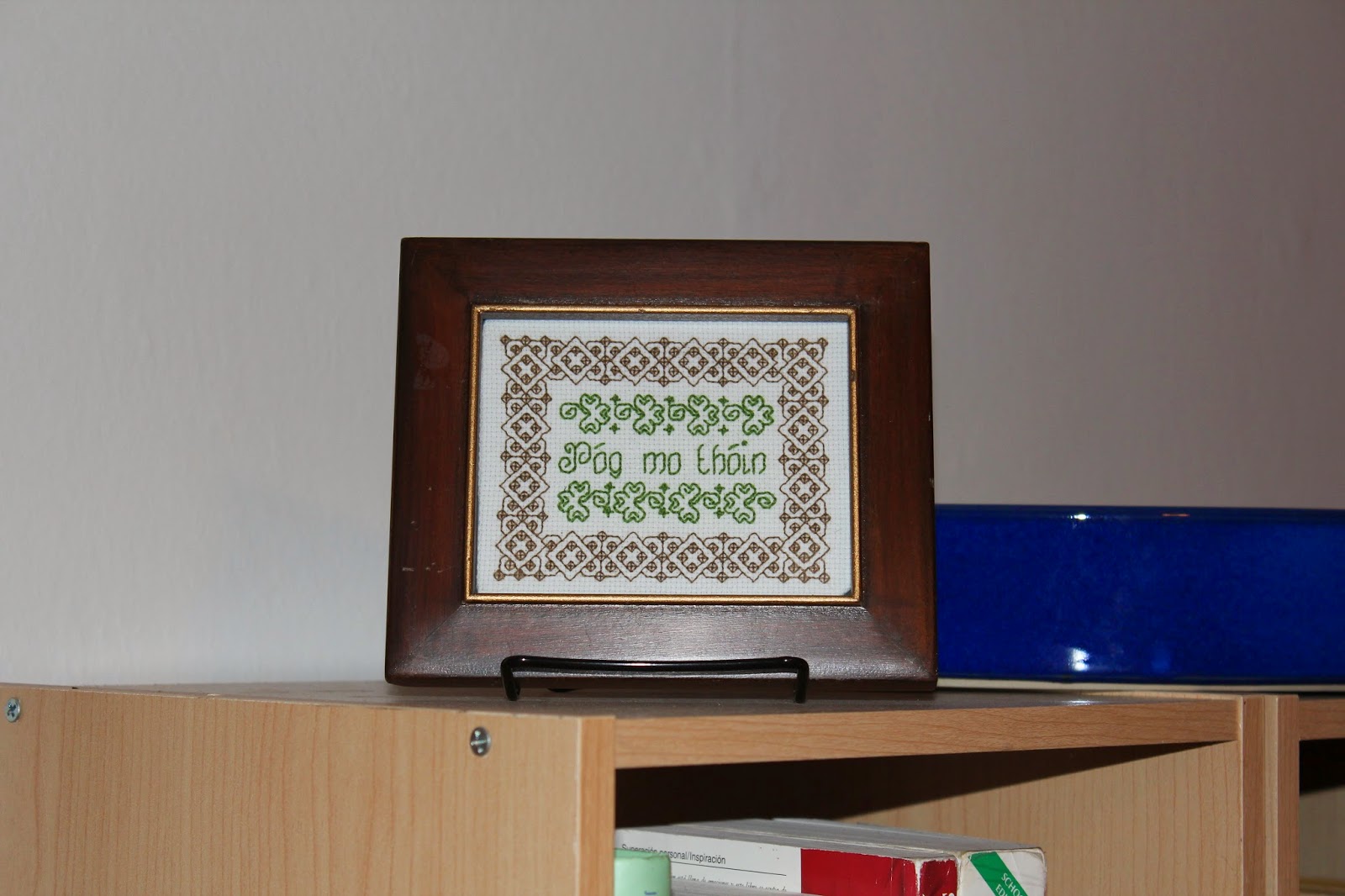 And here we have a third perfect frame. Like the Tetris one, I just grabbed the Aida and thread that I already owned (18 ct in both cases) and was very, very happy to find frames that matched the pictures in theme, color, and size. What could make them better? The fact that they were $1 each at Goodwill. Saving money, saving the planet by reusing old things, and finding practically perfect frames? Total win!
Posted by AnaMarie at 10:06 PM No comments:

So far, I've only really spun from roving and a few rolags I've hand carded. Today I was out at the farmer's market and saw signs for a Yart sale - a yard sale full of artists selling excess supplies along with their wares. One of these artists was YarnZombie of Gaslight Dyeworks, and I had enough cash on me for a bag o' batts. While my husband was not amused by the additional crafting supplies, he was greatly amused by the perfect name, Intergalactic Planetary Anarchy. 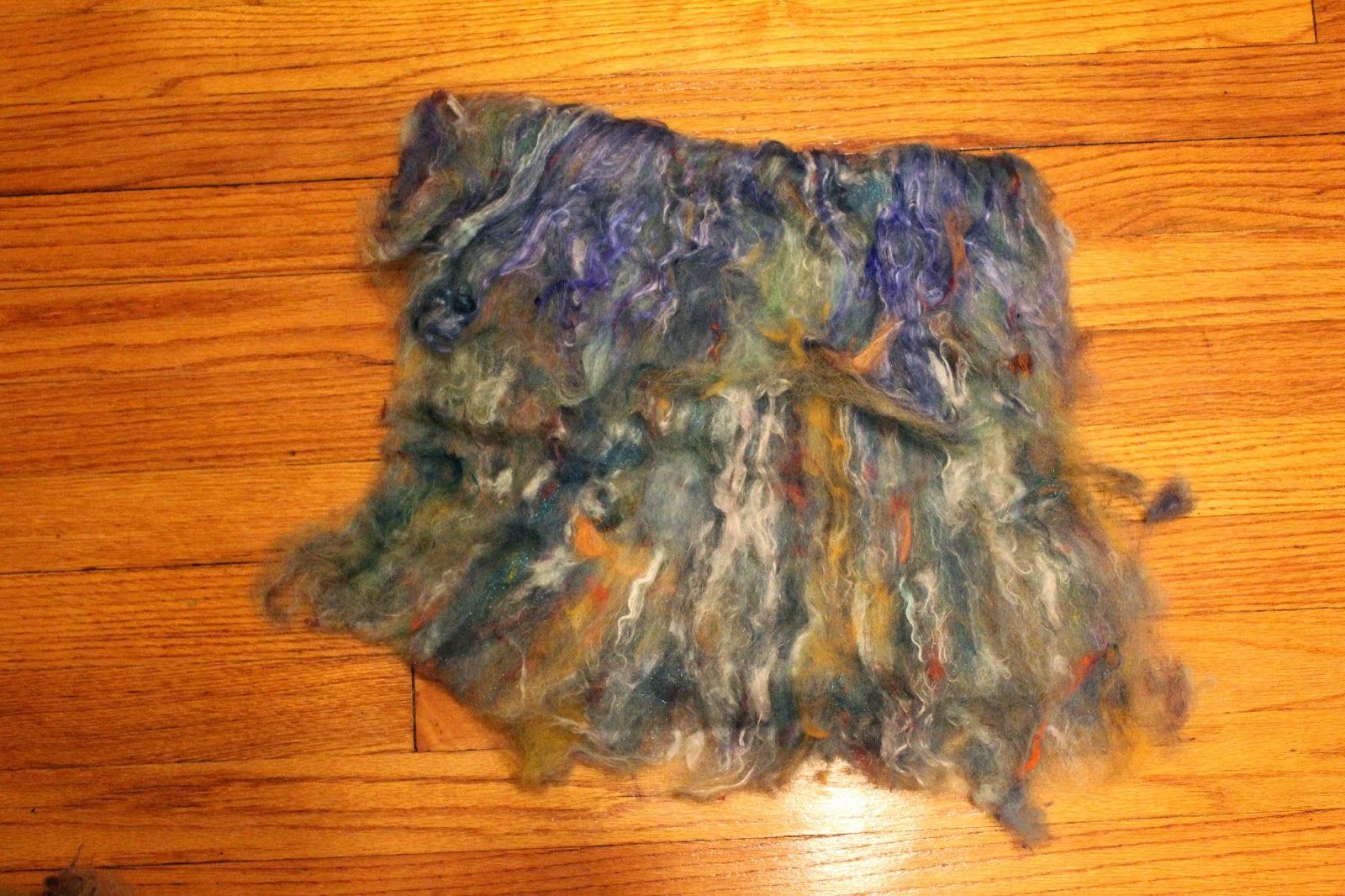 Three batts came in the bag, a blue one, a red one, and a yellow one. They all have a lovely hint of sparkle and a lovely squish to them. 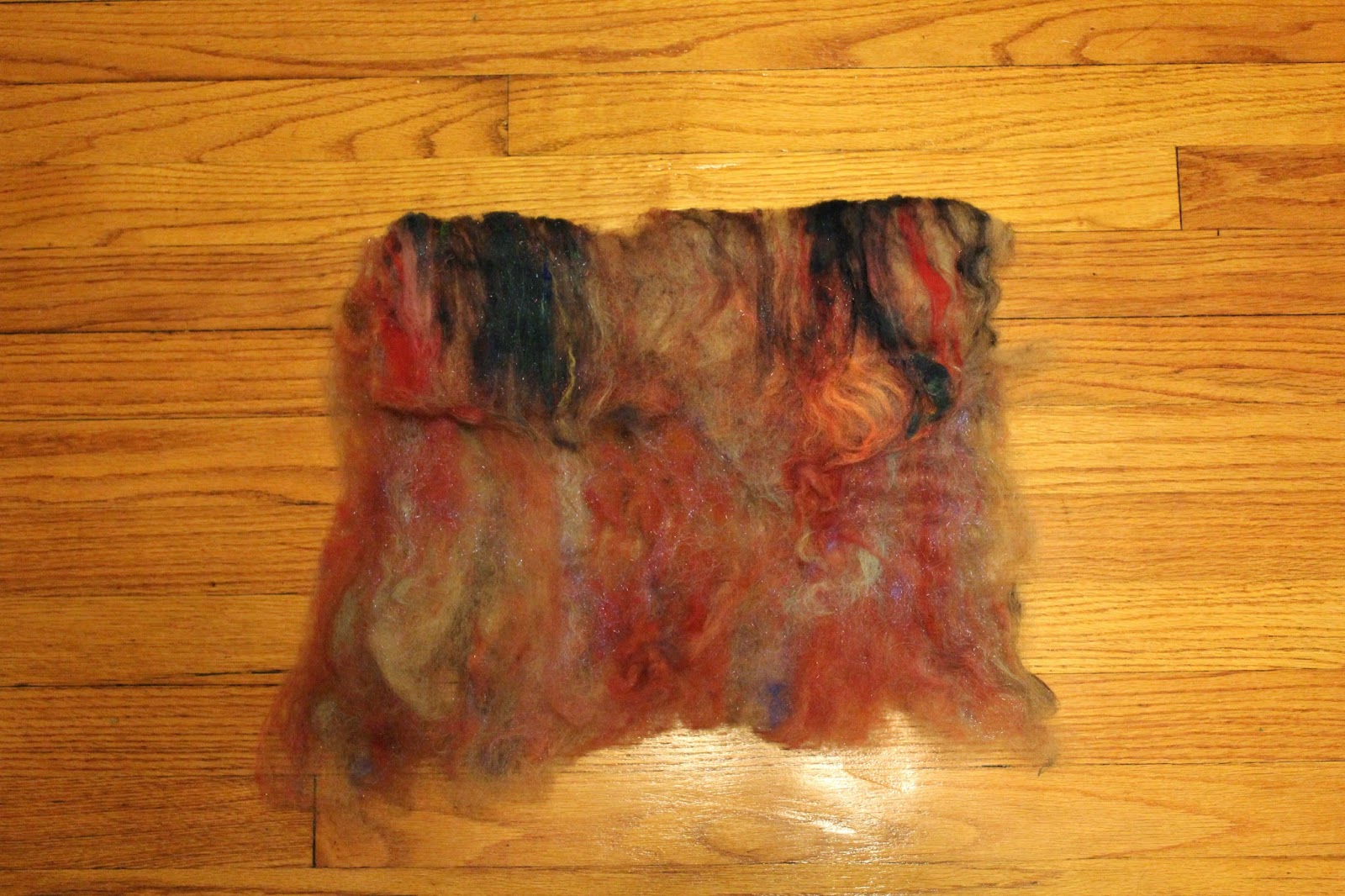 This red one is amazingly different on the top and bottom. I can't wait to see how it turns out! Once I figure out how to spin it - it seems most people split up their batts into roving-like bits. I'm pretty much thinking, it's already been prepared one way, if you wanted a different preparation, you should have bought roving! I guess I will learn. Time to finally ply the grey with rainbow bits singles that have been waiting ever-so-patiently by the wheel for over a month. 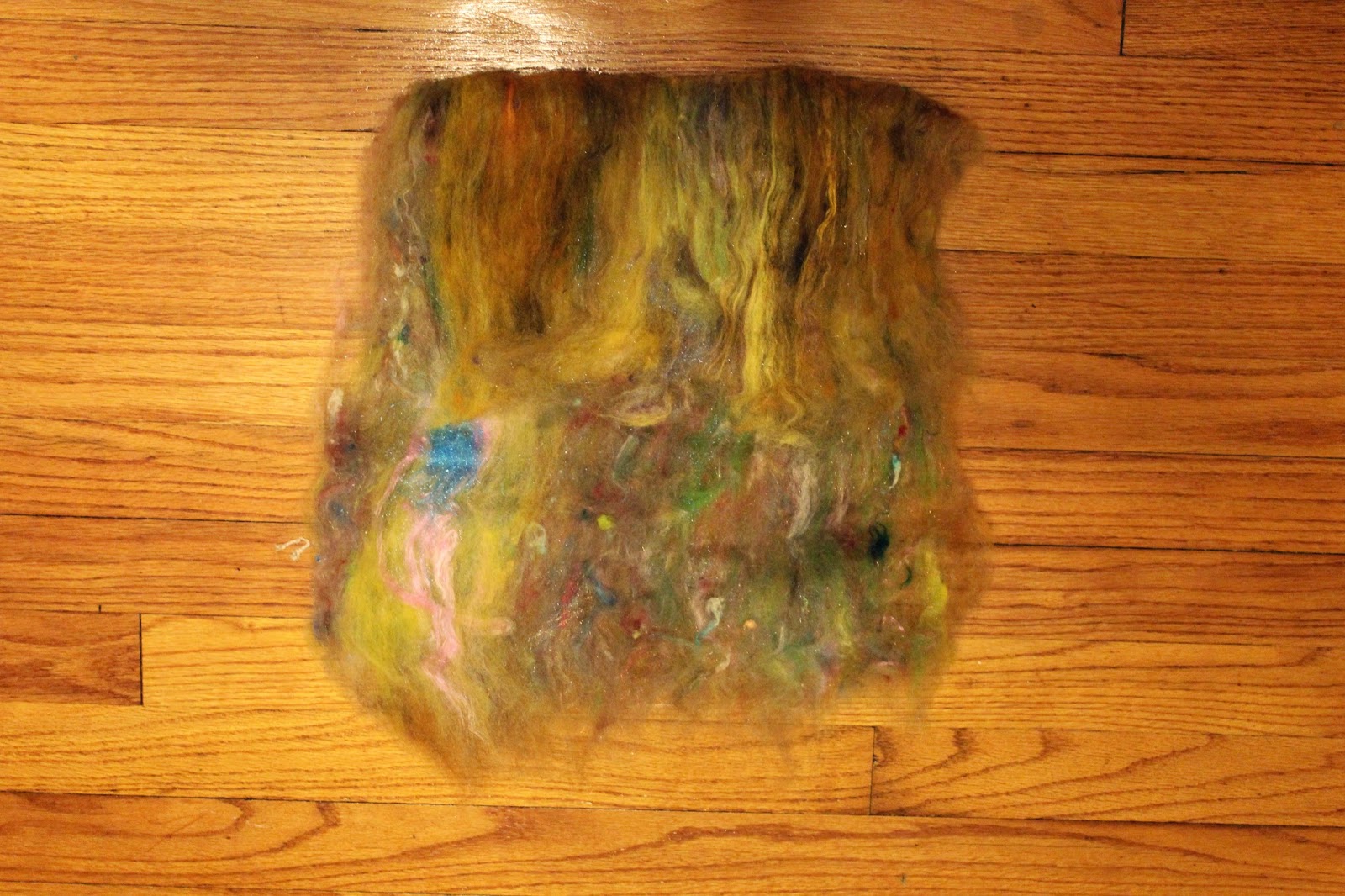 The yellow one is probably my favorite. It looks like Jupiter with the storm dot (on the left). They're so soft and squishy in batt form I hesitate to destroy their awesome with my mediocre spinning. If I didn't have to ply the grey and empty the bobbins, I probably wouldn't be hesitating at all!
Posted by AnaMarie at 8:03 PM No comments:

The good people at Steotch gave us eight options for finishing this year's stitchalong. I went with the one they used as their final version. Warning: Profanity ahead. 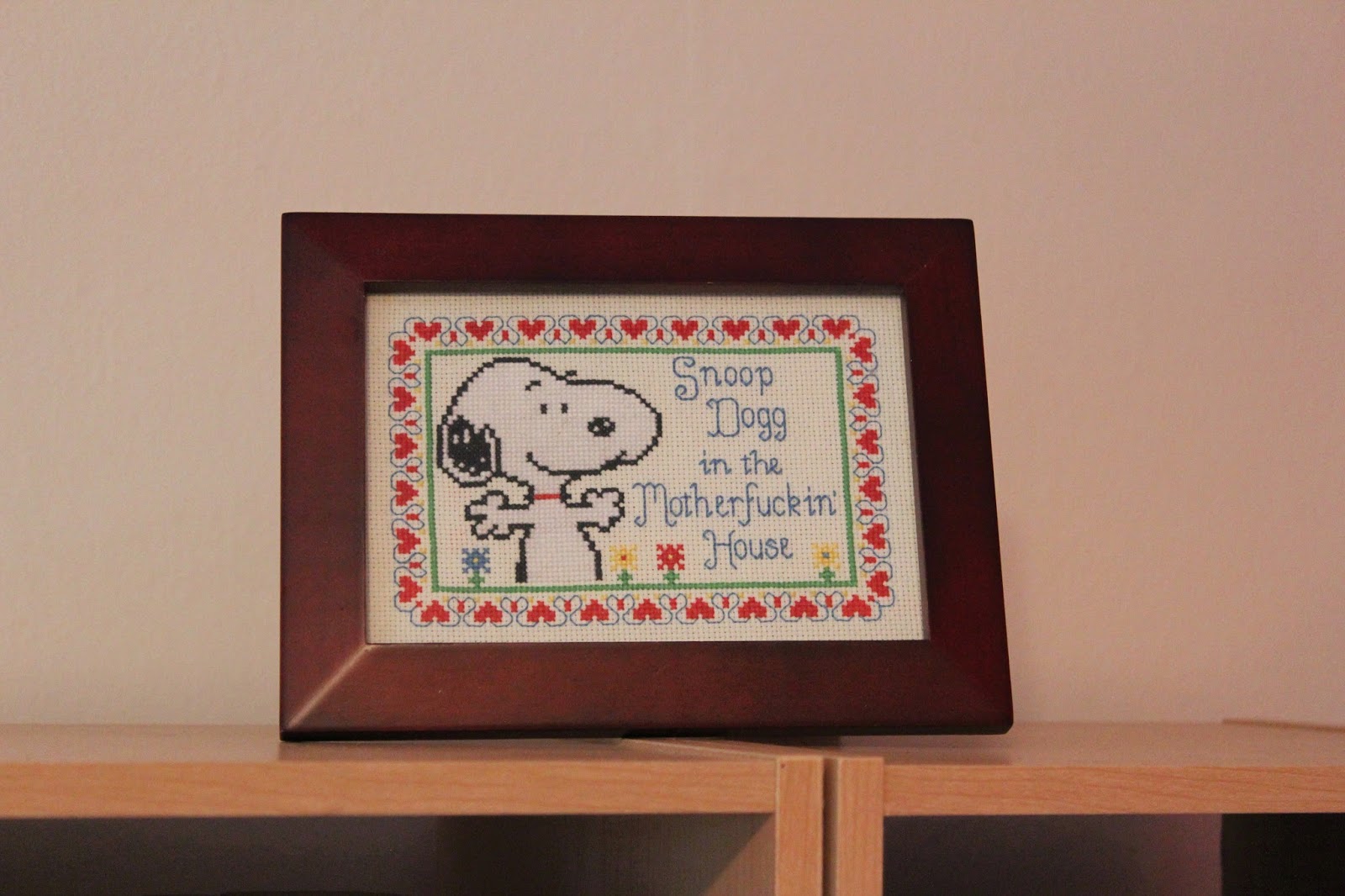 This one will be a gift. I'm not sure if the recipient has quite the sense of humor to appreciate the word choice; if not, I'll fix it next time I see her. I'm not thrilled with this year's pattern, but last year happened to be something so awesome and perfect for my household that it would have been very difficult to outdo. One project down, a billionty more to finish!
Posted by AnaMarie at 4:46 PM No comments:

I Caught the Stitching Bug

And it's really doing a number this time! Back in May I was already planning the next two projects after the wedding pieces once I learned that stitching while wearing the wrist brace kept my wrist from making bad movements. I cataloged my stitching stash (in Excel), went out to purchase the necessary items for a My Little Pony pattern and Dear Math (a pattern I purchased a while back), was very thankful that I don't keep track of thread miles, and finished the wedding pieces. Then I started looking at blackwork stuff for some reason (no really, I have no idea how I got there) and found a few more things I wanted to stitch. 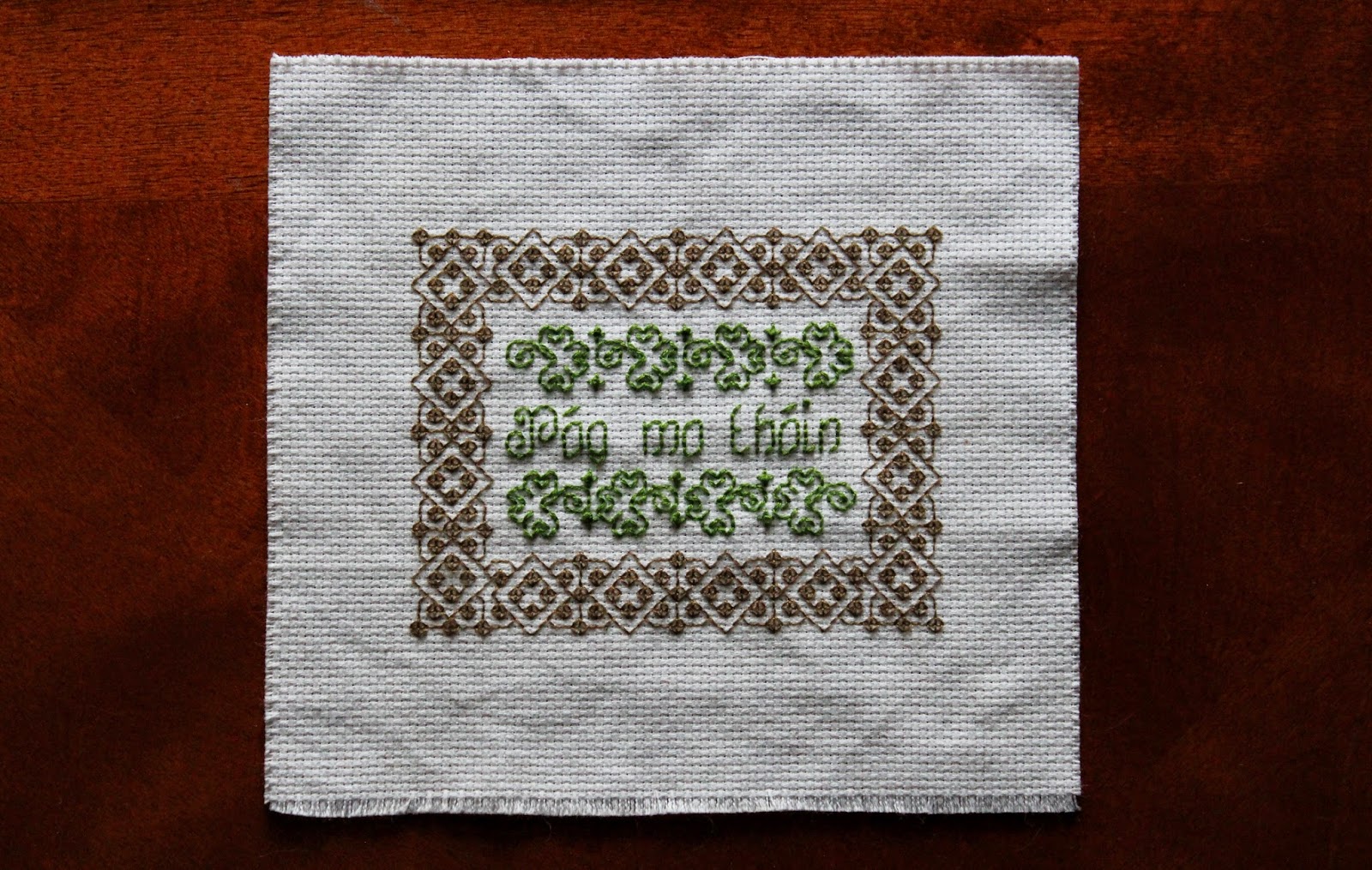 Like ten. Plus a few others that I'd like to stitch someday. Ten things I want to stitch NOW. 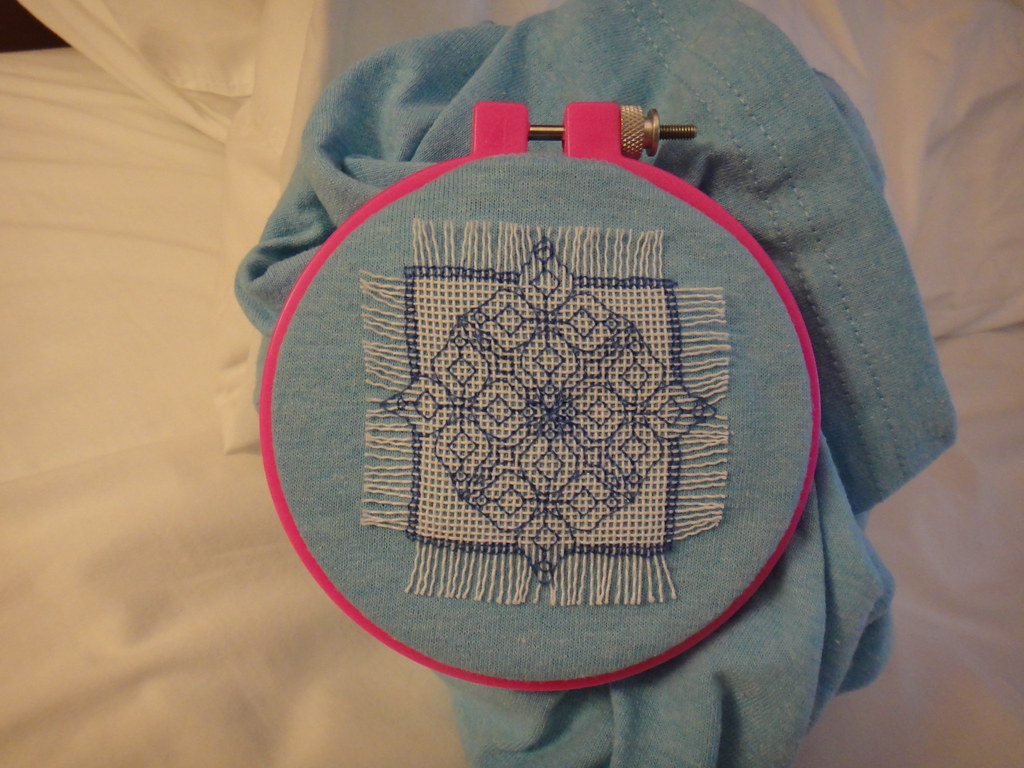 Thus far I kitted up fourteen patterns with fabric and thread, have another four with fabric that still need thread decisions, and bought a small kit when I had coupons at Jo-Ann's but everything I wanted was on sale.


I started and finished three rather quickly (okay, so I still have to wash and finish finish two), and have been keeping up with the Steotch Mystery Stitchalong. Then I wanted a quick finished object. So I started a fairly simple, all black, no backstitching piece, Quoth the Raven. 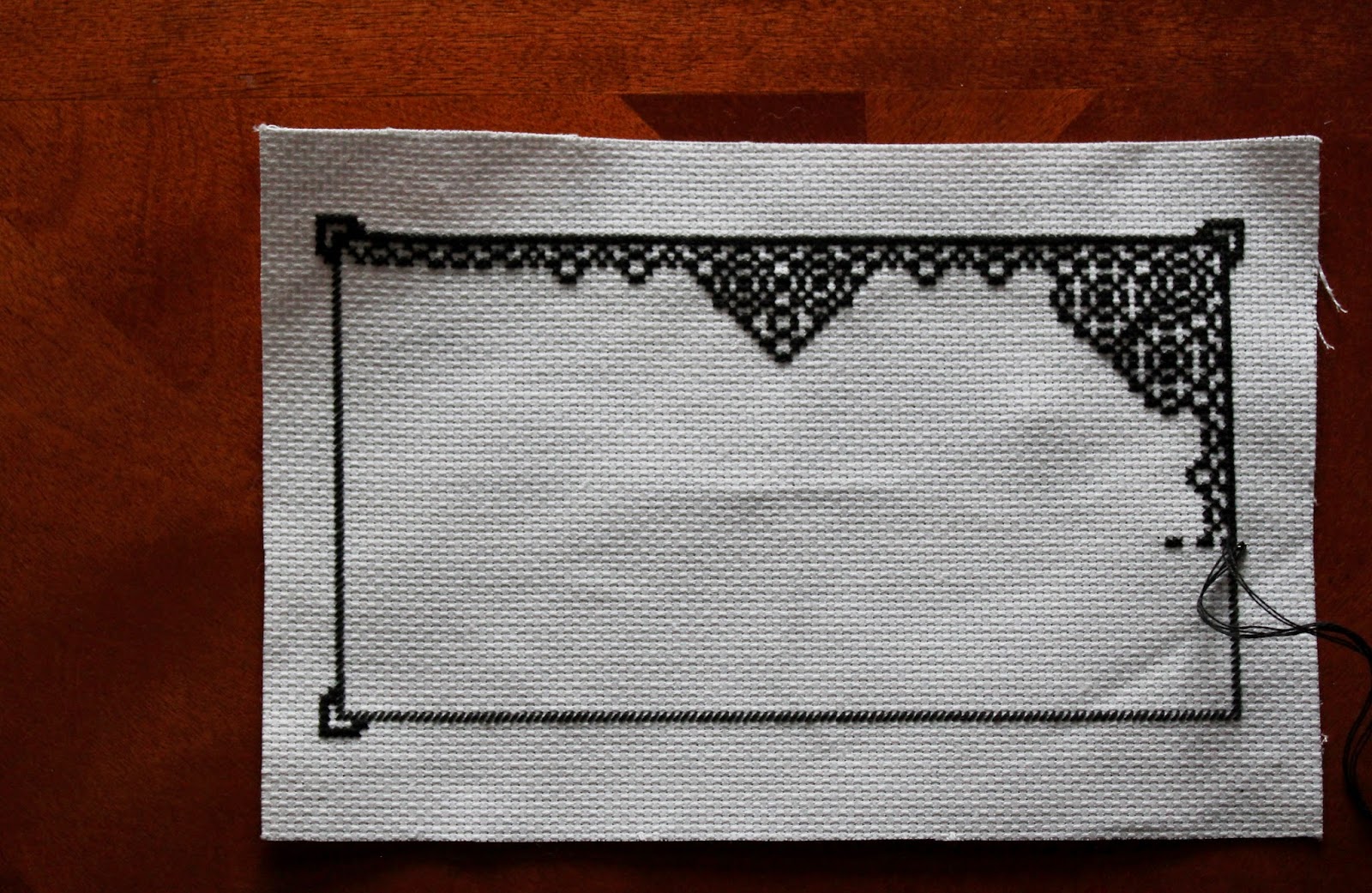 But it's on 18-ct, small, stiff fabric, and it's a lot of counting over 120 sts across with minimal white space. Not that fast. So I started that small kit I mentioned. 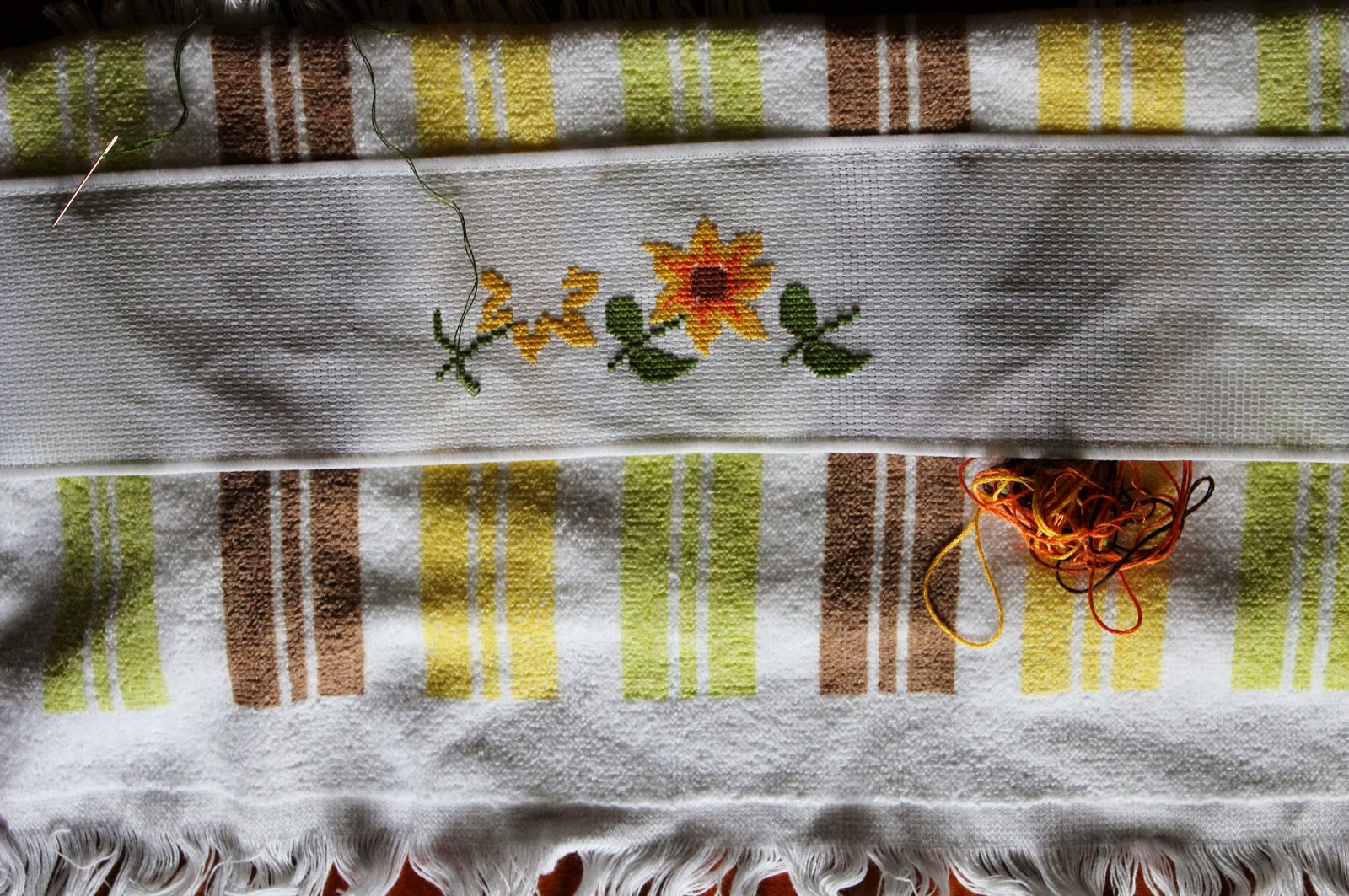 But instead of sunflowers across the entire towel, it's honestly just those three in the center. While that should make it shorter, it annoys me that 2/3 of the Aida is blank. I keep wondering if I can put one or two sunflowers on each blank third with the thread it came with so I don't yet have a definitive end and it's less mindless than I'd like. So I started one of the blackwork patterns I kitted up. 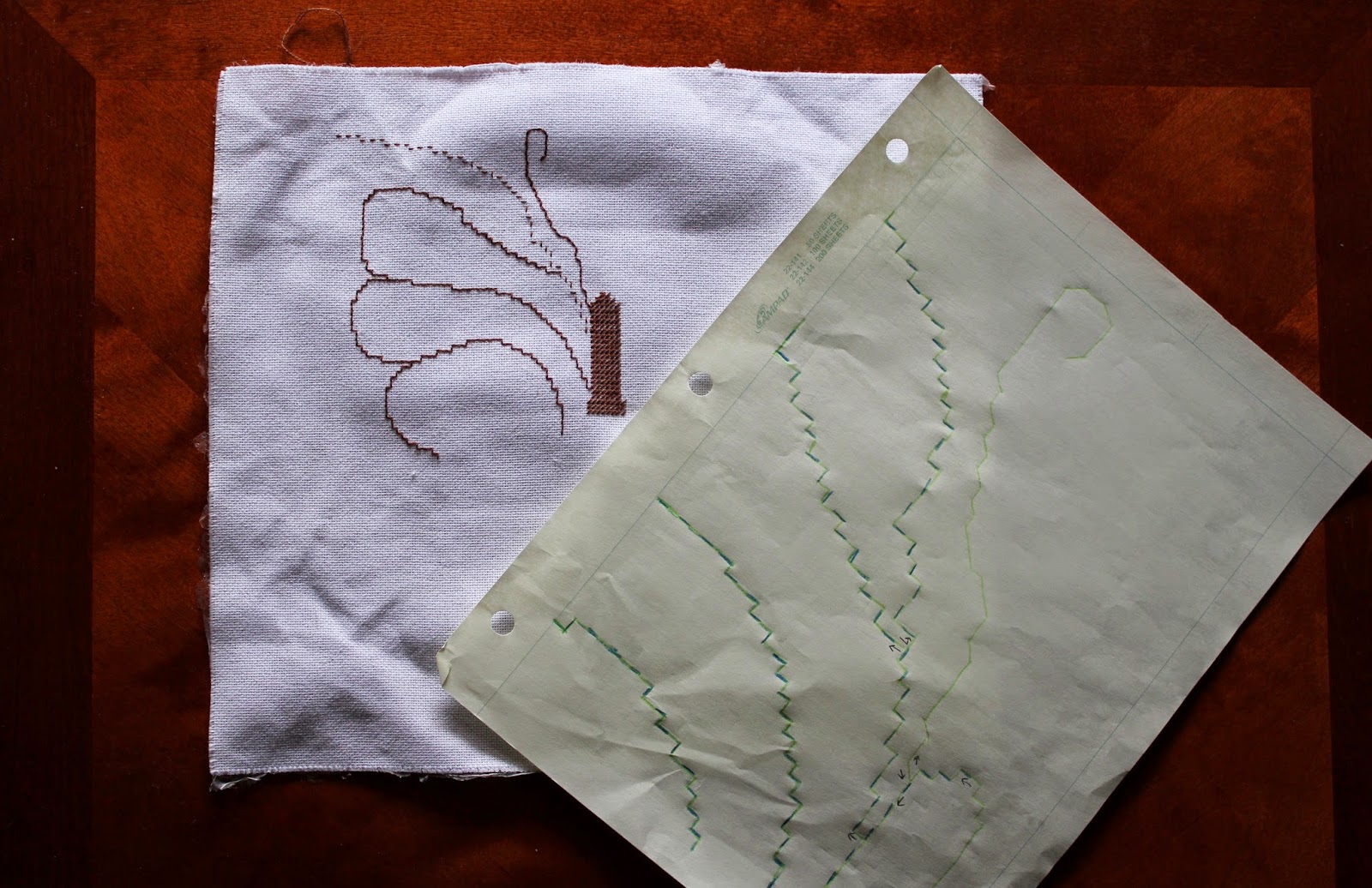 But I have to really think about how to go about doing the outline. Like, pages of engineering paper and colored pencils to figure out what the heck I'm doing. So I started a 79 x 81 stitch simple pattern, no backstitching, 14 ct Aida, and a bunch of whitespace (or yellowspace, as the case may be). 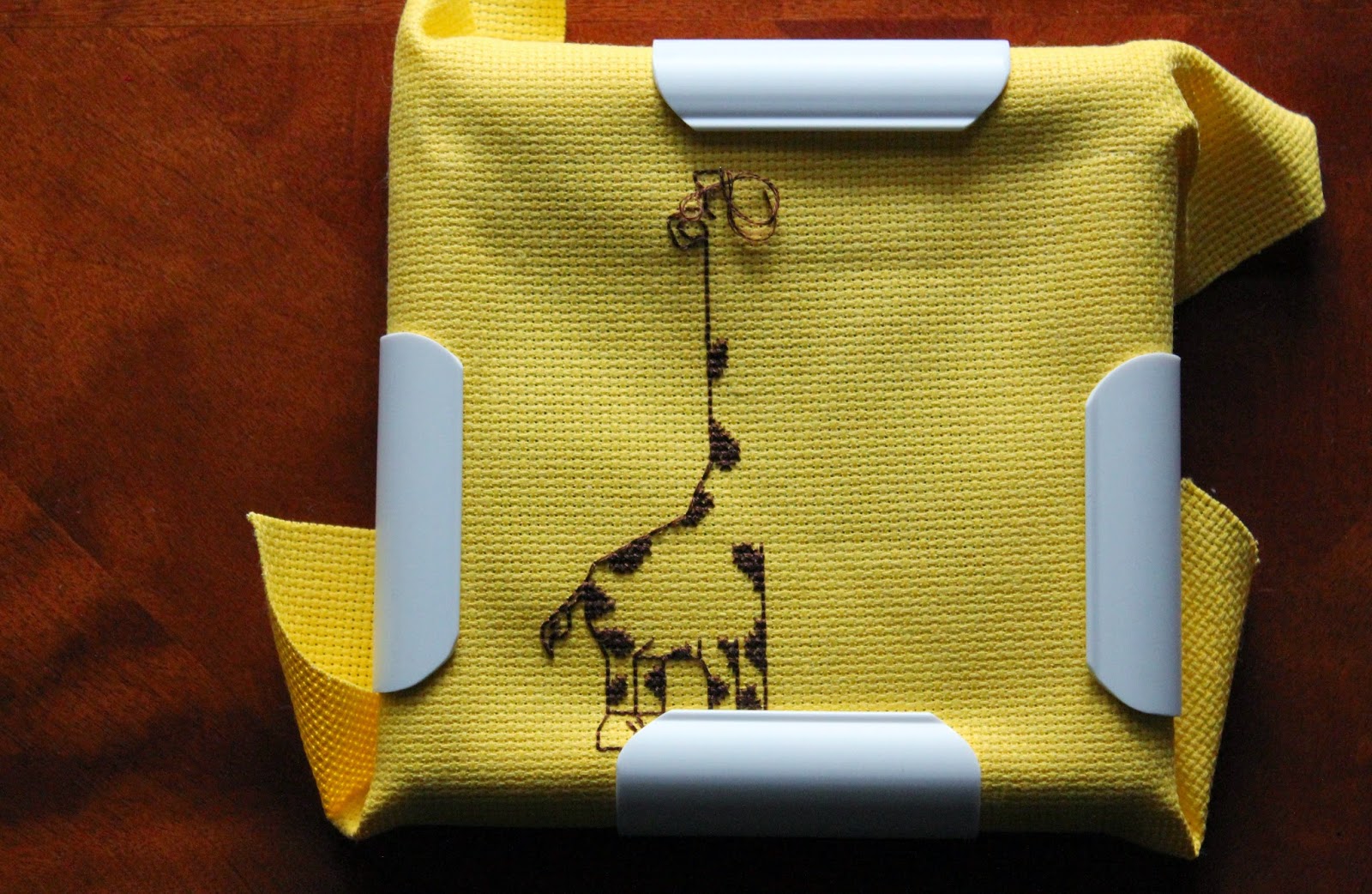 In my PhD program, our qualifying exam is called the Readiness Assessment Test, or RAT for short. My husband just had his oral defense, so I baked a rat cake for him: 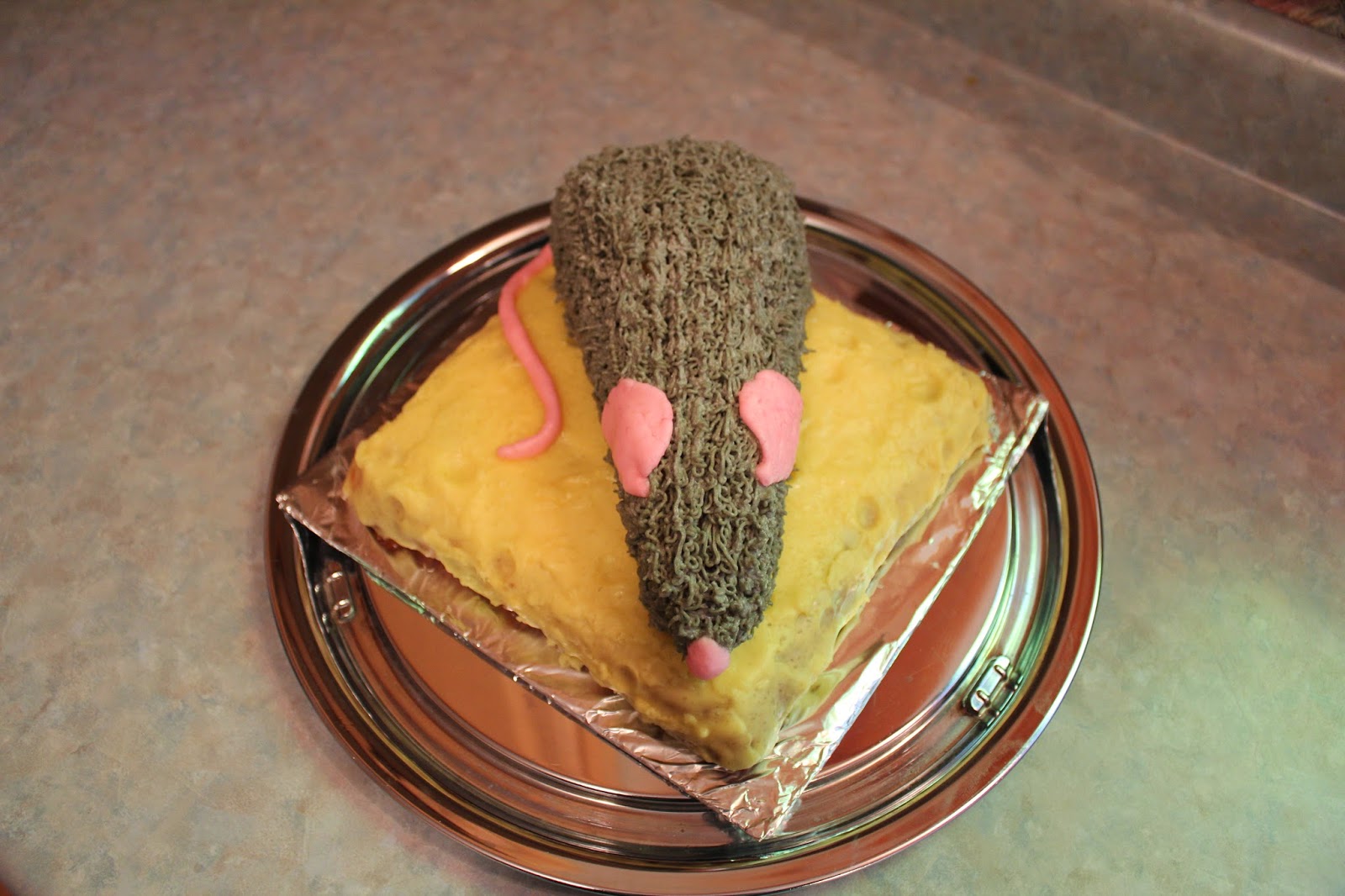 I should have taken in-progress pictures. It turned out very well, amazing considering I've never done most of the techniques I used for it. The poured fondant on the "cheese" cake base was a bit spotty on the sides, but no one really cared. 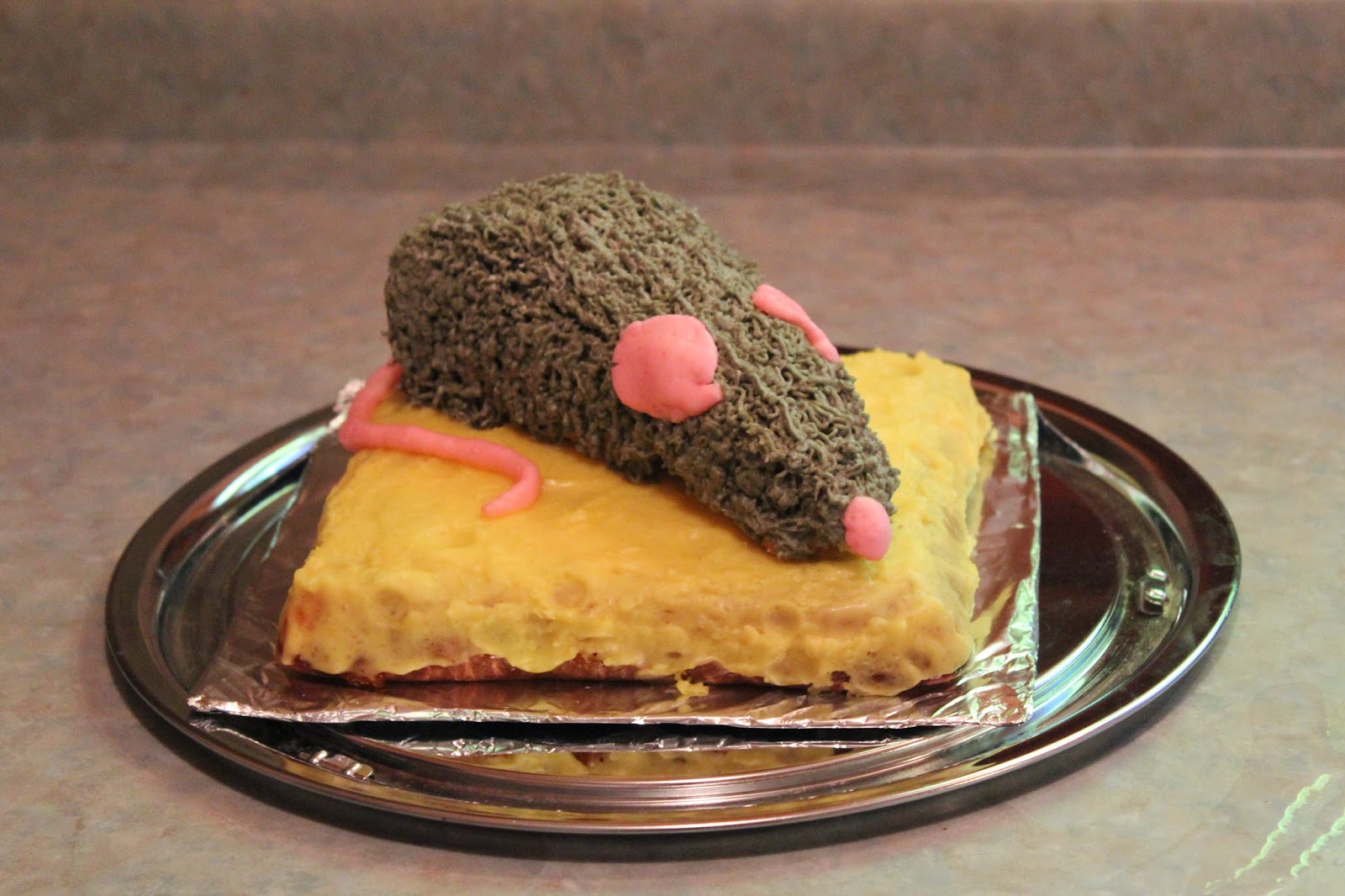 Both cakes were quick one-bowl cakes from Joy of Cooking, the Blitzkuchen recipe. I baked the rat in a loaf pan, then cut it and shaped it in a triangle-ish shape, kind of like a pinewood derby car. The "cheese" cake was baked in an 8"x8" Pyrex square pan. Both had a warm apricot jam crumb coat. I made almond-flavored fondant and used it in a couple of ways. I covered the "cheese" with yellow poured fondant and made some of the rest pink for the ears, nose, and tail. The rat is frosted with Joy of Cooking's Creamy Decorating Icing, a shortening/powdered sugar/milk blend flavored with a dash of almond and vanilla (that is pretty much exactly the frosting my grandmother always made). I used a grass/fur (multi-opening) tip but instead of using it in the traditional way and making the "fur" stand up, I dragged it slowly across, allowing the strands to curl like fur. I like it better than the usual fur frosting method. I considered making eyes and whiskers but figured I'd stop while I was ahead and leave it be. 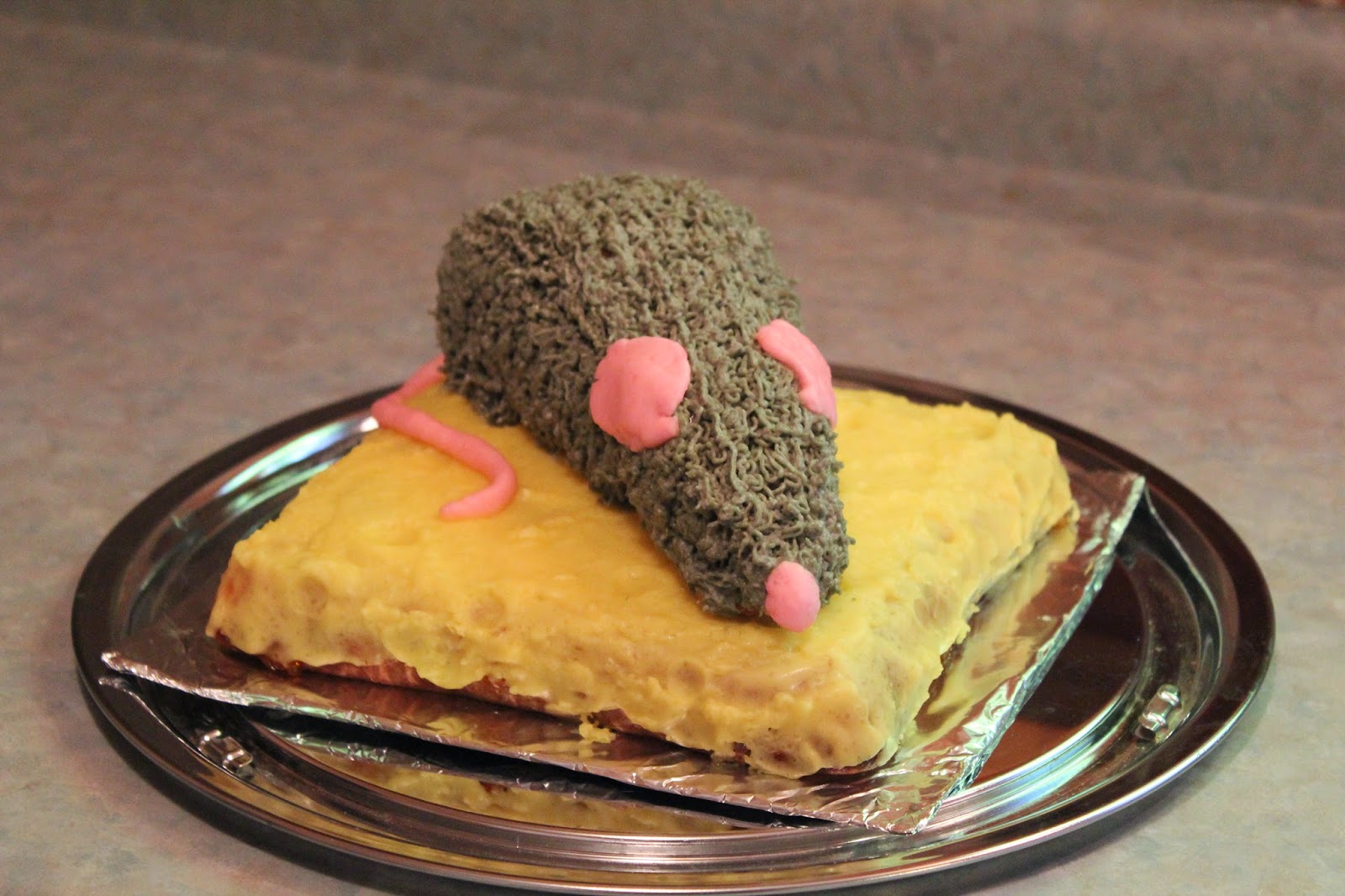 Everyone enjoyed it, and I learned a lot. Things like:
Any requests?
Posted by AnaMarie at 6:10 PM No comments: 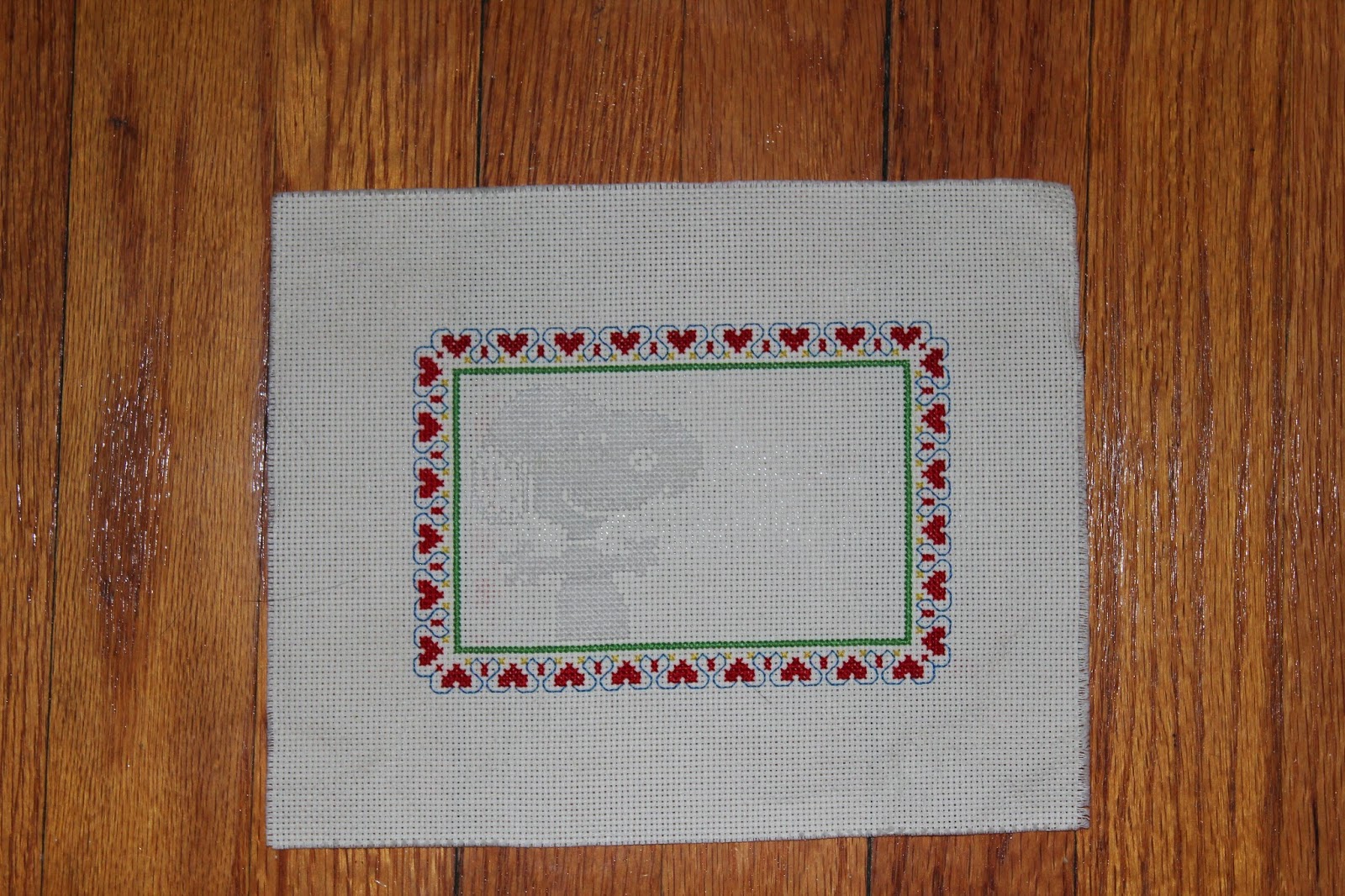 And now, one more clue left, and it's looking great so far! 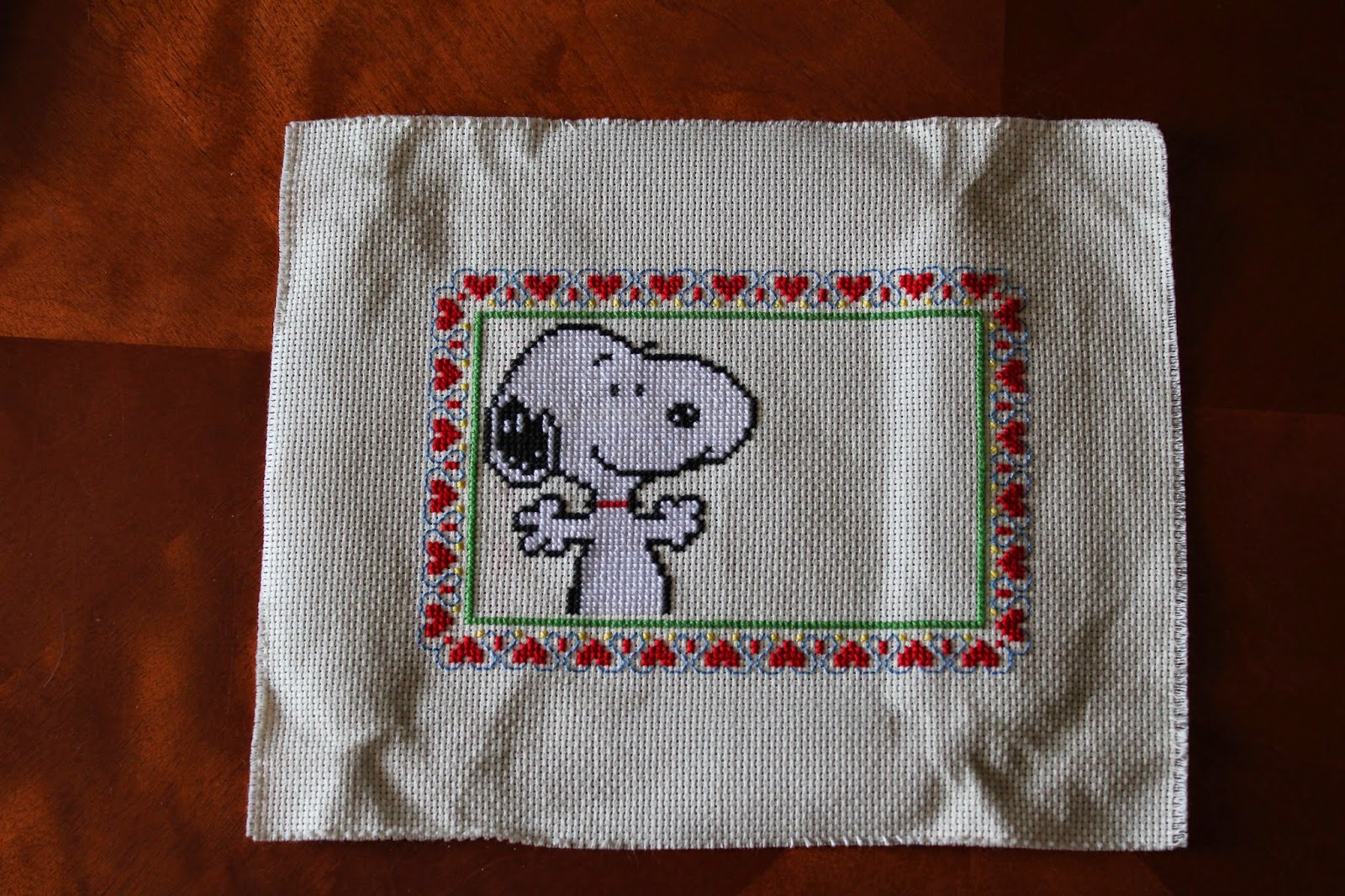 I'm hoping there will be a Snoop Dog quote to finish it up. We'll find out on Sunday!
Posted by AnaMarie at 6:45 PM No comments:

I came across an adorable set of a mama chicken and her baby chicks, something that would be perfect for an older toddler and would use only scraps (and one purchased skein of white because I ran out). 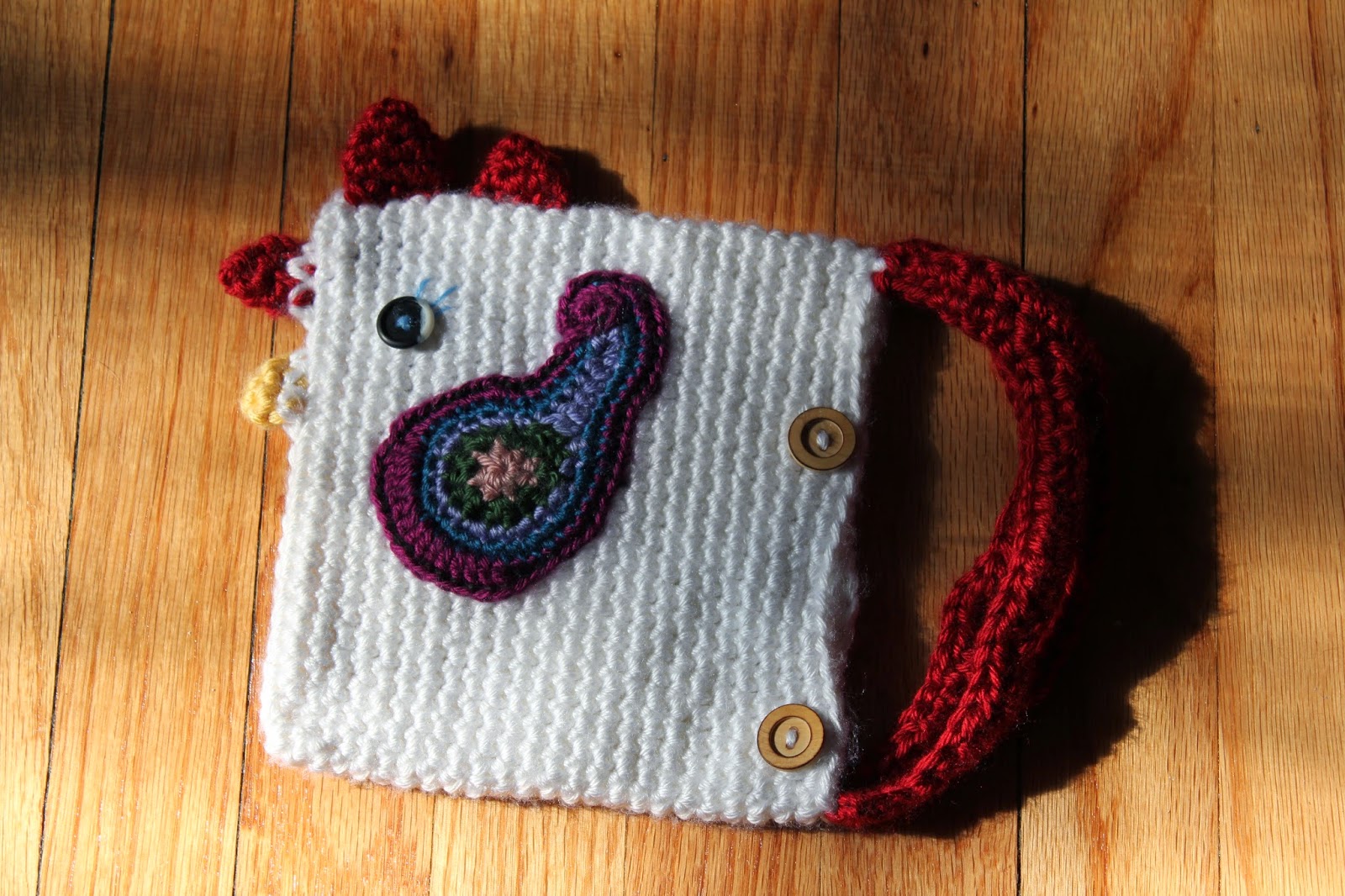 Pattern: Mama Chicken Bag (Ravelry mine)
Yarn: Caron Simply Soft in many colors
Hook: 4.0mm/USG for the wings, 6.0mm/USJ for the rest
Timeframe: June 25 - July 6, 2014
Mods: Two wings, one color for the tail, added the comb.
Problems: The wings are a bit big because I used smaller yarn for the body, but that's okay. 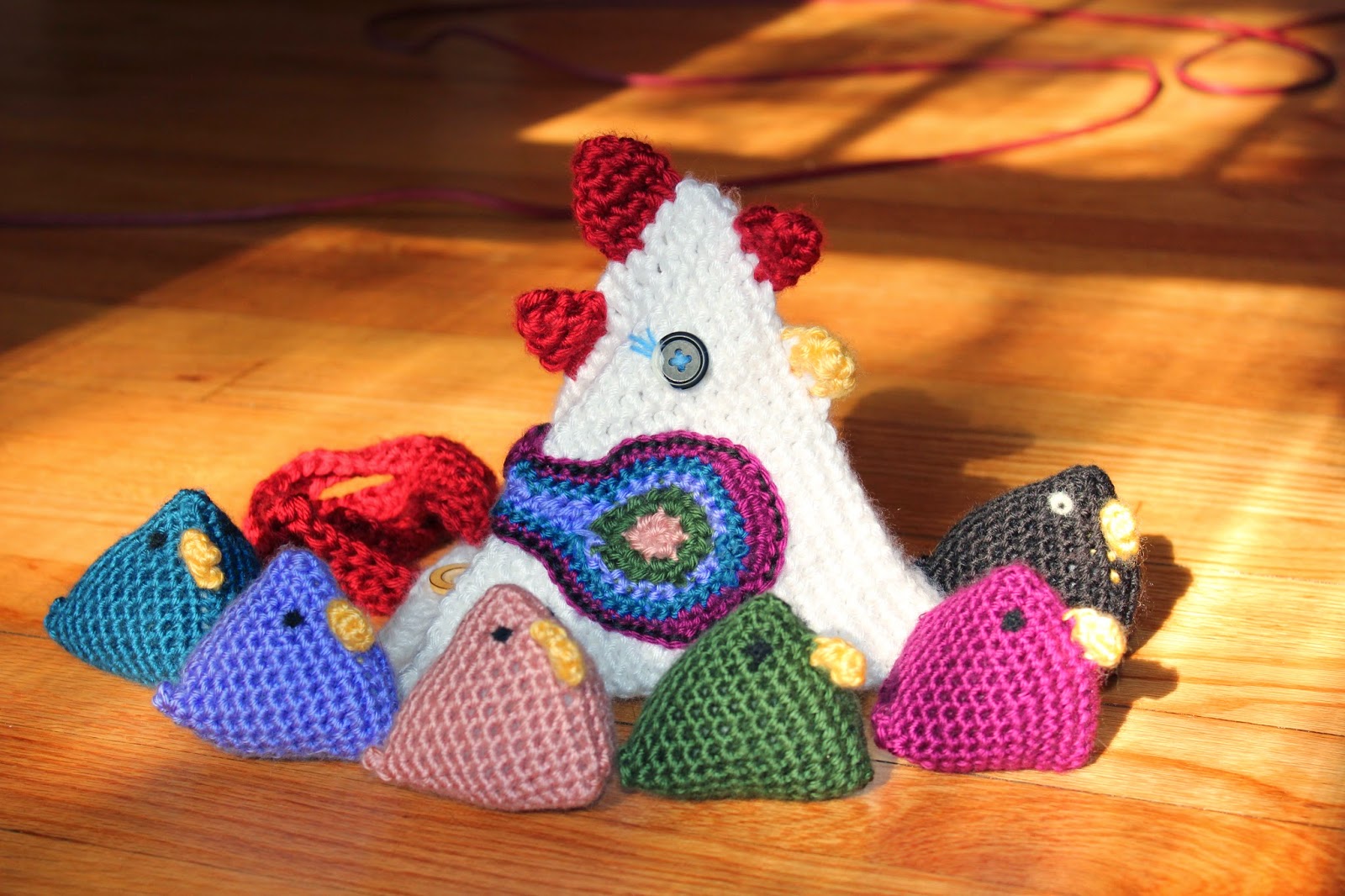 Six of these chicks match the paisley colors of Mama's wings. The seventh is scraps from another project (coming soon!) because the black cat kept stealing the chicks as I was trying to make them. She doesn't particularly like it unless it's in with my crafting supplies and she has to steal it. Cat logic.

Posted by AnaMarie at 5:01 PM No comments:

After the sets of hats and booties, I had very little yellow Caron Simply Soft left. I was intending to make a stuffed duck for a gift and wanted to double the yarn to make it a bit larger. 16 yards is not that much, even for a small duck. Doubling the yarn made it impossible. Do I buy more? Double it with another color? Pick another creature to make?

Luckily, I had another reasonable (though not as soft) yellow in my stash: 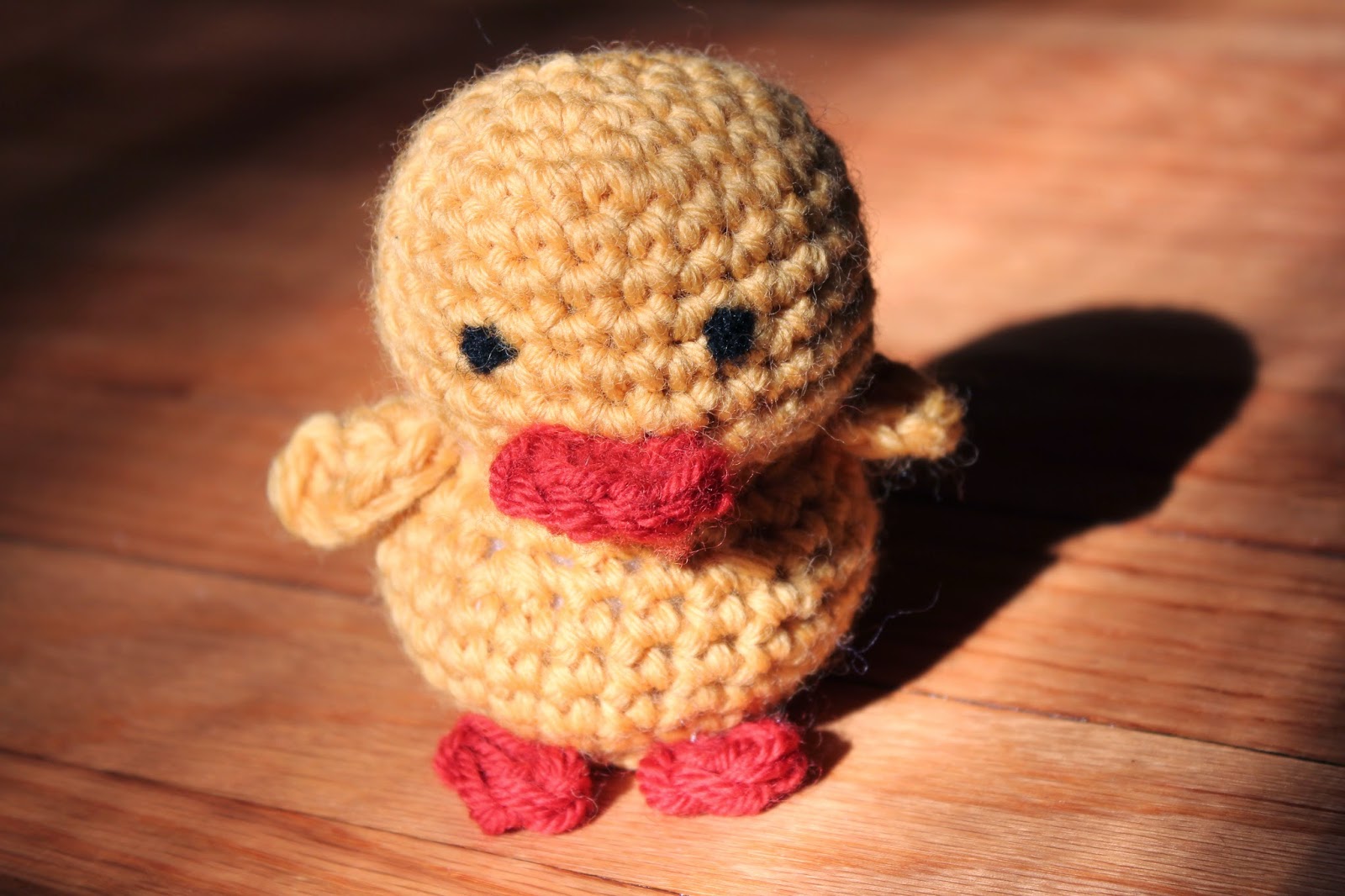 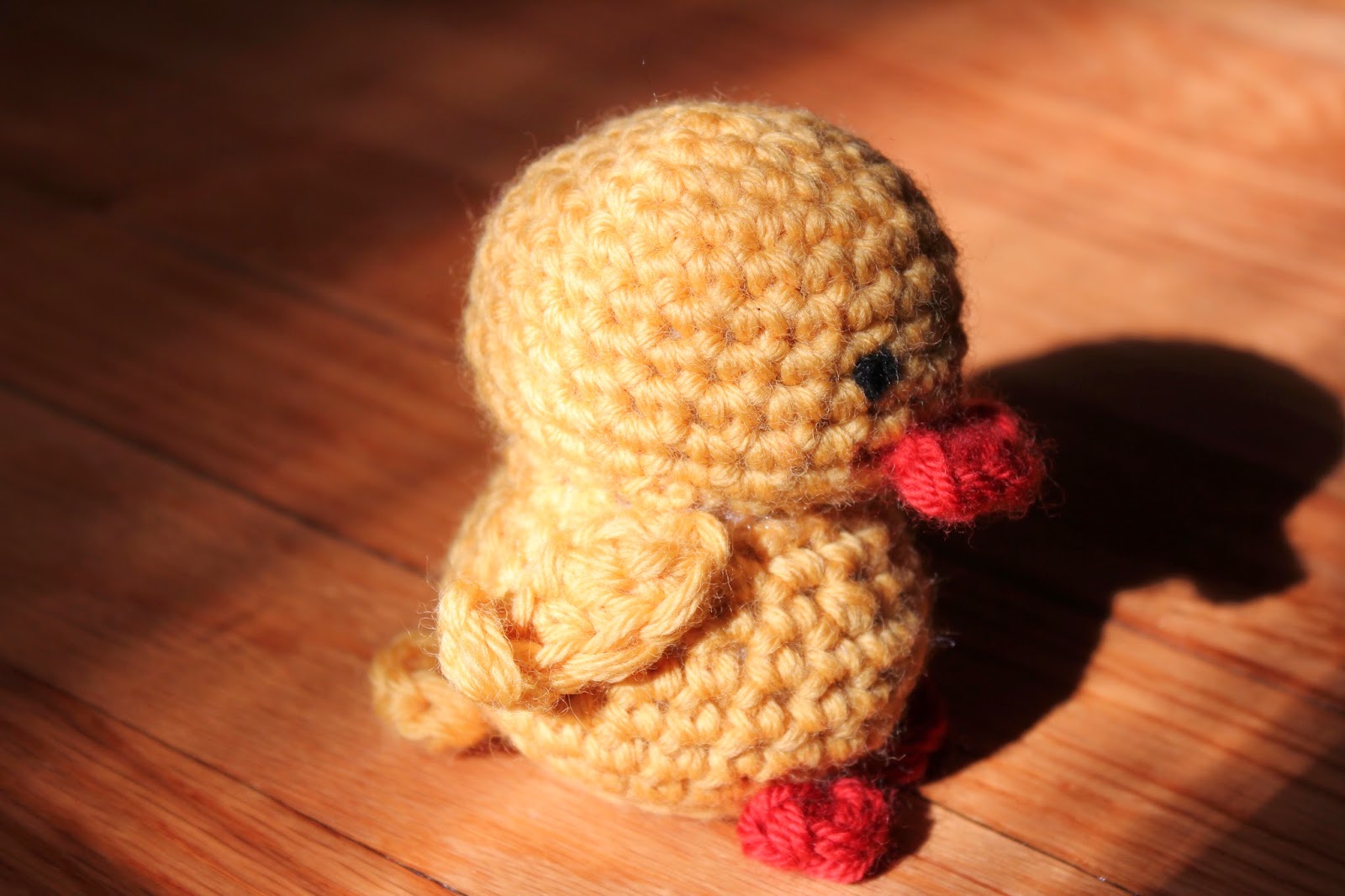 I love the little curl in the ends of the wings! I also made a little stuffed owl: 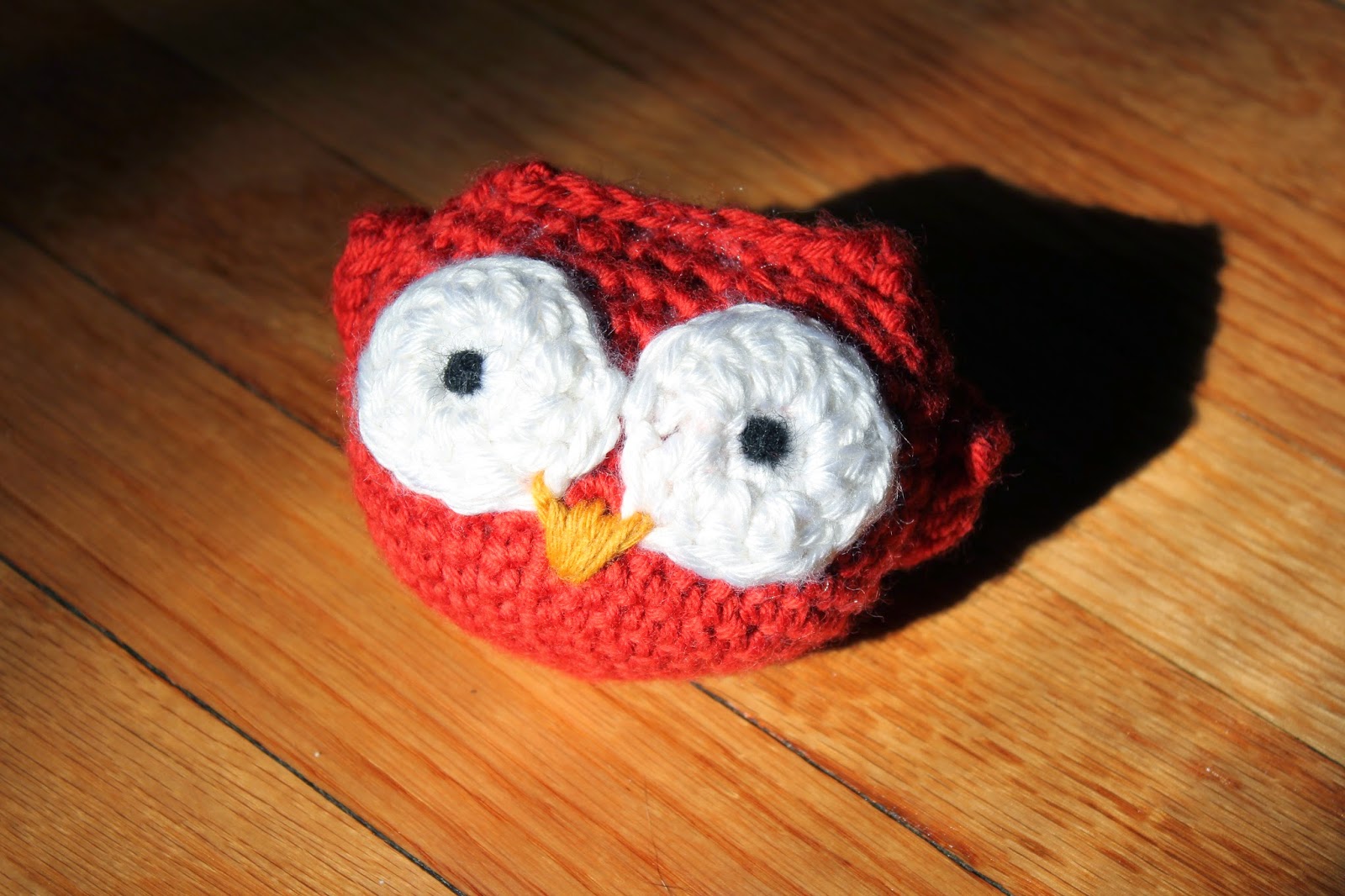 Pattern: Confused Owl (Ravelry mine)
Yarn: Caron Simply Soft in White and Cascade 220 Superwash in Burnt Orange
Hook: 6.0mm/USJ
Timeframe: June 22 - , 2014
Mods: Doubled the yarn, used a larger hook, crocheted rather than felted the eyes, and needle felted the pupils
Problems: None!
Posted by AnaMarie at 6:35 PM No comments:

The backstitching on Snoopy will be so, so wonderful when we finally get there! 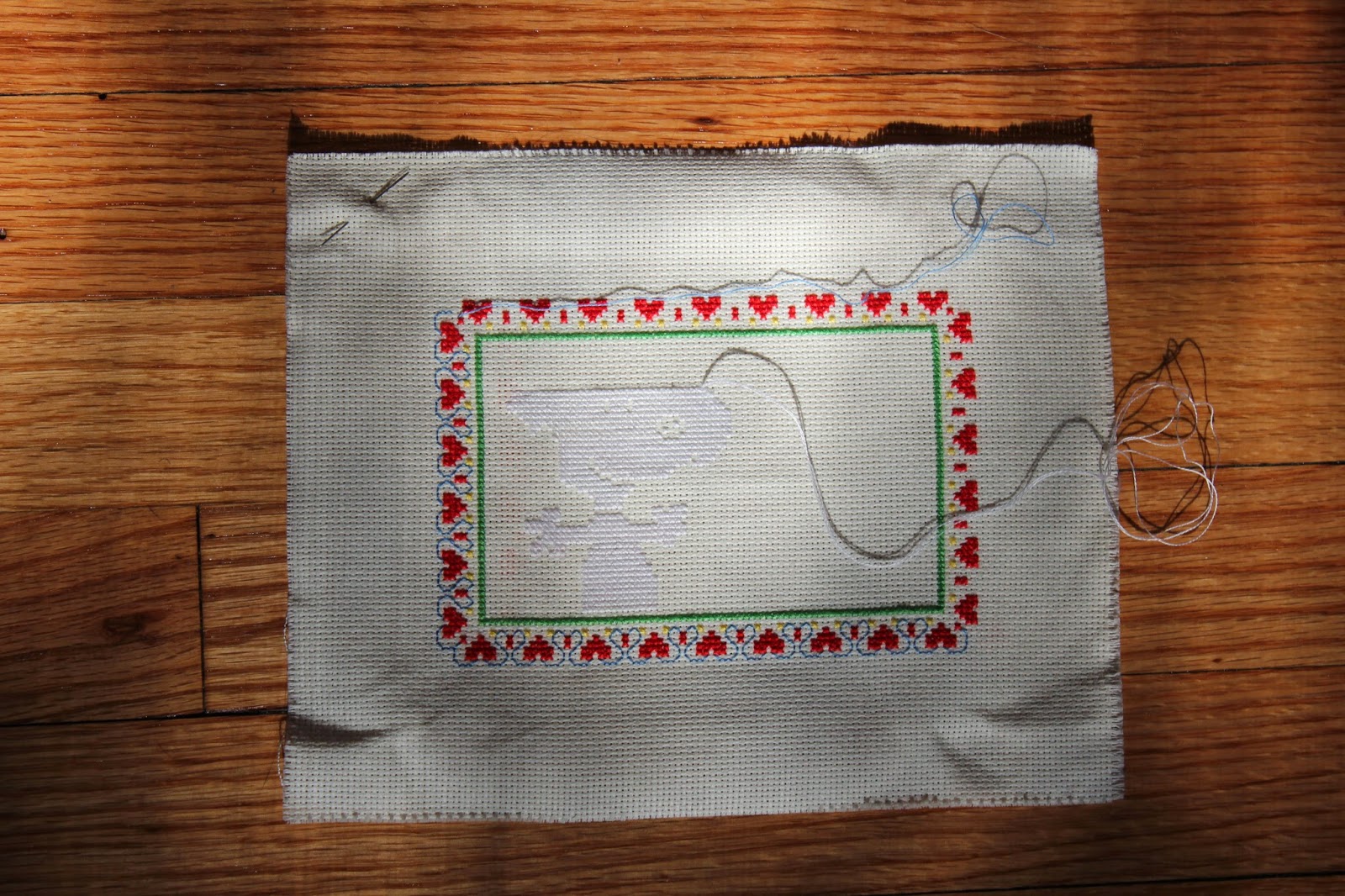 Posted by AnaMarie at 6:44 PM No comments:

I was able to knit more than I did in May, but not as much as I thought I would. Then I took advantage of the craft store 4th of July sales on June 29th. I managed to only get yarn for Christmas gifts and didn't buy the seven skeins of Patons Classic Wool to make a Keyhole Tunic for myself. It's still a lot more in than out this month!

Posted by AnaMarie at 5:54 PM No comments: