So, I've gotten the two buntings done, decided to not do the bibs because the yarn for them is big and bulky so not good for tossing in my purse and going and if I do more bibs I won't have enough yarn for a bag for myself, am going to have the booties done in time, and vetoed hats when the first one was able to stretch to fit my head. Not baby sized.

My biggest stumbling block: The party is at noon tomorrow. I have two engagements this evening, as well as picking up buttons for the buntings. I also have no dress, and realized, luckily before going too far, that the way the Japanese dress pattern pieces are printed, you need to add your own seam allowance.

They have little lines where your tabs go for lining up the pieces. These lines must be extended 1.5 cm out and you have to cut out an offset for your seam allowance. Who does that? Why would you not have the seam allowance built in? Especially when there are edge markings that need to be involved? Apparently Japanese patterns do. It's not that much more paper, I buy a pattern for the ease of it all, why are you doing this to me?!?!?!?! At least I realized before getting myself into too much trouble! I only cut out a piece from the interfacing and it shouldn't be a problem.

The paper is also a bit strange. I'm pretty sure it's parchment paper, which is odd because I haven't been able to find any for baking. It's probably at the larger stores, but I haven't been to those recently and don't believe I've checked when I've gone in the past.

Why do I do these things?

I went shopping at the local craft store, Craft Heart Tokai. It's like a Jo-Ann Fabrics; it has fabrics, craft books and magazines, knitting and crocheting supplies, sewing notions including a lot of purse handles and buttons, beading stuff, and whatever the hottest craft fashions may be. I got a lot of stuff. 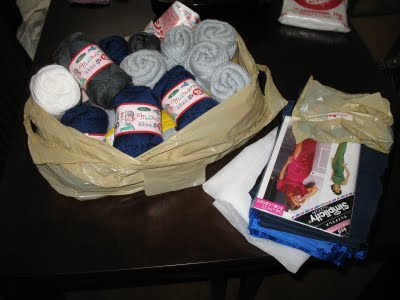 That's 20 skeins of yarn and 7.2 meters of 120 cm across fabric. With assorted zippers and buttons, though I forgot to get matching thread (I probably have some here anyway) and will need more buttons.

I have another two skeins of yarn to add to this pile, and we'll see if I can get through the majority of it...by Halloween. That's right, I'm going to a costumed double baby shower on Halloween. I have no costume, so the fabric is for a blue dress to go with my devil horns. Devil with a blue dress on, get it? Out of the twenty skeins of yarn, half plus the other couple to add are baby shower gifts. Or at least, should be. For each of the two soon to be new mothers, I want to make:

1 Angel's Nest bunting in grey with white stripes to be gender neutral (because I didn't ask if they know).
1 pair of Sneaker Booties in green for gender-neutrality.
2 Modern Cabled Baby Bibs in brown and natural/white, again for gender neutrality.
and if there's time, a bonnet or hat to match the bunting. By Halloween.

I think I can do this, because I've already nearly finished the first bunting and I still have a week and a half to go, including a full weekend and Saturday if I need it since blocking won't matter with all the acrylic*. Also, the buntings are the largest items to make, though the sneakers might be the fiddliest. Buntings, bibs, sneakers, then hats if there's time, that's the order I'm planning to do it in. Along with finishing the black thread on my machine by continuing on my languishing box bags and then working on my dress, I should be (maybe) able to finish this all in a week and a half. Yes, I will fully own the fact that I may just be crazy.

*Yes, I know, acrylic will melt to your skin in a fire, but there is a very limited selection of items at my LYS, new parents will NOT handwash regularly and therefore something that needs handwashing won't get used, and I'm doing this one on the cheap. Also, if the baby is near enough to a fire to get acrylic melting to them, there was very little hope in the first place.
Posted by AnaMarie at 5:58 AM No comments:

The Spirit of Things

Halloween's a'comin'! To get into the spirit of things, I did a test knit for Fickle Knitter Designs, a cute little bat ornament. Th 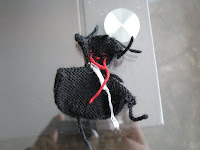 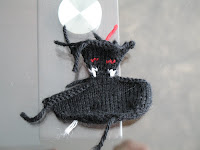 them together, and the seaming also takes a bit of time. Well, it takes time if you don't want to do it. I'm not a fan of seaming things for the most part. I love seaming sweaters simply because I like to make it look seamless from the right side, but seaming toys and other small things is just a fiddly annoyance. This is why I can't seem to finish the simplest amigurumi in less than a couple of months. 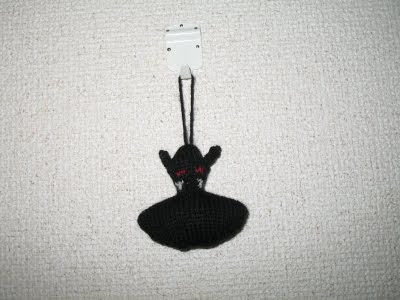 Pattern: Little Bat Ornament (Ravelry)
Yarn: Knit Picks Essential in Black, Brown Sheep Wildfoote Luxury Sock in White, Cascade Heritage in Red, all scraps from socks (future socks in the case of Cascade Heritage)
Needles: US1/2.25 mm, 2 DPNs
Timeframe: October 7 - 11, 2009.
Mods: I moved up the "face" on the back piece to see how it looks, but I like it better as written.
Problems: No problems, especially once I realized I didn't have to weave in all the ends!
Posted by AnaMarie at 10:32 PM No comments:

Last time, I had issues with the correctly sized needle.  This project just seems to be bad luck or something.  At this point, it's finished except for weaving in the end and blocking, but it took me multiple tries with the correct size needle before I could get passed the setup! 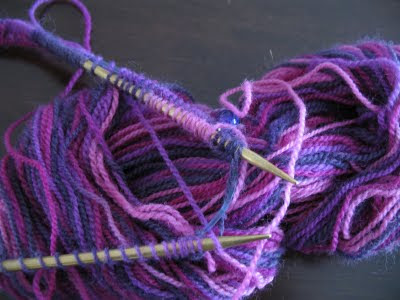 For this attempt, I thought I miscounted the cast-on, and then managed to pull about twenty stitches off of the needles while knitting the first row.  Everything got pulled out and re-started. 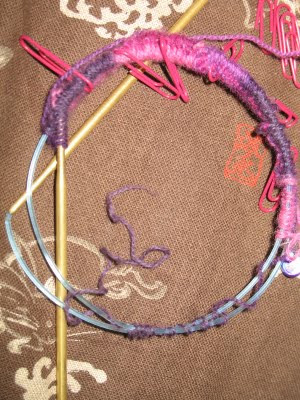 Counted, re-counted, and counted the number of cast-on stitches again.  Third try is a charm right?  Not so much.  Apparently, I managed to cast on too tightly, so broke the yarn.  Third time being knit and frogged, it was weaker, but I was still quite upset.

Finally, success!  Well, mostly - I had to finangle the first row a bit and find out where the missing couple of stitches were, but in the end I had the correct number of stitches on either side and a working mobius.

Now, because I am a lazy bum when it comes to uploading pictures and posting, I have that one plus a second cowl finished except for the blocking.  Two more to go for Christmas presents, some box bags, a pair of gloves and a pair of socks, and then something for my sisters.  What exactly, I don't know, but something!  And of course, two lovely little test knits I've signed up for - I gotta stop doing that!
Posted by AnaMarie at 10:46 PM 1 comment:

Yes, I am a bonehead.

I realized it's almost October, and we're planning to send Christmas gifts home in just over a month, so I should really be closer to done with my Christmas knits.  I have two about done, and need to make four more cowls, a pair of knee-highs, a pair of Knotty gloves, probably box bags for all of them, and maybe some small things for my sisters.  Not sure yet.

I pulled out my Addi Turbo Lace, the only Addi needle I own, and cast on a 144 stitch Mobius cowl, and for anyone unfamiliar with the mechanics of a Mobius (I've only tried it once before) you actually cast on double the base number of stitches so you're knitting upwards and downwards at the same time.  That's 288 stitches.  It's also a much simpler cast on than even the backwards loop method, so I can't complain too much.  I knit about 100 stitches of the first row, then realize that the needles feel a bit...thin. 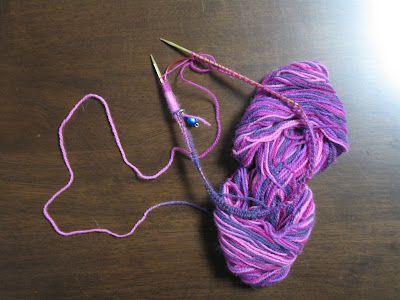 This is odd, because I was just knitting on my Secret of the Stole 3, Estes Park, to finish up the clue I was on before putting it away until Christmas gifts (and the last couple of test/sample knits on my plate) were done.  That is knit using the same size needles, US4/3.5mm.  I go to the WIP basket, where the stole has been exiled, and feel the needles.  Yup, definitely on the order of three sizes too large.

What the heck, I only just bought the stupid needles recently for the express purpose of knitting these cowls since my interchangeables are not so good at the Mobius setup.  Did I order the wrong set?  Checking my last Loopy Ewe order, nooo, I did not.  Crap, they must have given me the wrong needles!

I begin an e-mail letting them know I just found this out and was planning to place an order soon anyway, and then realize that the package for the US1s I was knitting with had a price tag on them.  A price tag that was not what I'd paid for the Addis from the Loopy Ewe.  Hmmm...did I maybe sometime buy another pair?  Definitely possible...not too probable, but possible...

I rooted around in my craft closet and lo and behold, another package of Addi Lace Turbos.  Size US4.  That's right, bonehead, you bought a set of US1s in Delaware because that's the smallest size the Addis came in and you wanted to try them with the cobweb weight cashmere you still haven't used.  That's why the package looked a bit less than crisp.  Moron.  You even swatched with them before.

Rip and redo!  Bonehead.
Posted by AnaMarie at 10:02 AM No comments: