I said I'd keep August as a month for WIPs only, and not start anything new until September. Well, over 2/3 of the way through August and I still haven't cast on anything new! I have bought some yarn, going whenever I have a coupon for Michael's or Jo-Ann's to slowly get the yarn I need for slippers and Christmas/etc. presents. I do have some yarn already on hand that will go to those things, but of course, not enough stash of the specific kinds I need to do what I want to do. You'd think I'd have all kinds of yarn for all kinds of purposes, but while I have managed to get yarn for a baby blanket and accessories from what I've got, I still don't have the right types/amounts/colors of yarn for other things. Sigh.

When the cats were not doing this: 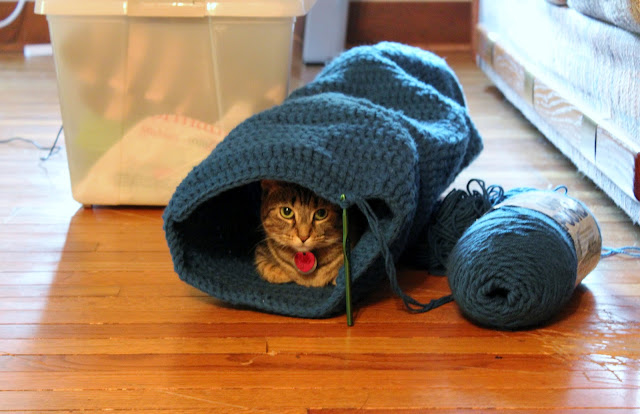 I managed to finish the tunnel. They both love it, which is good because it took three (three!) skeins of Caron One Pound to finish, and quite a bit of time. Crocheting triple stranded cheap acrylic around something that grew to nearly 3' long is really not that fast or easy! However, it is done, and now they can attack each other and their mice and fish in it all day long, while I can work on other WIPs. 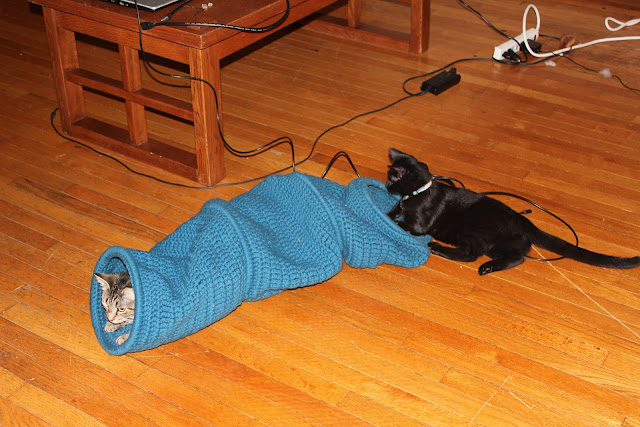 There's no hope of finishing ALL the unfinished projects I've got lying around, but I'm trying to at least finish all the ones I've started this calendar year. I just need to do a 3" seam on 8 box bags by hand and wash/finish some handspun to meet that goal. I should probably go do that!

Posted by AnaMarie at 7:35 AM No comments:

I keep a couple of bags of odds and ends. I don't save all the bits and bobs of yarn, like some people do, but I'll keep anything that's longer than a foot. Most of them are in my Ravelry stash pages, but there are some bits that never made it for one reason or another, whether they were always in the scrap bag or given to me by friends or what-have-you. I used a bunch of scraps from a friend's Jayne hat to crochet and felt a school of fish: 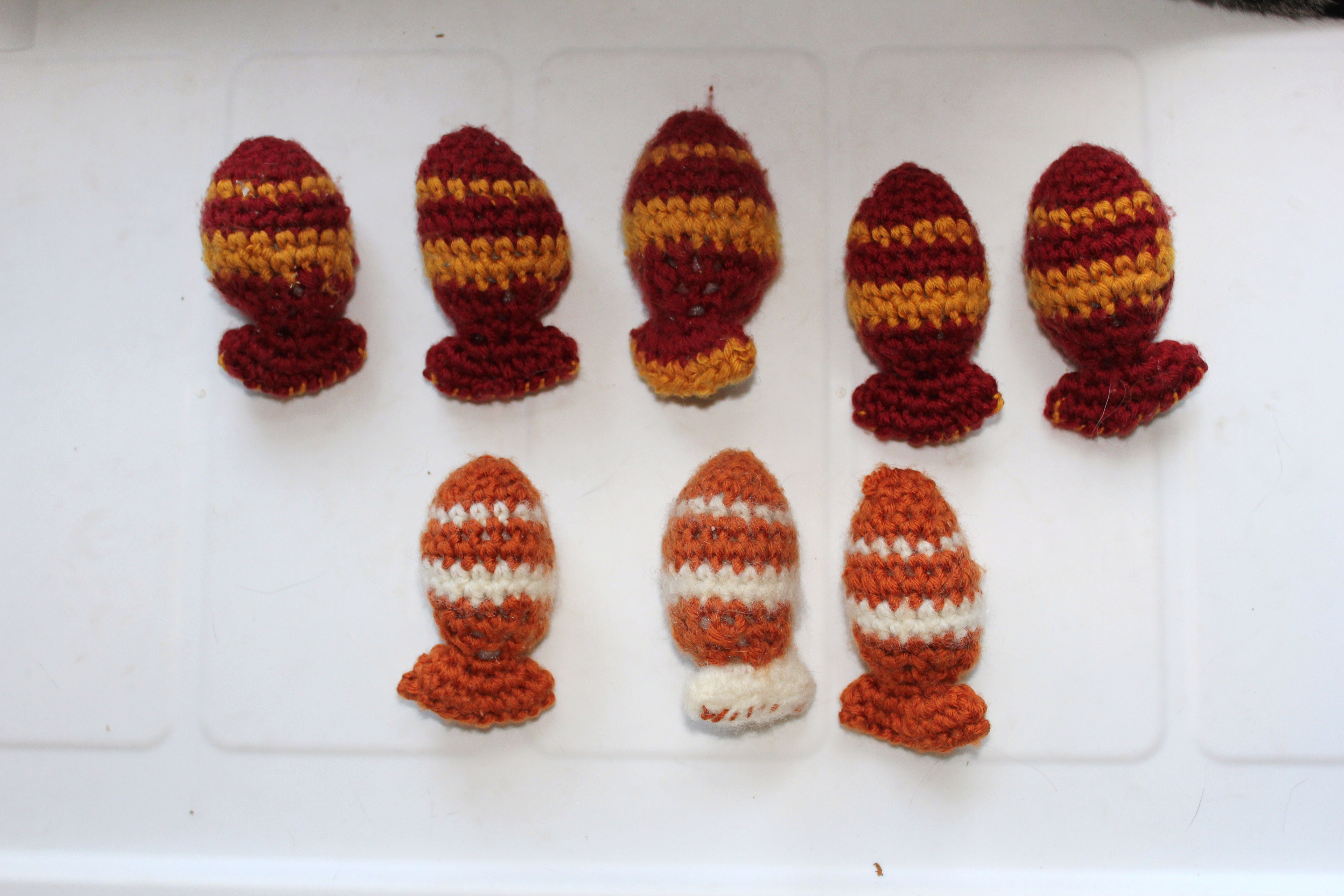 
I also knitted and felted a bunch of mice in various worsted weight yarns held double with some Fun Fur I had in the pile: 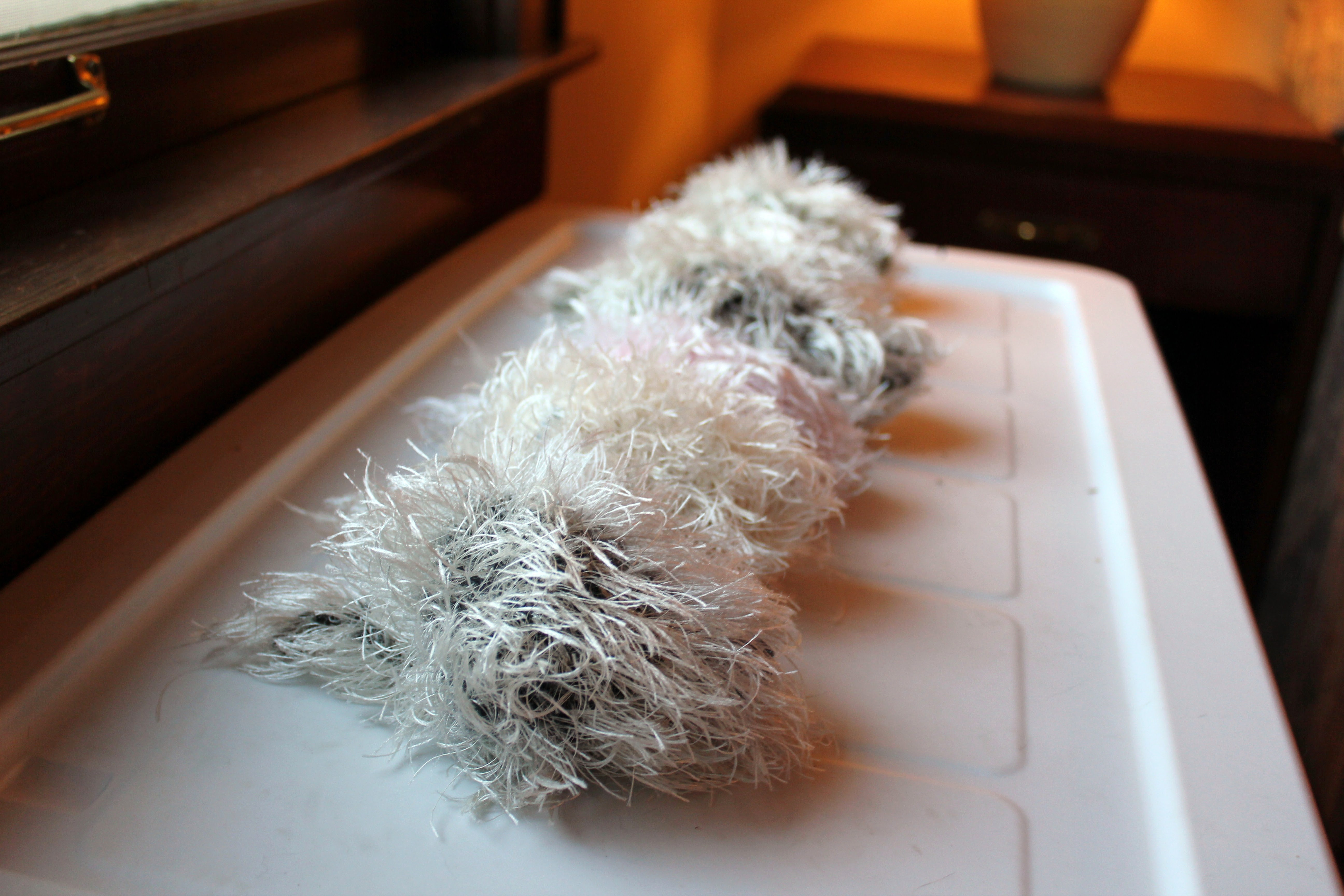 These are adorable, fuzzy little mice with knitted-on tails so they're secure for the cats. Good size too, nice and hefty. Pattern: Better Catnip Mouse (Ravelry)
Yarn: Patons Classic and other wool scraps, Lion Brand Fun Fur
Needles: US8/5.0mm
Timeframe: June 19 - July 28, 2012, though most of that time was spent waiting for me to felt and then stuff them.
Mods: None.
Problems: None really, though the instructions should read "work until square" or something along those lines rather than saying gauge doesn't matter and giving a number of rows.
Posted by AnaMarie at 11:08 AM No comments:

I ended up driving about 15 more hours than anticipated, and got minimal done otherwise, so I did not manage to finish any other projects. I did knit about 268 yards on Frill and about 500 on the blanket, along with the 100 or so on the Illusion piece. None of them are much different than the last post, photo-wise, so nothing really to see here. Have a mischievous kitten: 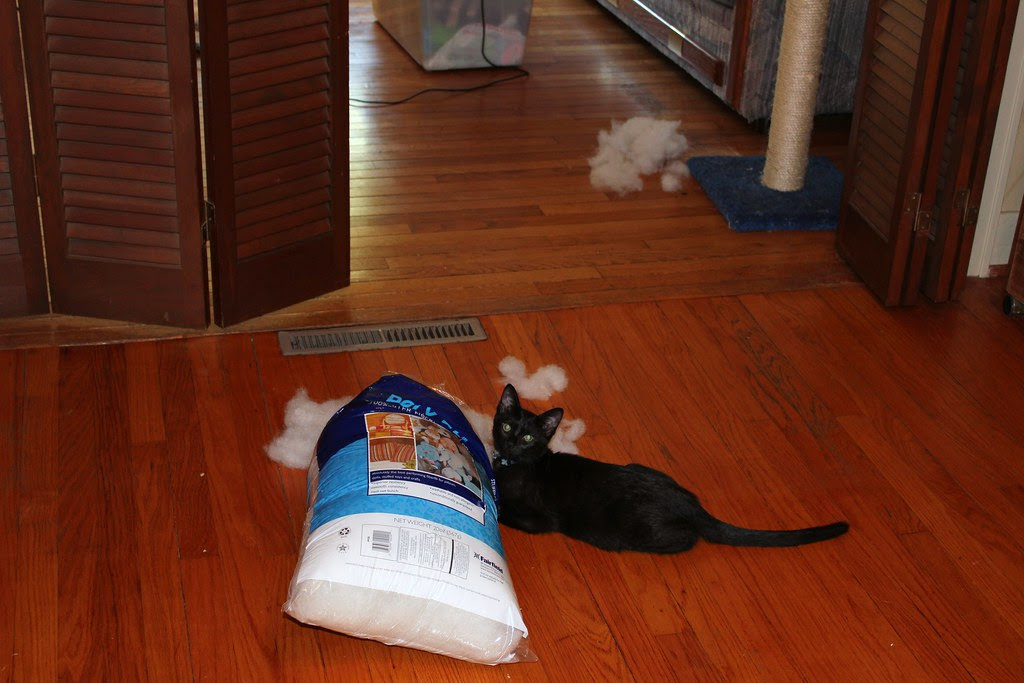 We're a bit more than halfway through the Olympics, which means the Ravellenic Games are also over the halfway point. I've worked on four of the five things I set aside for the Games, finishing one so far: 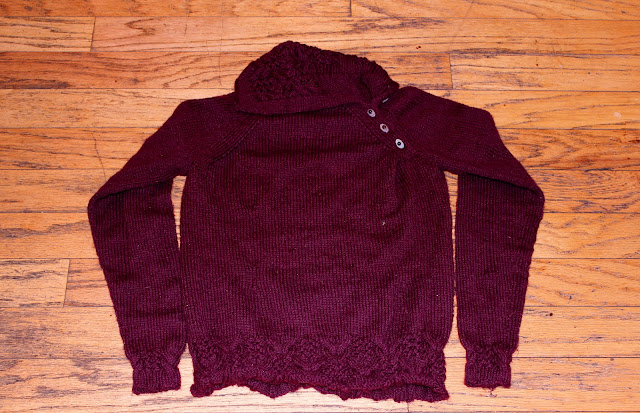 It didn't need too much work, so I finished and photographed it quickly before heading to visit family. It almost didn't get finished due to some more "help" from my kitten: 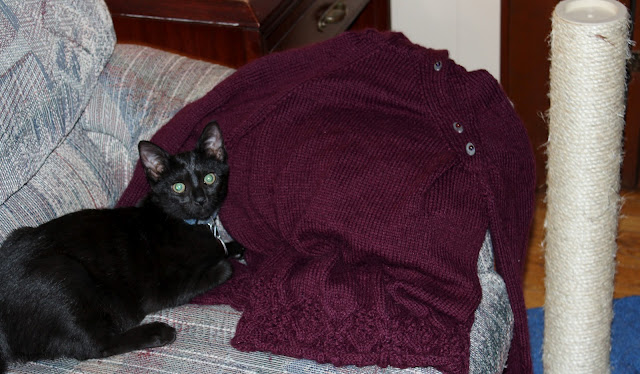 She just doesn't believe things I make are not, in fact, for her.

I think I'll finish two more, but it's not impossible that I'll just end up getting all five of them to the 80% point and not finishing any. My travel project, Variation on a Frill, is likely to be finished: 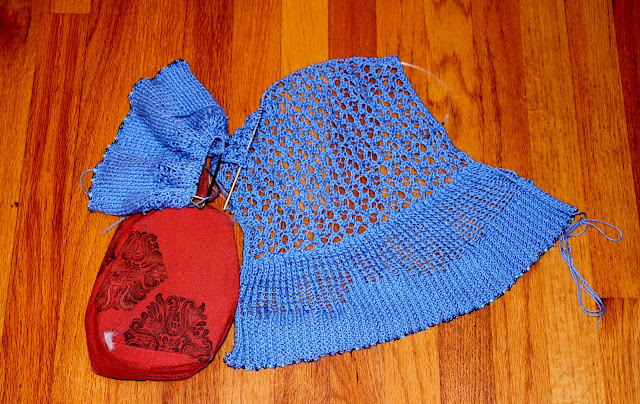 I've finished the second frill and almost 20% (22 of 120 repeats) of the center lace section. It should be done fairly soon. I'll be casting on the second Les Rideaux once it's done, though I don't think I'll finish that one.

Thirdly, I worked on my Broomstick Lace blanket while Lee drove, finishing the second panel in good time: 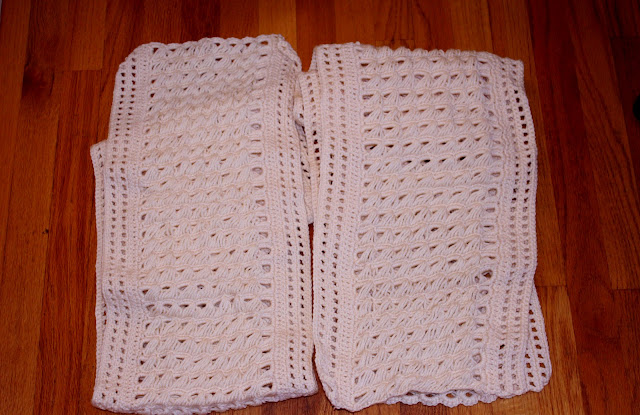 I hope the gauge is close enough!

One more panel to go, then seaming the three together,  a row of edging on either side, and a bunch of fringe on the top and bottom. I'm not looking forward to the fringe and honestly, I think I'll finish the blanket body in time but I may wind up missing the deadline due to the fringe. Must not let that happen!

Finally, I took a break between blanket panels to get the main section of my Marilyn Illusion to the 50% point, finishing the yellow yarn: 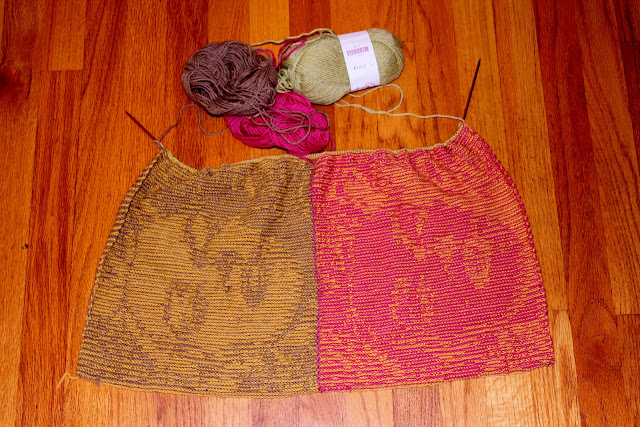 This one is unlikely to be done in time. These illusion pieces take a lot more time than they'd seem, being just knits and purls!

So that's the update. One down, two that will probably follow, and another two that probably won't get done during the Games. I plan to keep them in the rotation during the rest of August, along with the last 1/3 of the cat tunnel and the Mickey and the Fireman cross stitch that is getting close, so hopefully they'll be done this month.
Posted by AnaMarie at 5:30 PM 1 comment:


...it went up. I'm still missing a mile of yarn somewhere, somehow. Most confusing.

Michael's kept giving me 40% off coupons, as did Jo-Ann fabrics, and the kitties need beds and things, and any extra acrylic can be used to make blankets for the shelter, and I got some yarn as a gift, and...yeah. Yarn fail. I've been good at finishing recently though, finished 14 cat toys and a few other things, and I'm using Ravelympics and the Harry Potter House Cup fall term to focus on WIPs. They're offering a WIP OWL as a limited beta run this fall, and I'm really hoping to be in the chosen group! Maybe I can get a few half-finished things all finished. So I can start more things.

Sisyphus, you say? I have absolutely no idea how that relates...
Posted by AnaMarie at 8:16 AM No comments: