I finished this one once before. It was a test knit, and I just didn't quite like the way the top turned out. The shoulders liked to slide off, and it was quite cleavage-baring. So, I ripp 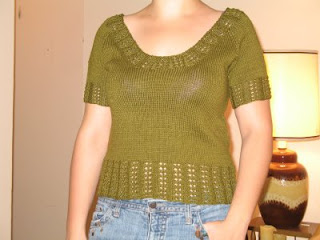 ed it back to where the neckline began, brought that up two inches which in turn brought the shoulders in, since I was starting the decreases later. It's now quite lovely, and I've worn it a few times, but only managed to photograph it when we went to Boston to pick up our visas. I love many of the design elements, but as it's a cute cotton top, if I were to re-do it, I'd probably add another inch to the body stockinette section and also put in some waist shaping. That's the one thing I don't like about it. When I've been sitting or lounging about for a bit (in the car for over an hour going to Boston) the midsection stretches and looks huge. A bit of decreasing for the waist would alleviate that. It's very comfortable and I LOVE the lace rib portions at the hem, arms, and neckline. 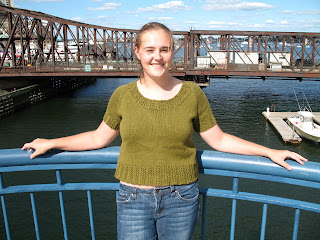 See what I mean about the waist bit? It makes me look a bit larger than I am. Looks fine in the earlier picture, and had I been thinking about it I probably could have tugged it into a bit of a better fit, but there it is.

Pattern: Lace Rib Raglan (Rav) from Gardiner Yarn Works
Yarn: Jaeger Aqua in Olive
Timeframe: Nearly a year in the making, I started this in October 2007, finished it for the first time October 14, 2007 (or at least that's when I took a picture of it blocking!), but finished it for the second time July 9, 2008.
Mods: See above!
Problems: Again with the see above!

And now for some artsy shots of my favorite bits of this pullover: 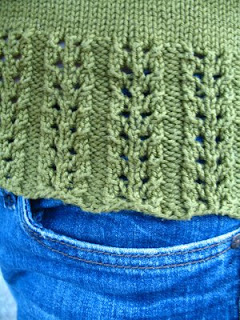 The pocket shot, showing the lovely edging and my pocket. 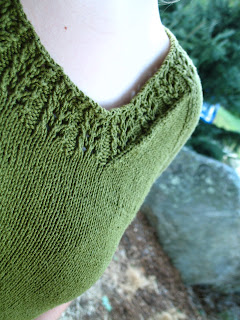 The neckline shot, showing, ummm...art? And a cool rock in the background. 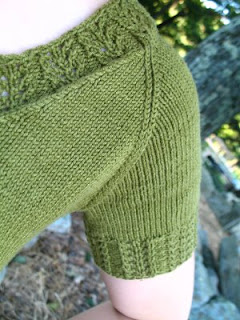 The shoulder shot, showing the way cool raglan seam, the lace rib detailing at the shoulder and arm, and some rocks and a tree.
Tres cool, no?
Posted by AnaMarie at 12:28 PM No comments:

I finally finished my BYOB. Here she is: 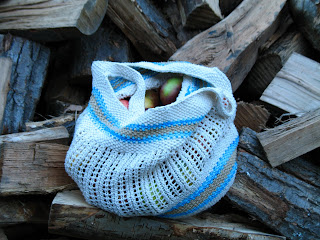 Pattern: BYOB
Yarn: Bernat Naturals Cotton - 3 colors and I'm not sure how much. Less than one 400 g skein of white and brown, less than one 100 g skein of blue (tidepool, I think)
Timeframe: July 9 - September 7. This one took awhile!
Mods: None
Problems: The pattern has a small typo in it - it says to start the bag body at the center of the cast-on row. It's supposed to be start at the center of one of the sides, to make the handles line up correctly. Luckily, I was watching the BYOB KAL on Ravelry and knew about this one, so knit a bit extra on the last body row to line up my handles the way I wanted them to be.

I love this bag. I intend to make more of them. I don't particularly like knitting this bag though, so the others will have to wait! 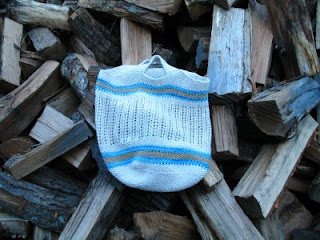 All that seed stitch and the cotton yarn is just not terribly pleasing to me. I should have enough yarn for four bags, one more like the one I just made and two with the brown as the main color. I have a 400 g skein in each color. It might not quite be enough though, since I'm using the main color as an accent color in the other bags. I might need another 100 g skein of each to actually get all four done.
I was working on sketching out and designing a bag almost exactly like this one. It was going to have a garter stitch bottom, stockinette for a few inches, an open lacework panel, then stockinette and handles similar to this one. The short row handles and rolled edge are ever so much better than mine was going to be, and the seed stitch a lot sturdier. I was going to add a pocket, but that really wouldn't work with the bulk of th 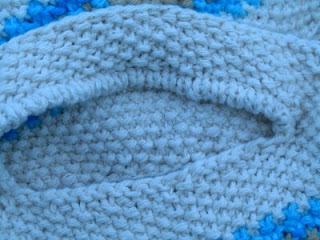 e cotton yarn, which I would have learned for myself later. 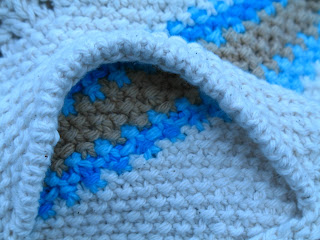 rows to make it flow out of the bag but make it look nice instead of just slashes in the top solid portion, the rolled bits to make it nicer on your hands, it all works so well together. I am so very impressed by this bag! Especially since the designer found such awesome ways of putting everything together and making all those little aspects of the design I was wondering about work so well. Thank you, Moira Ravenscroft, for such an awesome bag!
Posted by AnaMarie at 11:41 AM No comments:

I will show off two of my lovely recent(ish) FOs clogging up the sidebar. Man, I've either got to take pictures of these stupid things more quickly or change the rule that I cannot take the finished items off of the sidebar until there's pictures of them. I think I'll just try to take more pictures! 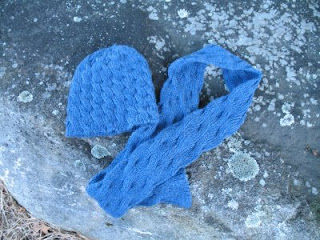 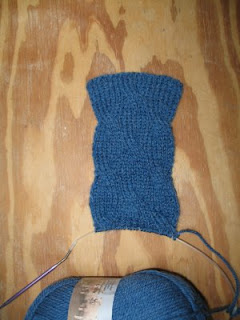 Yarn: Patons Classic Wool in New Denim, about 0.85 skeins
Timeframe: July 23 - 30.
Mods: Taken from StickChick on Ravelry
Problems: Not a problem so much, but it grew a LOT during blocking and flattened out amazingly, as I'm trying to show with the old picture on the side there. You might not really be able to tell, but trust me, it's much flatter and longer after blocking! Also the length had something to do with the yards of knitting after this picture was taken.
FO #2: Manitou Passage Hat
Pattern: Manitou Passage Hat from djinniya on Ravelry 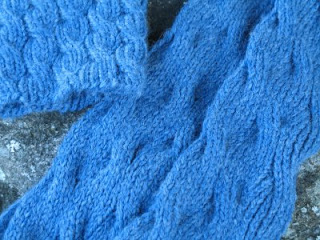 Yarn: Patons Classic Wool in New Denim , about 0.85 skeins
Timeframe: Just a few hours of knitting - started on the 1st, finished knitting on the 3rd, finally blocked on the 6th.
Mods: None
Problems: Only thing is it didn't quite block as flattened as the scarf did, so it doesn't match quite as well as the original set. Not that big a deal though!

These are a thank-you gift for the friend of my mother in law who helped to arrange the flowers for our wedding. She wanted a nice denim-y blue scarf she could wear with her blue jacket. I'm thinking this about fits the bill! It's also very nice because it's reversible, so she can just throw it on and not worry about having the right side out or anything.
Also, I have more pictures but Blogger is not being nice about allowing me to integrate. Check out http://www.flickr.com/photos/shlaci/ or my Ravelry account for more. Stupid Blogger. Figured it out. It wasn't Blogger, it was Chrome. Stupid beta Google product that doesn't actually work with Google products...
Also, to wrap up old news:
Posted by AnaMarie at 7:50 PM No comments: