Typically, this means you have only the sleeves left on a sweater, and it's taking forever because, well, sleeves are just long and painful. They have about as many stitches as 1/2 the body or more sometimes, and you have to make two of them. Two! You're usually already done emotionally with the sweater, and just want to put the stupid thing on already, so why are you still knitting?

For me, right now, this means that I have the sleeves from two sweaters done. But nothing else. I've knit both sleeves for the Telemark ski sweater, and they match perfectly, so I'm quite pleased about that. I've also knit both sleeves for my Mother In Law's cardigan, and blocked them both, as I really don't have enough blocking surfaces to block all of the pieces at the same time. Raglan pieces are huge.

I did the sleeves first because they are more like swatches, and if I was dead wrong for some reason or other, I wouldn't have knit quite as far before realizing and ripping it all out wouldn't be as painful. For the Telemark cardigan, I figured I should finish the second sleeve ASAP so it matched the first as closely as possible. I didn't want my gauge changing between sleeves, so doing them one right after the other seemed the best route. I should be continuing on with the body for consistent gauge throughout, but I've jumped projects a few times in between. 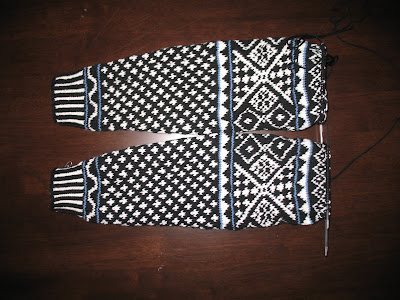 For the MIL cardigan, I'm making this up as I go based on desired dimensions and a picture of a sweater that is pretty nice. I'm really hoping that it turns out well. I took the dimensions before moving to Japan, and won't be able to re-measure/see her try it on until the summer of 2010. I'm worried the sleeves are long, but I knit them to the desired length. I'm just worried that the join between the underarm and body will be lower than anticipated, and therefore make the arm length even longer, resulting in gorilla arms. I'm doing the calculations and it just worries me that it won't turn out, mostly because I've never knit something this fitted completely from scratch before. 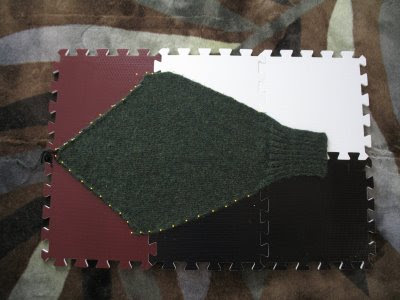 The sleeves were the easiest to calculate, so I started with them first. That and I wanted to be sure my gauge swatch wasn't lying to me. I was going to knit one sleeve first, then the body pieces, then the other sleeve, so that the sleeves didn't bore me, but then realized it would be better to just get the second one done in case I didn't write down some crucial bit of instructions and therefore had two completely different arms. As you can see, my blocking surface is a bit small, so I pinned one to the front of the board, sliding the pins in sideways so they lie flat along the foam instead of pushing straight through, and one on the back, for double the blocking area. I allowed it to dry leaning up against the wall, and then put it into the closet, knit a sock and worked on some other things. 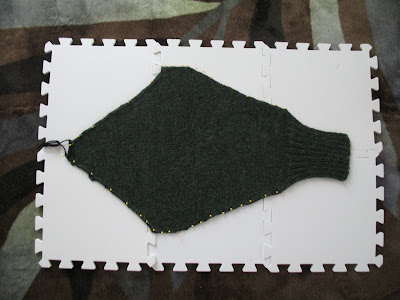 As of this writing, am blocking the back and about to start the front pieces. I think I may do these two at a time, so that I mirror them correctly. It would be very much like me to make two rights, or two lefts, especially as my list of instructions says to mirror pieces instead of spelling out what to mirror. However, I'm not bothering to wind the hanks into balls, so maybe two hanks going at a time won't be the easiest thing to do. Or, the back took just over one, so maybe I could just use both ends of one...? No, that's definitely a tangle waiting to happen!
Posted by AnaMarie at 12:30 AM No comments:

I have made a couple more Ikebana arrangements, and I will now show them to you! I know you are as excited as I am! 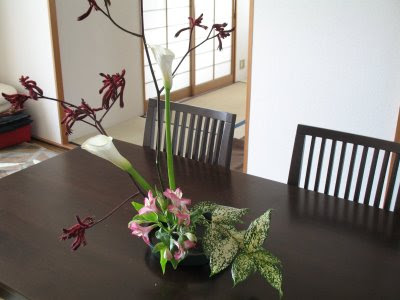 This was my second arrangement. It has Calla Lilies and Kangaroo Ears Paws (thanks MildlyCrafty!). There's also some cute pink flowers and a branch with some leaves on it, but I don't remember the names of those. The teacher showed me what to do for the main branches, but I placed the Calla Lilies and leafy branch myself, and she said it was good. Yay! 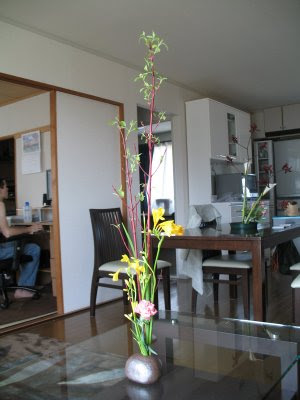 Because the Freesias and one Carnation weren't done yet, and the branches were growing leaves, I rearranged those pieces of the first arrangement into a new arrangement. I only had the one kenzan, so couldn't have two at once. This is my unofficial but still very much pleasing to me arrangement. 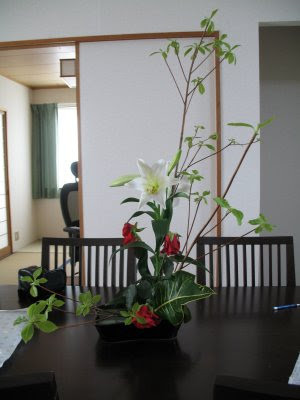 For this arrangement, the flowers were not quite in sync with the 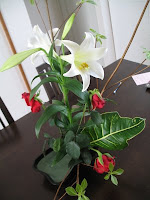 blooming, so it was not as pretty as it could have been at any one point in time. The roses were best the day or two after I got the flowers, and the lilies didn't bloom until 3 and 4 days after, when the roses were wilting. I liked this arrangement a lot, and just wish I had a more appropriate bowl. We make these at school using their supplies, then bring the flowers home and rearrange them in our own. I got three interesting bowls from the secondhand store for my arrangements. The only problem with them is that they're about 2/3 the size of the school's bowls, and in arranging Ikebana you tend to base the lengths of your flowers off the size of the container. I didn't want to re-cut everything after it looks so perfect the way it was, especially as the leaf would just be too big if everything else were smaller, so I left it even though it definitely overpowers the bowl.

I'm so glad I'm doing Ikebana. It's really cool to learn a beautiful flower arranging technique that I'll be able to use for the rest of my life, and it's nice to have the fresh flowers in the apartment on a weekly basis. Even Lee likes the flowers, and says they brighten the place up. Plus, I get a certificate for each year I complete, and the textbook is in English so I actually am learning the technical aspects and not just trying to piece together what I can from pictures and the other students.
Posted by AnaMarie at 5:58 AM 1 comment: 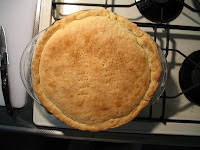 Yay! My first pie crust, for real! I made a Vietnamese curry chicken (Ca Ri Ga) pot pie for dinner, and boy was it delicious! This was my first pot pie, my second ever pie, and my first pie crust. It came out surprisingly well. I used the filling recipe from Wandering Chopsticks, after having tried the non-pie version of the curry and enjoying it greatly, and the crust recipe from the same. Lee was aghast - I was making pie crust and not using his family recipe? Sacrilege!

He agreed that the crust I used was perfect for this particular use though. 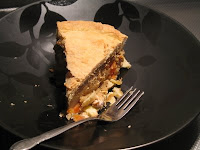 It is very rich and pastry-like, so excellent if you're looking for a thicker tart-like crust, but I think I'd still go with his family's recipe for most fruit pies. I used this recipe for a chocolate pie as well (no pictures, it went too quickly!) and wow, was it amazing. My family typically gets boxed pumpkin and chocolate pies for Thanksgiving - never again on my watch! This pie was so amazing, and actually really easy to make. I hadn't ever made my own pudding before, and it worked out so well. I shall have to make it again sometime and blog about it then. 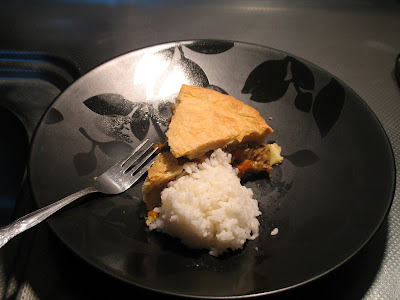 We made some rice to go with it, because as filling as the pie was, we wanted to have leftovers for the next night! Ca Ri Ga pie a la mode.
Posted by AnaMarie at 9:47 AM 1 comment:

I have just joined the Ikebana (Japanese flower arranging) club! Every 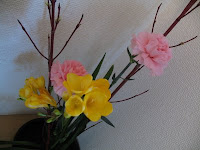 Wednesday, I will be getting new flowers to arrange, so we will have fresh flowers in the house weekly. It's a very good deal, and is a really cool skill to have, so I'm very excited about it. As I am a first year student, I get the first year student flowers, and have to arrange them in a very, very systematic way, which is good for me. Technically oriented flower arranging based on set angles, where each piece is some fraction of the next, based off of the size of the vase you're using? I can do that. This week, we had a couple of pink carnations, some yellow fresias, two branches, and a fern, very festive in a spring and Easter way. It's looking a little beat up at this point, from carrying it home and resetting it here after arranging it at school, but the flowers are more open: 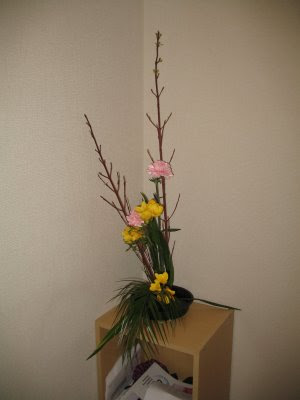 I'm inordinately proud of myself for this. I keep telling Lee to go look at the flowers, another one has bloomed, or another leaf has popped out on the branches, but he's not as awestruck by them. Arranging flowers is just one of those things that I tend to put in the "I can't do it" category because it's just too artistic and not structured enough - but I did it! I tend to put painting, drawing, calligraphy, sculpting, and quilting in this category. I will be trying calligraphy, I start that on Monday! I'm trying to continuously challenge myself, learning how to do things I never thought I could do on my own. What better places to learn the arts of calligraphy and flower arranging than in Japan? And it ain't half bad, if I do say so myself. 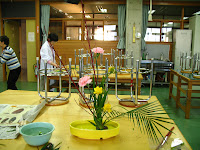 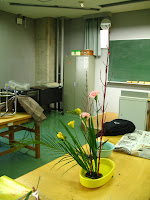 Posted by AnaMarie at 9:21 AM No comments: