I finished spinning and thread-plying all three batts I planned to for Tour de Fleece. Small, easily attainable goals for the win! 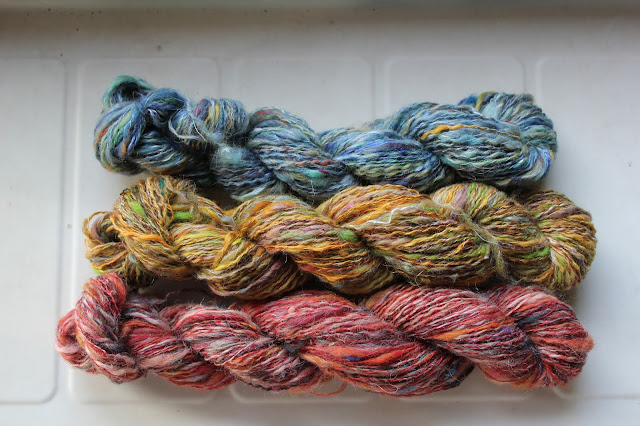 They're all fingering-ish weight, together enough for a shawl but my husband thinks the colors clash. I was thinking of a wrap, maybe with black to break up the colors. He recommends cowls, one with the red and blue, one with the yellow. Any ideas? 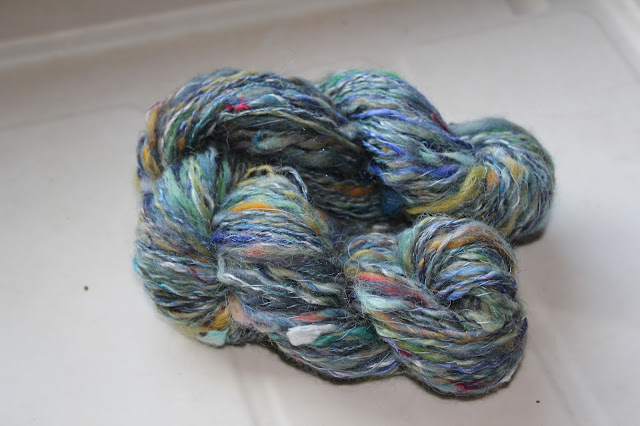 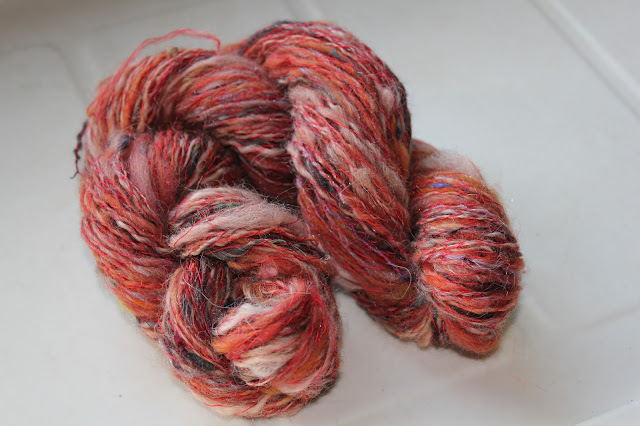 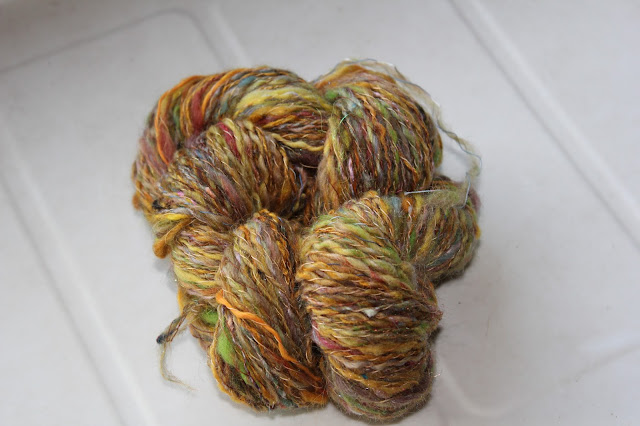 Chewie's done, and I wasn't quite right about there being no more cross stitches - there were a couple more to go! 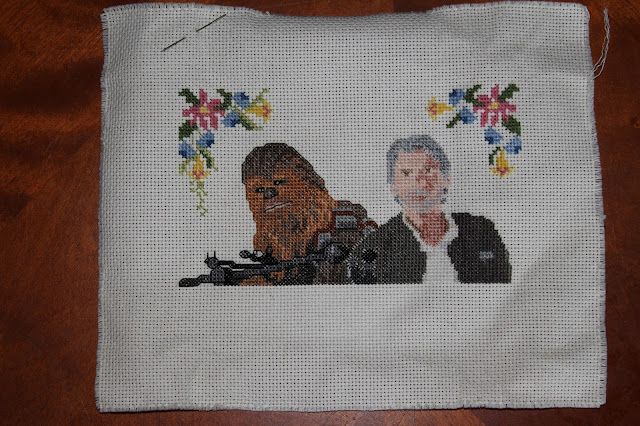 Getting so close I can taste it! I have some good friends who I think will appreciate the final project more than I, and have a good reason for giving them a gift of some sort in the near future. Hopefully the final product will be as excellent as it seems and perfect as a thank-you for them!

I seem to be in a new pair/second sock pattern for finishing off all those mateless socks waiting in the WIP pile. I finished the Shelves Upon Shelves pair (and have worn them a shocking amount, considering the fact that it's summer), then finished a pair of black Thelonious, and now I'm trying to finish the stranded socks before starting another new pair (so I can go back and finish Cauchy). Here's the black Thelonious: 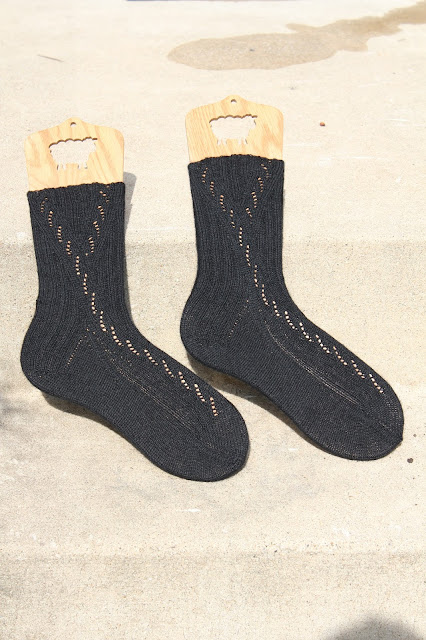 Pattern: Thelonious (Ravelry mine)
Yarn: Knit Picks Stroll (now Essential) in Black
Needles: US1.5/2.5mm
Timeframe: June 14 - July 15, 2015
Mods: I fudged where the motifs cross because I didn't end at the correct row on the cuff.
Problems: None, if I had read the pattern correctly the first time!
Posted by AnaMarie at 8:54 PM No comments:

I had a commission for a few pairs of hats and booties, so here they are! I may take a break from these two patterns for awhile - I've knit nearly ten pairs this year alone! 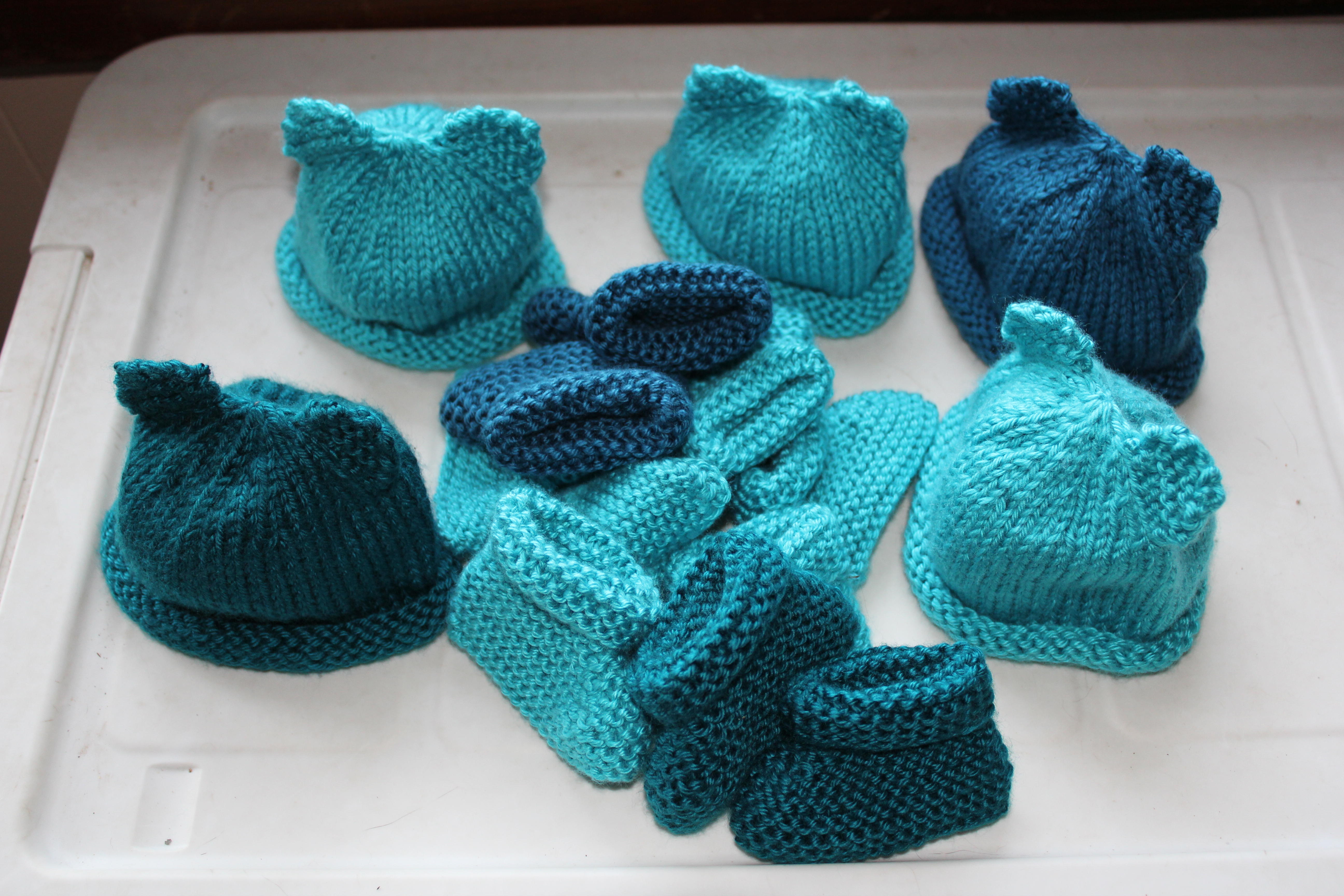 I'm pretty sure that the cross stitching is done so I've finished off all of the threads I kept live in the previous clues. Not all of the colors were used in subsequent clues, but enough were that I think it was a good idea. 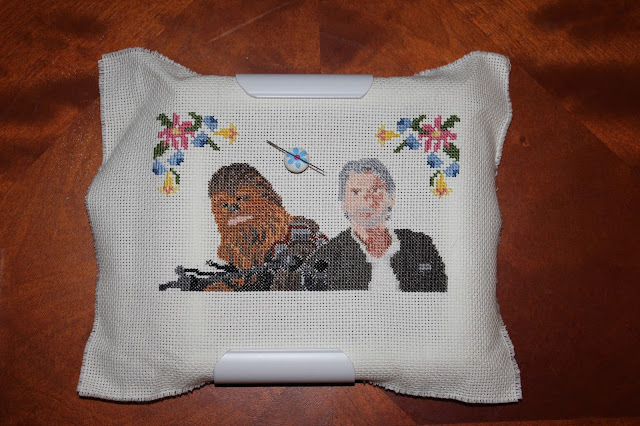 I'm not really participating this year, or at least, I am not planning to spin every day along with the Tour. Instead, my goal is to spin when I can (when I'm not out of town!) and finish the three art batts I bought last year. 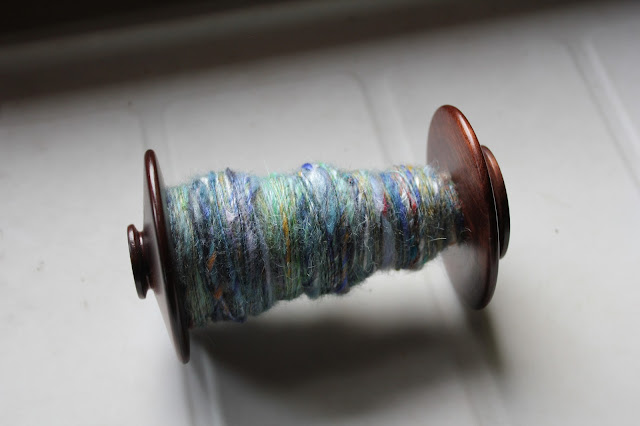 So far that's one batt down, two more to to go, then plying. I so got this.
Posted by AnaMarie at 2:23 PM No comments:

I've seen needle minders on a few projects around the internet and always thought they were cute. They're a magnetic doodad with a picture of some sort that you put on your cross stitch (with a second magnet on the back) and it magnetically holds your needle when you're not stitching. No need to find a spot on the outside to hold it, no worries about making extra-large holes in the work, and they can be adorable too! Yesterday I found out that they are pretty easy to make, and I already owned all the materials needed. Today I have four needle minders! 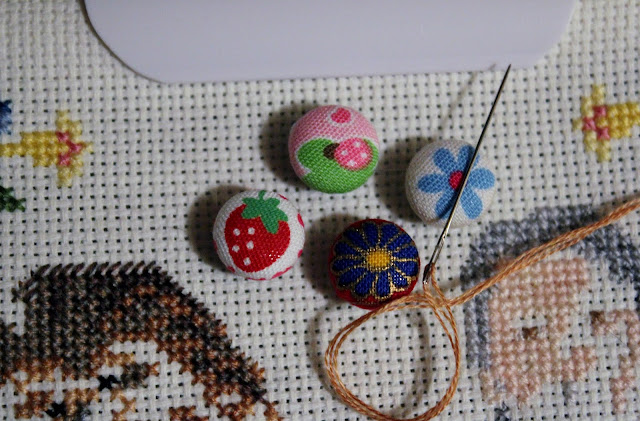 They're smaller than your typical needle minder, about 1/2" rather than 1". I had both sizes of buttons and magnets but wanted the smaller ones so they fit nicely on smaller projects. I did a "fling it around wildly" test and they don't have the gripping power that the larger magnets would, but I don't anticipate flinging around the project much unless it's in the Ziplock I store it in. Anybody else need some? I have more supplies and a few other motif options!
Posted by AnaMarie at 11:39 AM 1 comment:

This one was done a bit late, after Clue #5 came out. It also saw another three states; Tennessee, Ohio, and California: 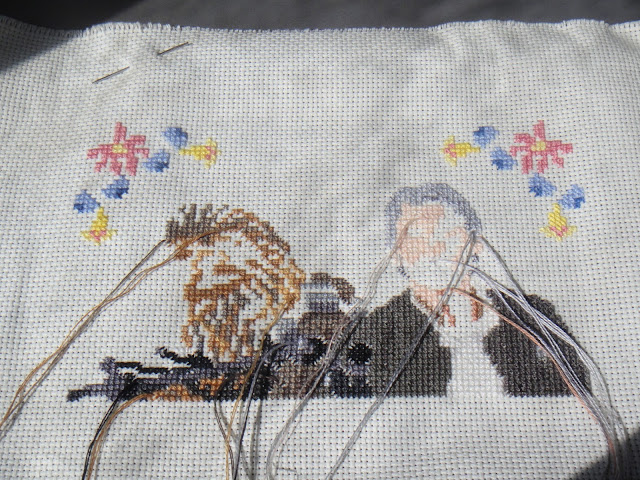 Halfway done, woo!
Posted by AnaMarie at 9:16 AM No comments:

I spent two very full days of a workshop re-knitting the cowl neck on my Obsidian. I got through an entire 437 yard skein of yarn. I was a bit disappointed by how the re-knit yarn turned out - apparently this yarn should really be re-skeined and washed, at least for the garter stitch sweater I'm making. I figured it would probably block out enough, and I'd just keep going. I was also getting a bit worried about how much yarn I was using - 1/3 of the yarn for the collar alone?! 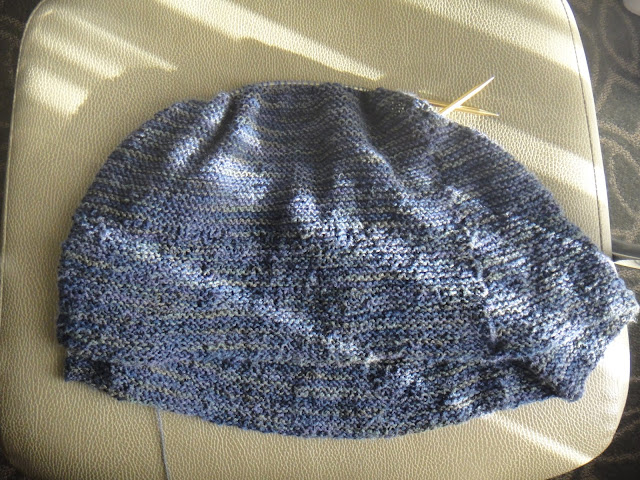 When doing the first decrease round, I realized my stitch count was off. In counting the stitches, I learned I added 120% more, not the recommended 20% more, to the cowl. Back to the frog pond. Again. At least I know to break out the niddy noddy and wash it this time - hopefully now that I've made all the mistakes, I can make the sweater!
Posted by AnaMarie at 9:31 PM No comments:

A friend of mine had a birthday recently, so I whipped up a quick pair of earrings. One seems a bit thinner than the other, but I doubt it'll be noticeable when worn. Luckily I had almost everything required and just had to pick up the earrings and gold thread. I love how well the beads went with it, and have no idea where I got them originally or why. They're clear beads with blue on the inside and gold flecks around it. Cool beads, and I still have most of a strand left. Earrings for me? 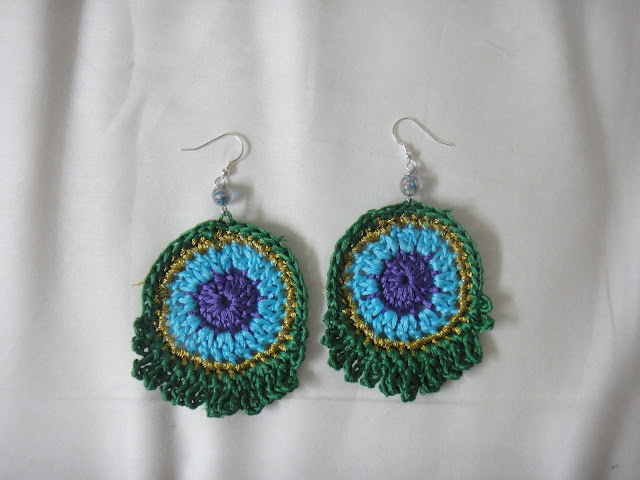 I was going to leave the mistake, but when I got to about the end of the cowl, I realized that while it would fit around my shoulders, if I decide to wear it like that, it's really, really stretched out. 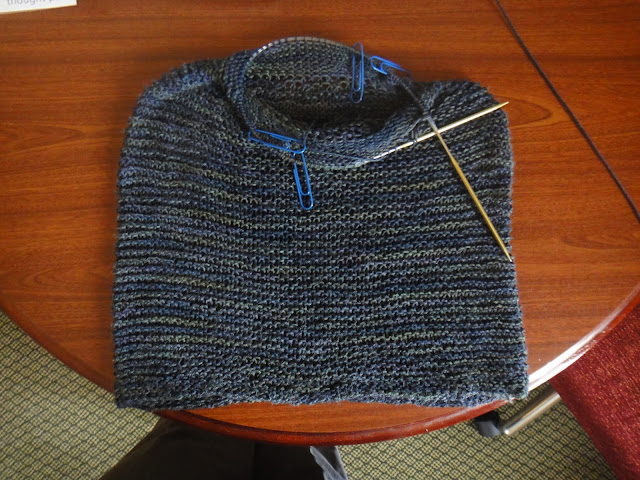 I kind of blocked it in the hotel bathroom (I'm traveling again, Tennessee this time) and I'm not happy with it. I think I'm going to increase it to 120 stitches and re-knit. I have to finish this sweater by the end of the month, so this is a bit of a major setback. I am not happy, but hopefully I'll enjoy the final product if I fix it now.
Posted by AnaMarie at 3:19 PM No comments:

This one was finished just before Clue #4 came out: 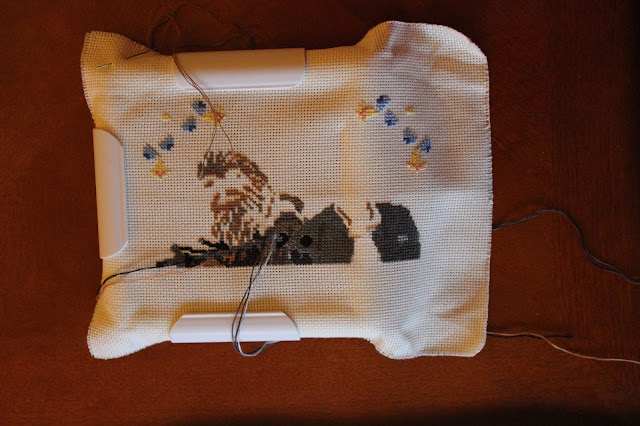 It's definitely taken from this image. Wonder what the saying will be?
Posted by AnaMarie at 4:40 PM 3 comments:

Knitting with the Stones

I started a new project at the Rolling Stones concert, an Obsidian pullover. It's all garter stitch and starts with a cowl neck so is pretty good for knitting in the dark or while paying attention to other things. 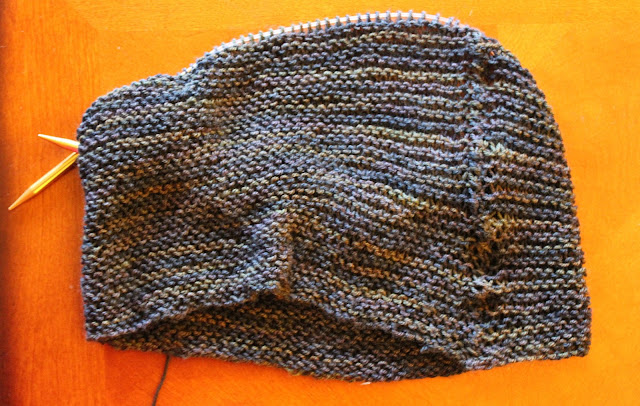 There is an interesting technique used for making it garter stitch in the round, and I managed to shift the beginning of the round over one stitch while knitting in the dark. I considered ripping back or trying to drop down to fix it, but I'll probably wear the sweater as a cowl neck most of the time, completely obscuring the seam, and I'm not entering it in any contests so no one is going to scrutinize it too closely. Typically I can't stand errors in my work, but I'm going to let this one go as a reminder of the concert.
Posted by AnaMarie at 4:33 PM No comments:

The June challenge for a Ravelry group I'm in was to learn a new skill. There aren't that many out there for me to try anymore (knitting ADD for the win?) so I decided to go with Portuguese knitting. I got sick and then poison ivy the last two weeks of June, so didn't get to it until July, but I still learned a new skill! The Denver level prize for the Loopy rewards club this year was a perfect fit, 35 yards of worsted weight yarn in a simple tube with alternating knit and ribbed rows. 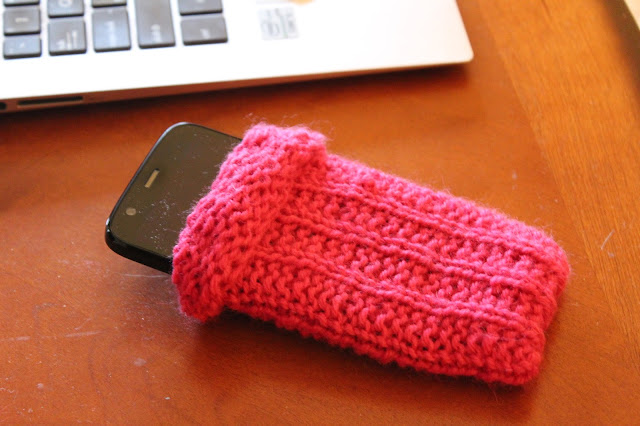 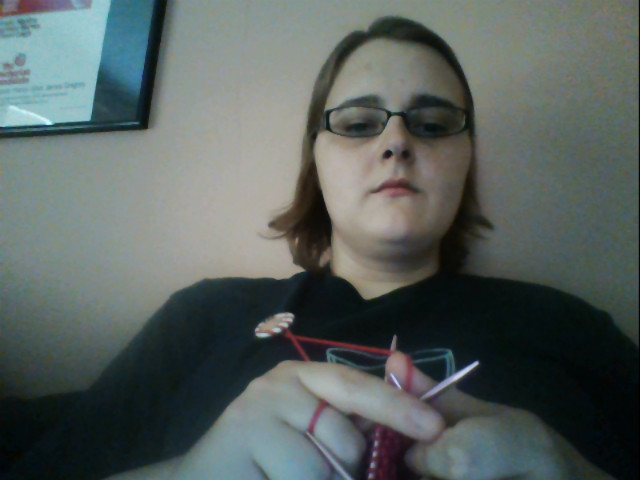 Some say Portuguese knitting is easier, but I use my thumbs to anchor and control my needles, so it took more effort for me and my tension was a bit loose. You run the yarn up to something that looks like a bent paperclip on your shirt (I used the Denver pin) and your thumb wraps the yarn around the needles. You tension the strand coming from the ball to the pin and knit with the strand going from the pin to the needles. I found I was not tensioning the yarn well - I usually use the same finger I knit with to also tension the yarn. Instead of allowing yarn to flow from the ball to the piece, I would find my hands creeping up toward the pin as I knit up the slack - not exactly what we're going for here! 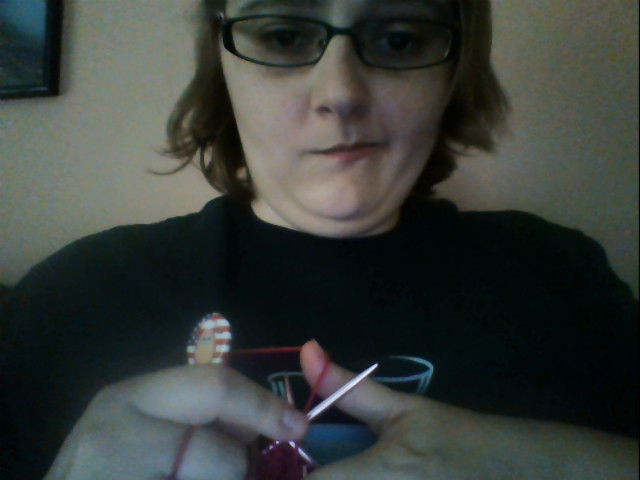 I tend to knit fairly fast, using my right pointer finger to flick the yarn around the needles in much the same way Portuguese knitting uses the left thumb, so I don't think I'd gain much speed by switching my style. Interesting technique, glad I tried it out, but I probably won't be using it in the future!
Posted by AnaMarie at 9:24 AM 1 comment: