The baby should be around shortly, and I think the package is with the mother. Maybe. I sent it late. Anyway, here are the gorgeous little bibs I made for my cousin's baby: 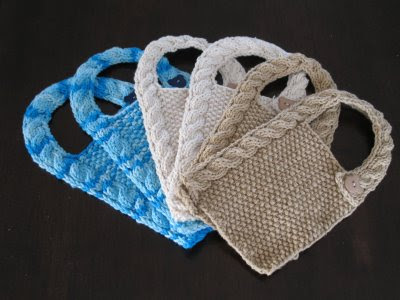 All of them were knit using the following:
Pattern: Modern Cabled Baby Bib
Yarn: Bernat Naturals Cotton - 3 colors, about .4 skeins per bib, in white, brown, and blue (tidepool, I think)
Timeframe: December 27 - January 25. Each one only took a couple of hours actual knitting time.
Mods: I slipped the first stitch of every row and used a crochet cast on to start for a more uniform edge.
Problems: None!

I loved these. Amazingly quick knit, add a cute button, and it's good to go. I'll probably make myself a million of these when I have kids (not anytime soon!). It's a nice interesting yet simple design, and of course, is made from machine washable cotton. Now I just hope I secured the buttons on tight enough!
Posted by AnaMarie at 12:17 AM No comments:

I am nearly down to single digits in projects. That's a big goal of mine - to get down to under 10 projects and keep it there. While I've nearly got it (about 2 more inches on a sock to go) I have a couple of test knits that will be started before I can finish anything else. Which means I will be back up to double digits.

Ah, decisions, decisions.
Posted by AnaMarie at 10:54 PM No comments:

Why I Hate Swatching

2 reasons - One is that most of the time, it's a waste. I don't make a whole lot of things that require sizing to be perfect. The few sweaters I make are better served starting the sleeve as the swatch. After all, by the time you've finished the swatch, you could be 1/4 of the way up a sleeve instead if you're right, and I've typically been right when I pick my yarn and needles. I also tend to knit a lot of socks, which don't require gauge, and other things like bags and blankets and wraps, which don't really require gauge either.

The other reason is that swatches lie, or I make the swatch perfectly but for some other reason it doesn't actually help with the making of the item. Take this swatch for example: 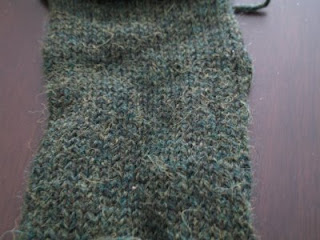 It's for my mother in law's cardigan. She wants a sexy, curve-skimming cardigan that can be worn with or without layers underneath. Something with, say 1/2" of ease and a ribbed mock-turtleneck type neck. Originally, when I was planning to finish it before coming to Japan, I swatched with three different needle sizes in the round, as I was going to knit it in the round and steek the front open to toss in the zipper. Now that I don't have the person who it's for here to try it on, I'm going to be knitting it in pieces and seaming it, so that if it doesn't fit for some reason, I can take it apart and fix it. You cannot fix a steeked sweater very easily, if at all. 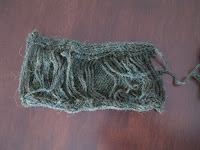 It's so sad. I even carried the yarn 'round the back to make it all knit the same way I would be knitting it, using much yarn in the process. I blocked it too! Knit and blocked and done the right way, only to be wrong. Oh well. I must make another. I am not using a pattern on this one, else I wouldn't bother, but I shall do it right this time, so help me Bob!
Posted by AnaMarie at 11:38 PM No comments: