In Japan, I bought a couple of small kits for various crafts. A couple of these kits were miniature beaded sandals that I wanted to turn into stitch markers. I made a pair and a half, and put the kit away. Recently, I went through my miscellaneous craft bin and pulled out a couple of the kits that might work for small monthly challenge prompts over on Ravelry. This month, the stitch markers fit the bill so I finished up the kit of five pairs. 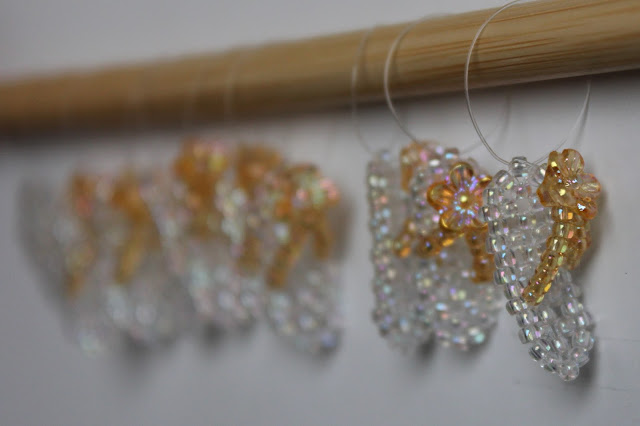 They're pretty cute, with a definite right and left sandal and a pretty flower on the top. Because the kits were so cute, I got more than one. I thought I got four kits, but have only found two. Next time I feel like pulling out the beads, there's a green set just like this one that needs to be assembled! I made the loops fairly large to fit most needles and also to dangle down and not get in the way of the stitches. I have no idea how effective they'll be as stitch markers, as I've never used anything so large (I typically use paperclips), but I'm excited to try them out!
Posted by AnaMarie at 9:22 PM No comments:

Survive. That is my goal.

Sub-goals: Graduate, get a job, sell the house, and knit enough to keep sane.
Posted by AnaMarie at 12:11 AM No comments:

I finished a lot of projects, but I worked on a bunch more that just didn't get done. I also decided last month that I should knit my committee members a thing for my dissertation, and got the yarn for that. It's not a small amount of yarn.

I used and/or sold 9.7 miles of yarn this year. I purchased 8.8. Right direction, but not as good as I was going for. I finished 145 things, nine of them from pre-2015, though I was aiming for 14 pre-2015 finishes.  I'm finishing the year with 30 unfinished projects, three more than last year, and twelve new ones. Two of them just need to be blocked, so won't take much once I'm home again. Maybe I can finish one or two of the projects I have with me on the flight home!
Posted by AnaMarie at 12:10 AM No comments: