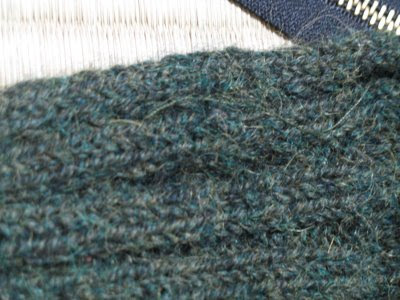 So there was a hole. I fixed it! I put the zipper in the long way, by hand, and it isn't the best stitching job ever. The stitches aren't straight, but you can only see that from the inside. Everything else looks great though! The zipper lines up well, the tubular bind off is wonderful, and I just hope that it fits the way it should! It's not my size, so while it didn't look so great on me, I'm hoping it's perfect for my mother in law. She says it's great, so I'm happy! 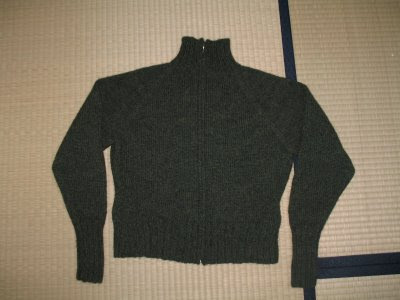 Pattern: None, calculated using multiple online and in print resources.
Yarn: Berocco Ultra Alpaca in 6277 (Heathered dark green with gold), 4.75 skeins, also a gold jacket zipper to match the gold accents in the yarn, as the green zippers were not quite dark enough to use.
Timeframe: Bought the yarn and swatched initially August of '08, re-swatched in February, I think, finally cast on March 27, finished May 12.
Mods: Well, some of my initial calculations were wrong, but since it was my pattern, I suppose there weren't any!
Problems: Kind of a lot. The hole from the last post was the biggest one, combined with getting the zipper in. I forgot to switch needles a lot. I don't typically do patterns with different size needles. I think I've only done three previously, a pair of socks, my wedding cape, and the Lopi Cardigan I made awhile ago. I had to rip back 2" of the ribbing on the back. I had to rip out all of the ribbing on one of the sleeves. I had to rip back to the ribbing on one of the fronts, which was finished when I realized it. Could have been done a week earlier had I not kept screwing up, and made it on time for Mother's Day. Seaming worked well, blocking worked well, and the only problem I had with my numbers was that I had to work 2 more rows on the fronts to make them as long as the sleeves. I changed a couple of the numbers on the fly, mostly the length of the ribbing in a couple of areas. I am going to call this one successful though! 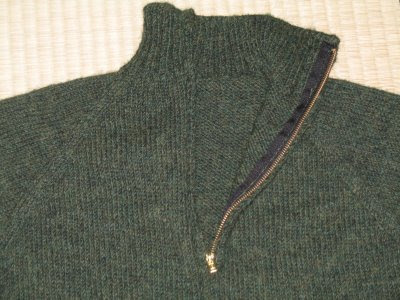 The sweater is out and done and the hole was fixed nicely. I shall post pictures of and discuss in my next entry. For now, more flowers! 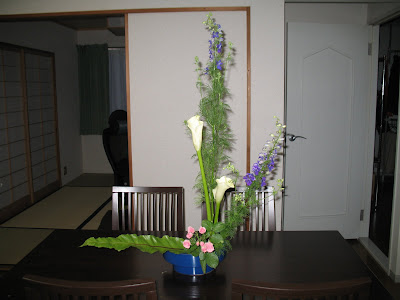 After having no fresh flowers for two weeks due to vacations (I'm not complaining!) there is a new arrangement livening up the room. It goes amazingly well with its bowl. I'm much happier with it now that it's here than I was when I made it at school. I've gotten roses from Ikebana a heck of a lot more than I've gotten roses from Lee. It doesn't bother him one bit. This arrangement has purple flowers, more Calla Lilies, and pretty pink roses. It also has a leaf. It is in the same style as the first few. We don't branch out into more interesting things for a bit, until we get the whole shin (tallest one, nearly straight up), soet (3/4 height of shin, off at a 45 degree angle), hikae (3/4 height of soet, the leaf, about 75 degrees from shin) formula down. Pretty flowers though! 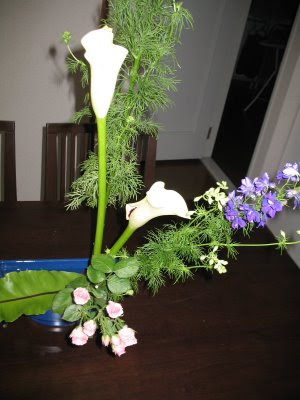 Posted by AnaMarie at 7:41 AM No comments:

So, as usual (damn, I need to break this habit) I have not finished the sweater I was trying to get finished on time. I'm good with test knitting deadlines, but not gift/at home deadlines. This however, is only part of the problem.

All I had to do was get the zipper in. When putting in zippers, I tend to hand sew them in to make them go in perfectly. Well, as this one was DK as opposed to the worsted weight sweaters I've done in the past, I wanted to get the thing done, so tried machine sewing it. I could not for the life of me get the zipper and sweater to stay straight. Maybe if I didn't put the foot of the machine down, it would not have pressed the sweater out so much, causing it to overshoot the zipper, but that doesn't matter now.

What does matter is that I screwed up putting the zipper in, so pulled out the trusty seam ripper. Figuring it would take a minute or two, as I have gotten very good with it during my couch slipcover project, I went at it. And promptly cut a hole in the sweater, making a sound that caused my husband to ask me if I sliced off a finger or punctured an artery, in his words. I told him it was worse. He didn't believe me until I showed him the hole. He agrees that it is worse, and would only have been worse if I had punctured an artery/cut off a finger in the process of creating the hole, thus rendering the sweater stained and/or me unable to complete it. 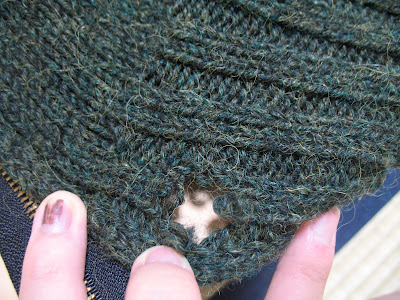 This is NOT GOOD. Now, I have an overdue sweater that needs to be fixed and have the zipper put back in, correctly this time. I will not give a sweater that has a zipper put in so badly that it's obviously homemade. I can do this. I know I can do this. The cut stitches are two purl stitches (from two separate rows) that divide the I-cord and the body of the sweater, so isn't in a highly noticeable spot, but will be somewhat difficult to fix due to the I-cord border and the fact that it is only a 4-stitch I-cord from the end. I have five options.
1: Rip out all of the ribbing up to the hole, knit back down those couple of inches. No thanks.
2: Pull out the four ends a bit, weave those in, double knit over the opening like darning a sock and weave those ends in. Probably not.
3: Only pull out a stitch or two, felt the cut ends together and darn over the smaller hole. Probably.
4: Pull out the strand of yarn that makes up the end of one cut row and the beginning of the other, felt the other two ends and re-knit one row, seam up the next. Also probably not.
5: Cry. Knit a small patch, needle felt it in, hope no one notices. Nope, as I'd have to buy more needle felting stuff because I left mine in the States. Not a bad option though if I were to make sure to solidly felt the cut ends.

I'm planning to go with Option 3, but that really depends on how many stitches I have to pull out to get the ends long enough to fix them. I wish I had a felting needle, as it would be so much easier to needle the small ends of the yarn together instead of trying to pull out enough to weave in or wet felt. I'll be trying to wet felt only the ends, not any of the rest of the sweater, and keep it small enough that it's not pulling weirdly and can be easily hidden. I'll probably pull the ends, making the neighboring stitches tighter to felt them, and use a crochet hook or other implement to loosen the stitches back up, pulling the felted ends tighter in, and double knit over a stitch or two to make it look better when fixing.

The sweater is currently waiting for me to be awake and level headed enough to go back and fix it. This will be tonight, and it WILL be out in the mail tomorrow, come hell or high water!
Posted by AnaMarie at 1:45 AM No comments:

Apparently, I just can't finish a pair of socks. I've had the Hourglass Socks on the needles since November 4. I did technically finish them once, after making a stupid error with the heel flap. Then, I did a test knit sock (Nebula by Cookie A., the brown one) which I LOVE, but I didn't have to make both, so I'm leaving the second one as a gift to myself, once I finish the Hourglass pair. Now, I have a sample knit pair of socks to make, so the Hourglass socks have gone back onto the stitch holder they just came off of, and will be waiting for this pair to finish. 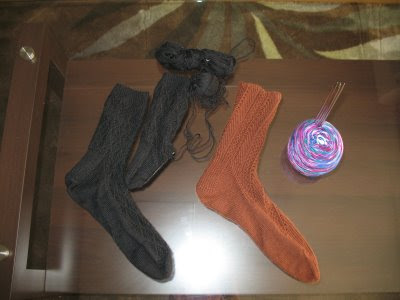 I'll be knitting an as-yet undetermined pair of socks to showcase the yarn, Super Sock by Abstract Fiber. I'll update the colorway when I show off pictures of the in progress socks. I also have a pair of socks I just can't seem to get right, the Snowflake socks I'm trying to make. I keep on knitting them, then realizing they just aren't working the way I thought they would, and ripping back. I will, as soon as I start the sample socks, have four pairs of socks on the needles. That is three too many. There should always be a pair of socks on the needles in the purse for waiting in lines and such things, but this is just too many. I blame the complexity of the patterns. The Snowflake ones just don't turn out well. The Hourglass ones have an easy to memorize pattern, but have cabling nearly every other row every four-ish stitches, so take awhile. The Nebula socks also have cabling every other row, but not nearly as much and those look so awesome I just want to finish them and wear them everywhere NOW!

As for the sample knits, I have it narrowed down to three possible patterns that show off variegated yarns well, one of which has cables. I think it might show the yarn off the best, which is why it's on the list, but I don't want to knit more socks with cables! The other two are nice, easy to memorize lace patterns, so I'm leaning towards those, but am giving the final say to the designer as she'll be keeping the samples when they're done being samples. I may as well make socks she'd like to wear later, especially if she ever discontinues the colorway!
Posted by AnaMarie at 5:21 AM No comments:

I'm trying to get the MIL sweater to my mother in law for Mother's Day. That was a realistic goal. However, I've been having issues.

I don't typically knit things that require you to switch needle sizes. Therefore, I am not paying as much attention as I should be to switch the needles. First, I forgot to switch to the smaller needles for the back of the sweater. No big deal, I was only 1.5 inches in, rip and re-do. However, I have just finished the left front, and I remembered to change for the small needles to start. I just did not remember to switch them after the ribbing.

You'd think that I'd learn to stop when I think "that's strange" or "hmmm, it wasn't like this before..."

Apparently not.
Posted by AnaMarie at 7:39 AM No comments: