The kitten seems to think that everything I make is either something for her to sleep on or play with. Or both. She's not too far off, the only project that I've worked on at home that hasn't been cat-related has been one of my Art of Disney cross stitches. Which she sleeps on if I put it down where she can get to it.

The good thing is, I know she absolutely loves what I'm making for her. The bad thing is I'm not sure I'll ever manage to finish this darn cat tunnel, at least, not while she's trying to help: 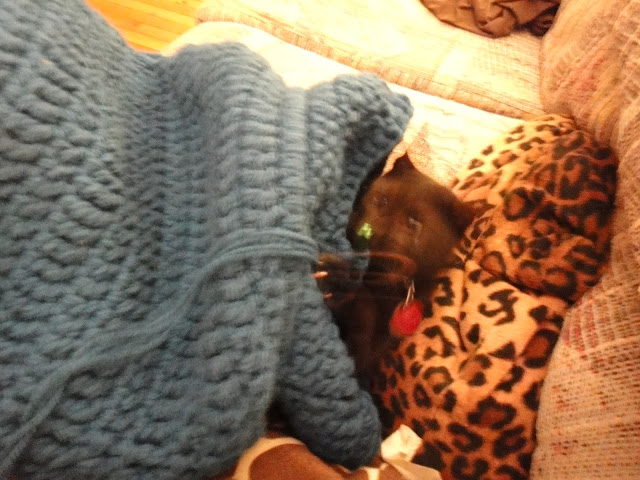 Blurry picture, but I think it does an excellent job of showing off her helping skills. She keeps popping up in it while I'm trying to work and attacking the hook and working yarn - not exactly conducive to finishing the tunnel!

Since 2008, Ravelry has done the Ravelympics (name now changed to Ravellenics due to copyright), where you watch the Olympics, set yourself a crafting challenge, and then try to win the gold by completing your personal challenge in whatever category it may fit into. I tried in 2010, but set myself a crazy challenge that I would in no way be able to complete. This year, I'm going to be much more low-key about it, but still play along. I'm going to do strictly WIP Wrestling, and more specifically, I'll be working on finishing Evendium, to give myself a quick, easy win, and then I'll be working on a (second) broomstick lace afghan and a (second) Frill, both unearthed from being packed away while I was in Japan. I'll probably use Frill as my carry-along project, but if it becomes un-carryable or if I finish it (hah!), I'll start working on Les Rideaux (Curtains!), the smallest and therefore most likely to be finished sock in my WIP pile as my carry-around project. Riding the bus to and from work has given me a nice daily time to knit, so a purse project at all times is a must! For something to count in WIP Wrestling, it must be something that's been stagnating since at least May 14th, and that's pretty much all of my projects at this point, except for the Christmas 2011 socks and some cat toys that should be done before it starts. If I get bored or antsy, I can switch to any (Ravelry-approved) project I've already started, so I should have absolutely no problem grabbing something to work on. Finishing things, however, is another story entirely! 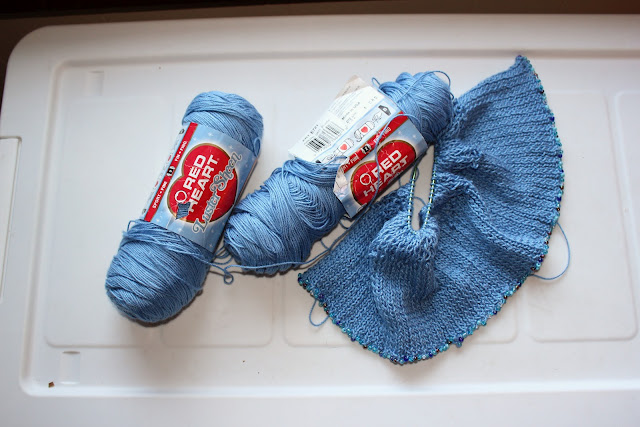 One frill done, so I'll start with the other frill (the most time-consuming part) and then the center, rather than continuing the center from this frill. It'll make the finishing seem faster!

Starting point for the afghan: 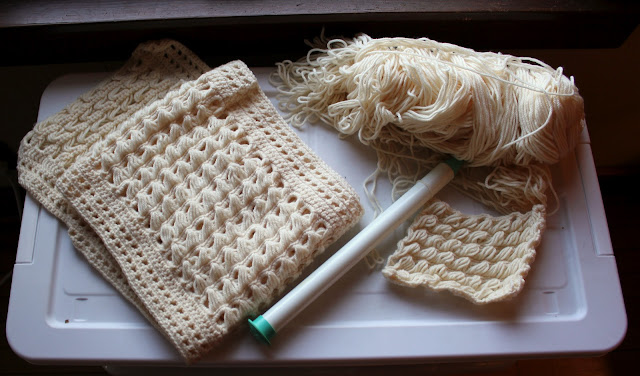 One panel plus edging done, a second barely started, and there is more than enough yarn for the third; I have two fresh skeins of Caron One Pound! 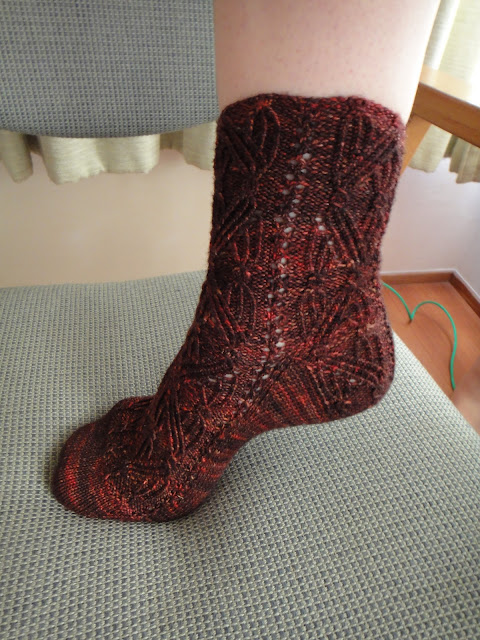 One fully completed sock, waiting for its mate. This picture doesn't quite do the pattern justice, it really is stunning!

I'm fairly certain I won't need to find additional projects to work on, but if I do, I've certainly got 'em! Just take a look at the sidebar...
Posted by AnaMarie at 8:07 AM No comments:

Since I've been off-Trail, the plan was to tackle some long-unfinished WIPs/UFOs. I finished the stitching on one of the Christmas ornament cross stitches I've been working on forever, and moved my attention to the next Art of Disney piece, Mickey and the Fireman. I'd been moving along nicely on that one, until of course I got to Lafayette and unpacked all of my yarn. All of a sudden, there were Things that NEEDED to be made. Like covers for the Swiffer that was left behind in the house: 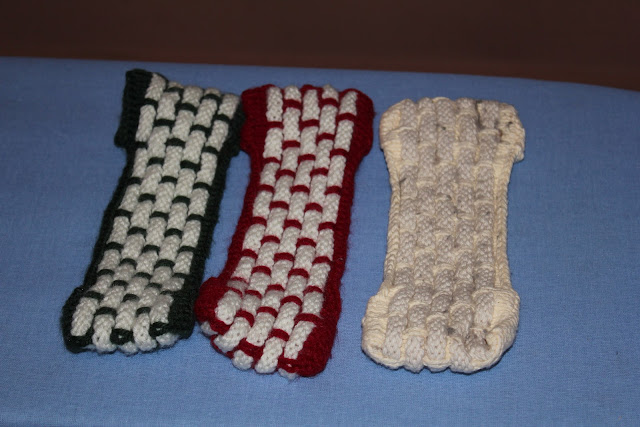 Three covers in all, two made of acrylic for sweeping up cat hair and dirt, and one of cotton for wet jobs

Pattern: Ballband Dishcloth Reusable Swiffer Cover (Ravelry)
Yarn: Red Heart Super Saver (red and green), Sayelle Natura (OLD yarn, white-ish), and the third one is two colors of kitchen cotton, natural and cream.
Needles: US7/4.5mm
Timeframe: June 4-5, 5-8,and 8-17, 2012
Mods: None.
Problems: None really, though it pulls in a bit much so a larger needle or another row of the pattern would have been good. They work well as they are, so no complaints!

Beds for the cats were also a necessity, and getting rid of all the crazy amounts of acrylic was fairly high on the list too: 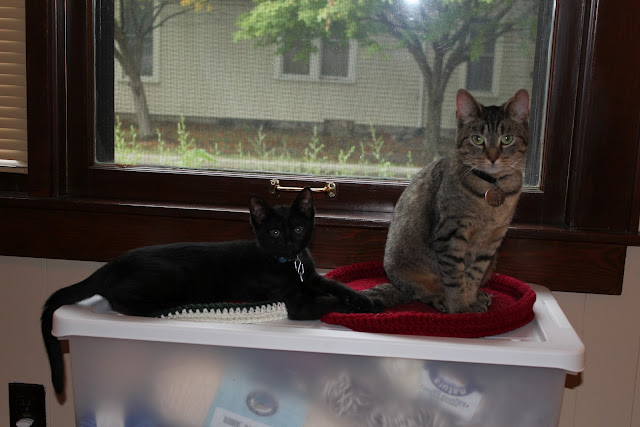 The first two beds fit Layla when she's curled up tight, but really aren't the ideal size. They're fairly quick to make, and two layers so they're nice and comfortable for the cats. They really like them, and I should make more but I've only got off-white colored stash at the moment and I think that's probably not the color I should use for a cat bed - it'll show hairs and dirt too easily! Of course, I'm also making lots of cat toys. The kitten is rambunctious and loves the little birds but not the balls with bells, so more stuffed cat toys would be welcome. The current almost-finished army of mice needs another trip through the laundry to felt better; they went through once, but I'm not quite happy with them yet.
Next I'll work on those other projects, the 26 things that need finishing. Two of which just need buttons, eight of which just need a simple seam, and those Christmas ornaments just need loops so they can be hung, backing so they look prettier and are more stable, and then I need to cut them out. Looks like for Ravelympics Ravellenics, I'll be focusing on some WIP Wrestling, finishing at least two of the knit/crochet projects that are clogging up my WIP bags.
Posted by AnaMarie at 3:16 PM No comments:

I'm not participating in the Tour de Fleece. I missed the first three days of spinning, so I am not officially participating. However, it is the motivation for me pulling out the wheel and going through some stash. I did end up bringing my wheel and fiber with me, it ended up packing down nicely. So far, I've got a very full bobbin of the first color I pulled out, Mahogany Crush, and I'm wondering what to do with the rest. I decided to chain-ply the first bobbin, since I like chain-plying, it's the majority of that color, and my spinning is not yet even enough to ply nicely even if it was exactly half. 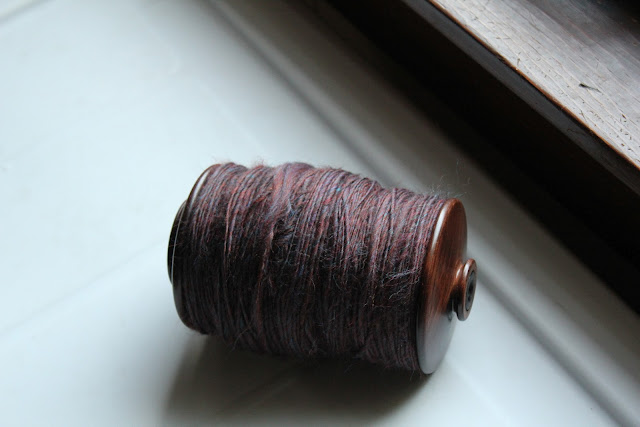 Now the question is, what do I do with the other 23.7 grams of this roving. I'm leaning towards pulling out another color that will probably ply nicely with it and taking the same amount of roving to spin and ply in a 2-ply. Maybe even to use with the 3-ply in some kind of shawl or something. Depends on the final weight of the yarn. Maybe a cute little cardigan of some sort.

Today's goal: plying the first skein and finishing it. Maybe when I know how much it is, I can have a better idea of what I want to do with the rest!
Posted by AnaMarie at 7:10 PM No comments:

This month, I bought no yarn and worked up a few quick and easy projects that helped my yarn count. See:

For some reason, it says I knit 1.5 miles. I did not. According to the officially logged projects in Ravelry, I knit about 1/2 mile this month. Where is that other mile coming from? I have no idea. I assume some yarn that I have is now sold in 50 gram skeins or something, so the official Ravelry numbers have changed and therefore, even though I still have the much larger put-up, I would need to find precisely which yarn has changed in the Ravelry database and change my personal skein numbers to reflect how much yarn I actually have. Which is something I'll not be doing anytime soon. Eventually, I'm sure I'll find whichever skein of yarn is entered incorrectly and go back to fix the entries, but for today, I will pretend this reflects reality and revel in my new low personal record. And then knit some more because I need to buy yarn for more cat things and washcloths this month, and an increasing yarn count is wrong!
Posted by AnaMarie at 8:55 PM No comments:

I've knit quite a few pairs of my go-to sock pattern, Thuja, in the past few months. Six, in fact. Five of them were knit using the same yarn and needles, one was knit using Malabrigo Rios and different needles, and I think they all turned out nicely. Four of them were for my recommendation letter writers, one was for a friend going through a rough patch, and one was even (finally!) for me! The 23rd pair I've knit, I believe. 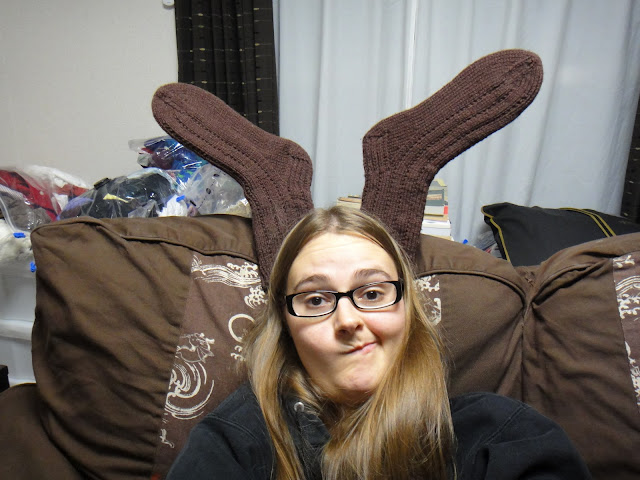 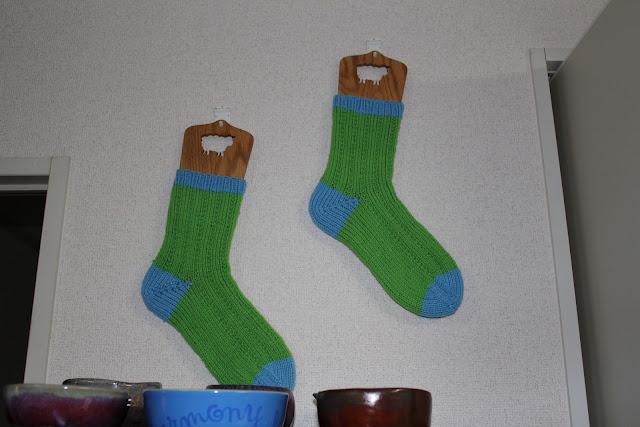 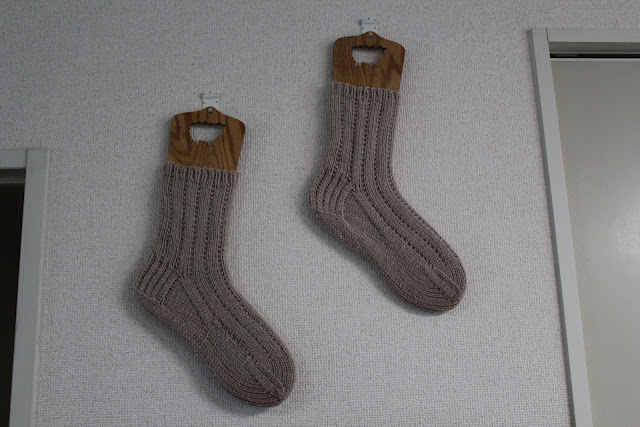 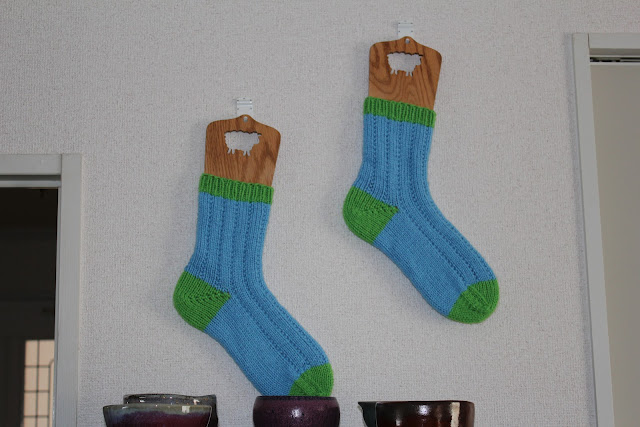 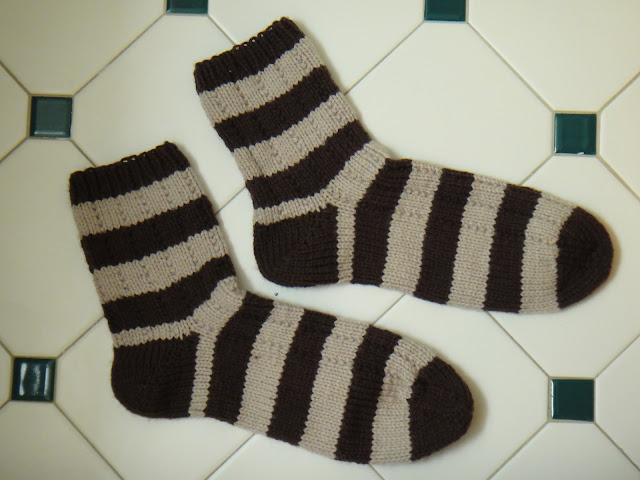 Pattern: Thuja from Knitty (Ravelry)
Yarn: All kinds of Pierrot Drifting Colors
Needles: US6/4.0mm
Timeframe: 10 - 18 days apiece.
Mods: None.
Problems: None. Love this pattern so, so, so much! 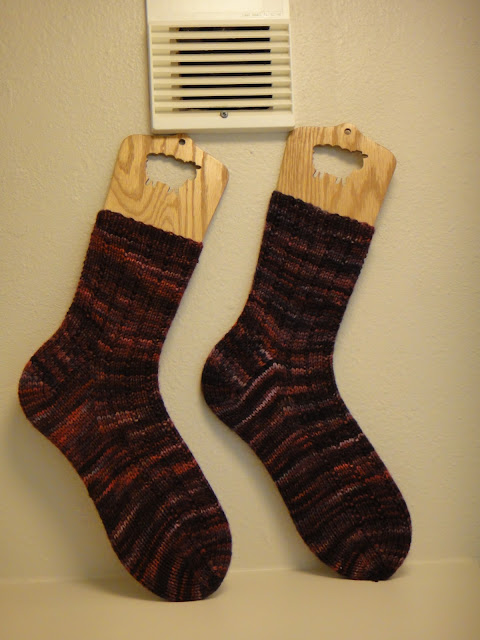 Pattern: Thuja from Knitty (Ravelry)
Yarn: Malabrigo Rios in Purpuras
Needles: US7/4.5mm
Timeframe: March 8 - March 30, 2012
Mods: 5.25" leg to make sure I had enough yarn
Problems: None, though I probably could have done the full 6" legs with the amount of yarn that was left.

The last ones are my soft, lovely Thujas, and they are more purple than they seem in the picture. So soft, so lovely, love them so much!
Posted by AnaMarie at 1:10 PM No comments: