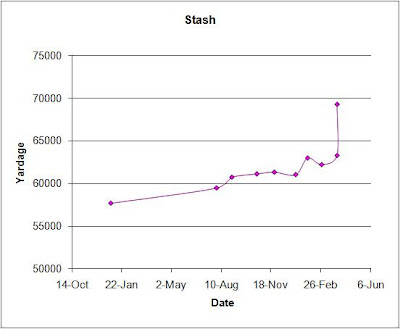 For this month, I changed the Y axis to give a better look at the data points.  For March, I have two data points, one right under the other.  The lower point is without the Knit Picks order of Christmas yarn.  The lower point does include the skeins of Cascade Heritage and Malabrigo Rios, though not the Patons Classic Wool from the US I got in addition to the Knit Picks order, which is why it's not lower than the prior data point.  Houston, we may have a problem.  39.4 miles of problem.  Lee says this is the saddest graph ever, since the desired trend is in fact opposite to what is going on here.  Spectacularly so for that last data point.  As long as it all gets knit up for Christmas, it won't be that bad.  Right.  Right?

I love these socks!  This is the first pair of shorter cuffed socks I've made, shorter due to yarn quantity in this case.  I'll probably make a pair of short-cuffed something else after I finish with Rhiannon, as there should be enough leftovers for a small pair.  Sadly, wearing these with my Danskos seems to give them some permanent black marks.  Only on the toe though, so not a major problem, but still, sad.  They also pill due to fiber content, but I knew that going in.  I still love them to bits! 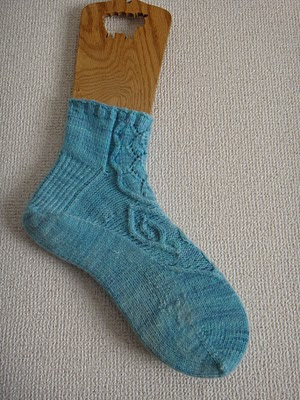 Pattern: Absinthe (Ravely)
Yarn: Abstract Fibre Sock Club, Cyrus base
Needles: US1.5/2.5mm
Timeframe: June 30, 2009 - February 28, 2011
Mods: Heel.  I started the gusset earlier due to my larger instep, after doin' it rong the first time.
Problems: Just the heel issue.  Stupid high instep.  Oh and I suppose the cuff problems, though I am glad with how it turned out. 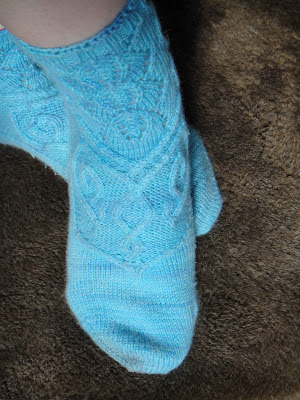 Socks!  Now to continue in my quest for a fully handknit sock drawer with Rhiannon.
Posted by AnaMarie at 2:55 AM No comments: