I blew this one. Three reasons.

1. I didn't open my wheel for a few days after the 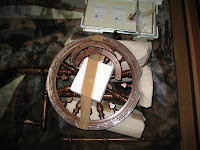 start, due to life and the couch slipcover that wouldn't cooperate. It finally did, and looks great, though could use some ironing.

3. On the Bali vacation, I decided to get SCUBA certified and surf, and maybe do some climbing or other activities. I have recurring knee issues, and the treadling of the wheel, while not causing major problems, was straining the knee a bit more than was recommended for physical activities, so after an initial few hours of excited treadling and then a bit of spinning, I decided not to tempt fate, and was kind of wishing I'd gone with the Mazurka so I could use just the good leg. 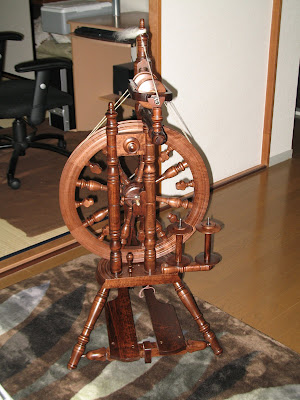 The wheel! Yay! I have a spinning wheel! A Kromski Minstrel from Copper Moose in Walnut!

Oh well, I did get the basics of my goal down, which was learn how my wheel works, though I didn't get any sort of consistency yet. The second half of that goal was to spin three bobbins worth of wool and then ply in a DK to WW type yarn, which would hopefully be enough for a vest for work, but that did not happen. I think I'll give my legs a few days to recu 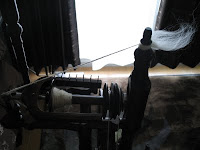 perate from the trip, then I'll be spinning and will hopefully (maybe, fingers crossed) have at least the yarn for a vest for work by this fall, if not the vest itself. I have two pounds of the yarn, so if three bobbins doesn't end up as enough, I can always spin up more. Then, I plan to play with dyeing and plying different colors together with the rest of the yarn. I also have some gorgeous dyed fiber from Copper Moose, but that will wait until I've gotten the hang of this wheel and finished the spinning for the vest.
Posted by AnaMarie at 3:25 AM 1 comment:

Letterboxing has interested me for awhile. I'd like to letterbox with my own stamps and geocache in every country I visit. At the stationery story the other day, I found inexpensive stamp making supplies and made me a stamp! 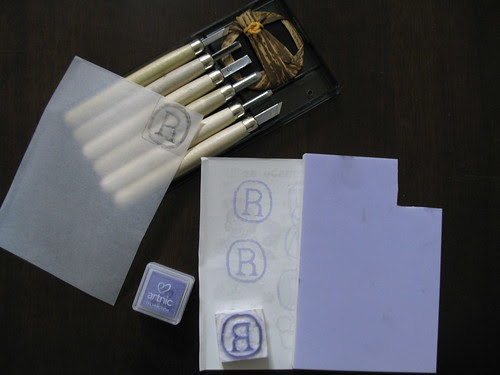 You trace whatever you'd like to make on the tracing paper and color it in nicely with a pencil. I freehanded a letter R in a circle, as R is my last initial. I didn't have anything specific in mind, I just wanted to try out my new supplies. I have a set of six carving implements, so I should be good to go if I really get into carving. If not, it was only $10 for the supplies, and the R and stamp pad have already been worth the expense.

It was pretty quick, only about 15 minutes from start to finish, and a lot of fun. I got a colored stamp blank, which makes it a lot easier to carve. You just carve away the colored surface until it's white where you don't want ink to show up. I got the purple ink because it matched the blank exactly. Lee likes it also, but says we need red to use it on correspondences he's a part of. Oh darn, I have to buy another ink pad? I'm glad he likes it enough to want to use it. 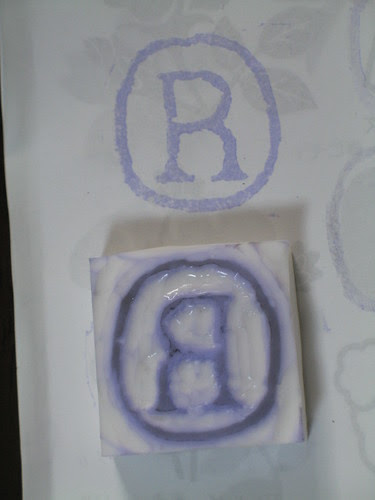 It's not perfect, with the odd edges and divot where the curve of the R rejoins the line, but it's pretty good. I'm very happy with it. It's obviously homemade, but is the rustic kind of homemade some people pay for. I'm not sure how much I'll be getting into stamp making. I want to make a letterboxing stamp for myself, and probably a nice kanji or two from my calligraphy class once I get something worth carving, and then I'd like to make some local letterboxes since there aren't any. I might also make an interesting one to stamp things I make for people, since I would like some sort of label for handmade gifts. I've toyed with the idea of embroidering a symbol on, but stamping might work also. A small symbol that I can carve and switch out colors depending on the yarn I'm using. That might work!
Posted by AnaMarie at 2:36 AM 1 comment: