I made a Neon Ski Bonnet. 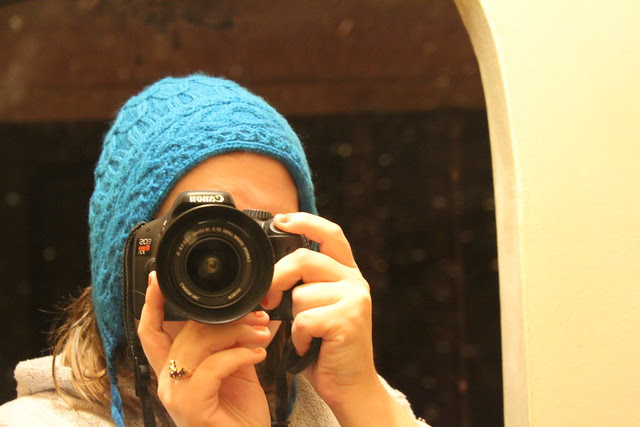 You can't really tell in this picture, but it's a bit small. Very close-fitting. This yarn grows when washed, it just didn't grow as much as I thought it would, so now I'm re-doing it to make it bigger. It's made in sections, so I pulled out the sections that are too small, then the front cabled band needs to be made longer. Of course, I can't just keep knitting. See that part right on the top in the middle? The cable directions change. To fix it, I dropped down half of the cable, laddered it back up, then did the other side. It was faster and easier than ripping it all back and re-knitting it. 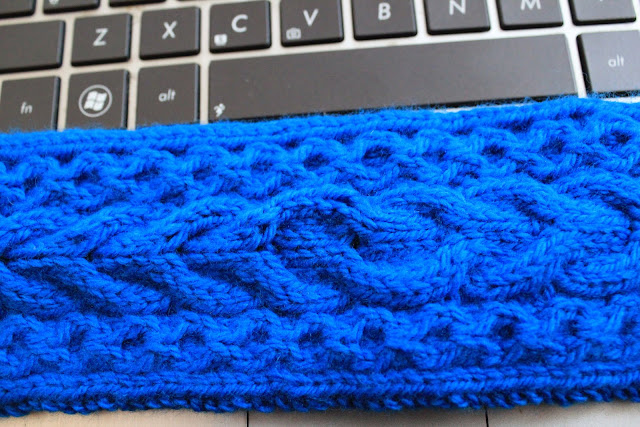 The first side went pretty quickly. I used two DPNs and a crochet hook one size smaller than the knitting needles (size USE/3.5mm) for fixing the stitches. First, I arranged the stitches at the cable cross the way they should be (crossed the cable). 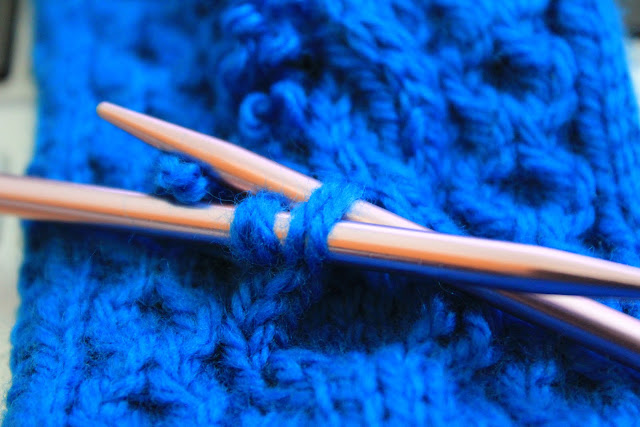 Next, I laddered each stitch up the six rows, putting them on the next DPN to get ready for the next cable crossing. 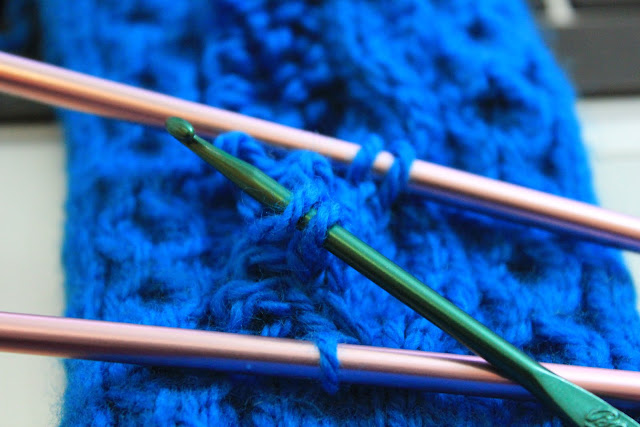 I continued in this manner, fixing one side at a time, until all the cables were fixed. I considered using the Yarn Harlot's method for fixing cable mis-crosses, but didn't want to fuss with the cut yarn on a small tube or have it come undone on me later. Also it's the center bit, so anything that looks off would really mess up the lines of the hat.
Posted by AnaMarie at 2:08 AM No comments:

In addition to the adult wear, I made a few pairs of mittens and hats for the little ones. Three of the four pairs of mittens have already been shown, and the last pair was made to match a hat. I hope all the kids like them, and really hope they all fit! 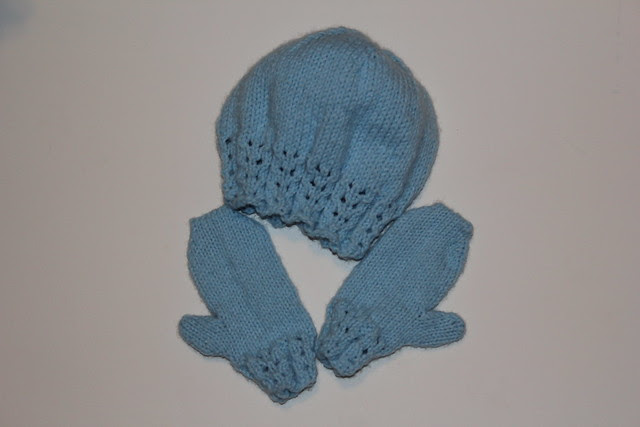 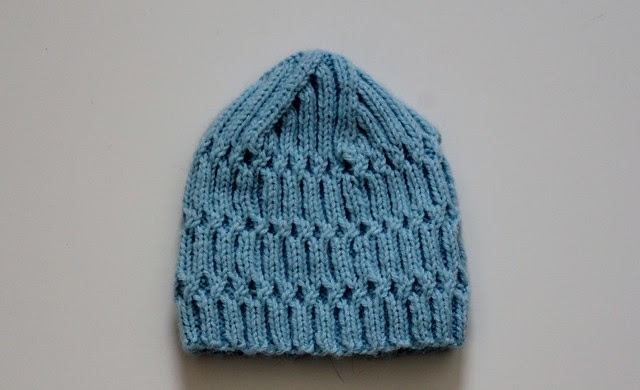 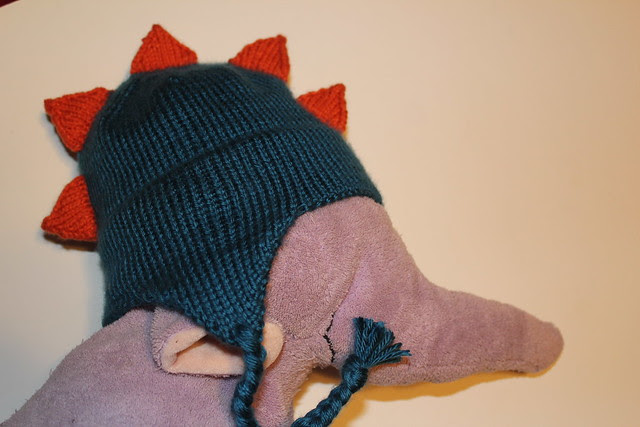 Pattern: Dino Cap (Ravelry mine)
Yarn: Caron Simply Soft in Ocean and Red Heart With Love in Mango
Needles: US6/4.0mm and US7/4.5mm
Timeframe: December 1 - 9, 2014
Mods: Fewer spikes, and I knit them in the round instead of flat.
Posted by AnaMarie at 1:18 AM No comments:

I whipped up a couple of quick winter accessories for my in-laws. One was from stash, and one added to the stash, but only a little bit. 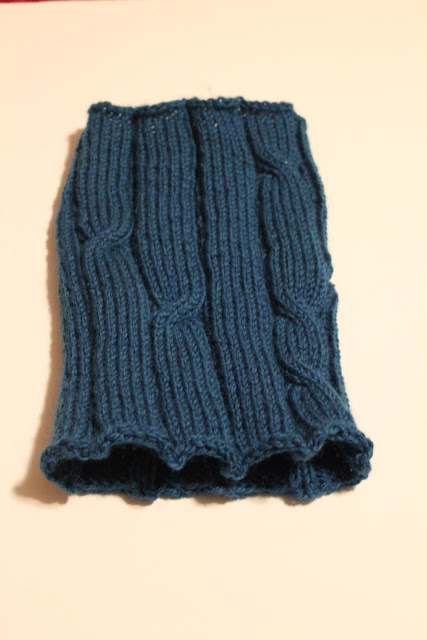 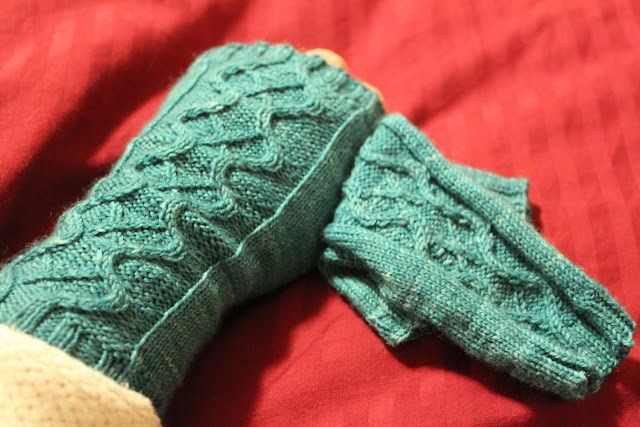 Pattern: Zombie viXen (Ravelry mine)
Yarn: Crafts Meow Ice Cream Sundae in Kamikaze
Needles: US2/2.75mm
Timeframe: December 4 - 14, 2015
Mods: Changed the center cable to be mirrored and pointing at the thumb
Problems: None!
Posted by AnaMarie at 9:45 AM No comments:

We love science. We love space. Jo-Ann's had some sciency-spacey fabrics. I could not resist! There's a braided fleece blanket with a spaceship on it: 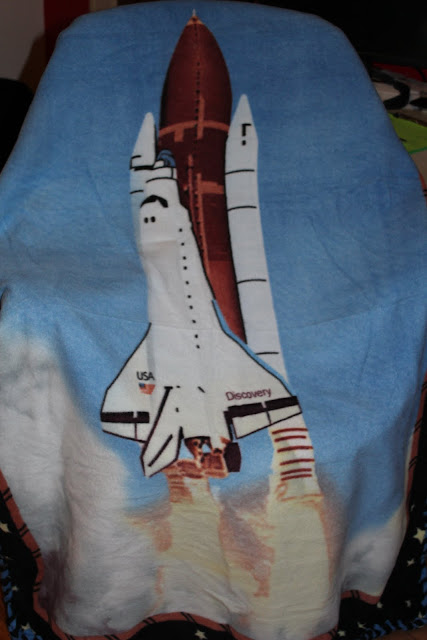 Pattern: Braided Fleece Blankets
Fabric: No-Sew Fleece Blanket kits from Jo-Ann's
Timeframe: November 29, 2015.
Mods: Didn't measure it out perfectly, but I think it's fine!
Problems: The cutting is a bit tedious and I was kind of annoyed that there wasn't a good border for braiding/tying around the star border on the main panel. Also the panel size didn't line up with the backing size, so there was a lot of waste to cut off of the blue backing panel. 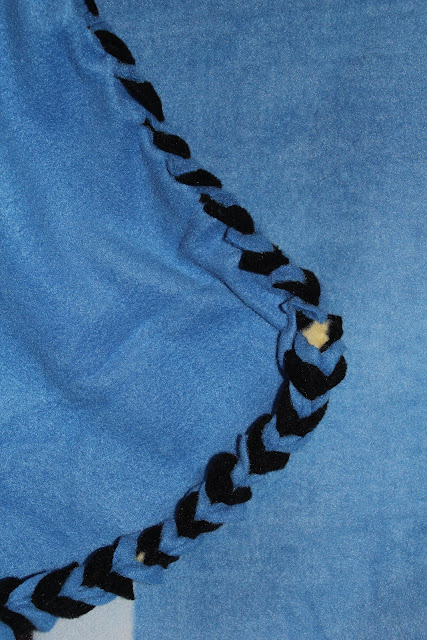 Then there's the pajama pants. I bought two fabrics for two pairs for my husband, to replace his old worn out pair. He only wanted the NASA fabric. I made a pair for me using the Avengers fabric. 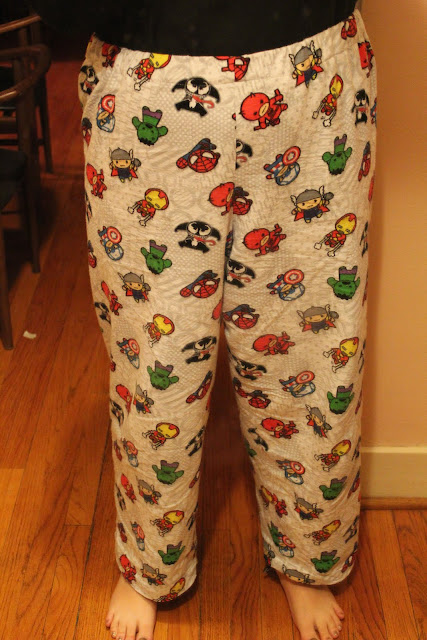 Pattern: Box Bag Tutorial
Fabric: Avengers and NASA licensed fabrics from Jo-Ann's
Timeframe: Roughly 4.5 hours total
Mods: The waistband is folded down further than the pattern requests on the first two pairs, on the third I just cut the top smaller and have very small hems for the cuffs.
Problems: None for the first two, but for the third, I cut the fabric to roughly the length required of the pattern before washing. It shrank almost 3". Luckily, this pattern has a higher-than-desired waistband and generous cuffs. 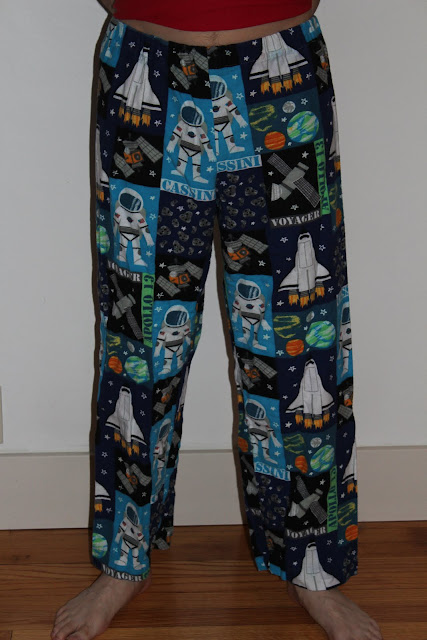 Then a friend saw the NASA pants and required a pair of his own. 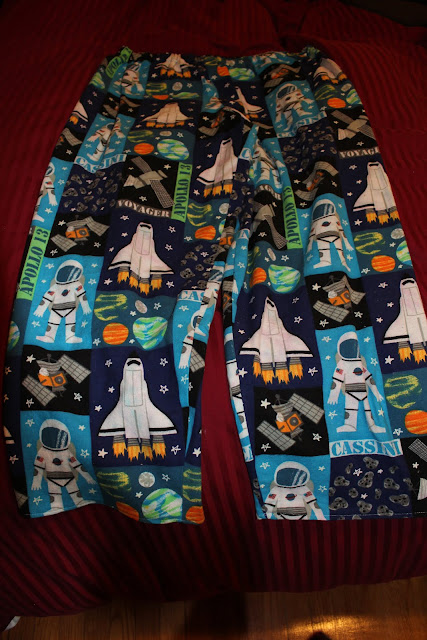 Posted by AnaMarie at 6:10 PM No comments:

I'm making a bunch of things for the holidays (surprise, surprise). One of those things happens to be adorable octopus mittens. 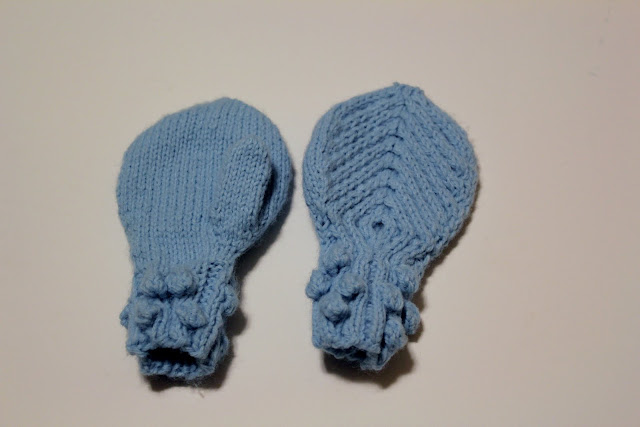 I did run into one problem though - the pattern has a chart. The chart only shows the thumb gusset for the right hand, and you have to look at the written instructions for the left hand. Guess who didn't remember this for the second one? 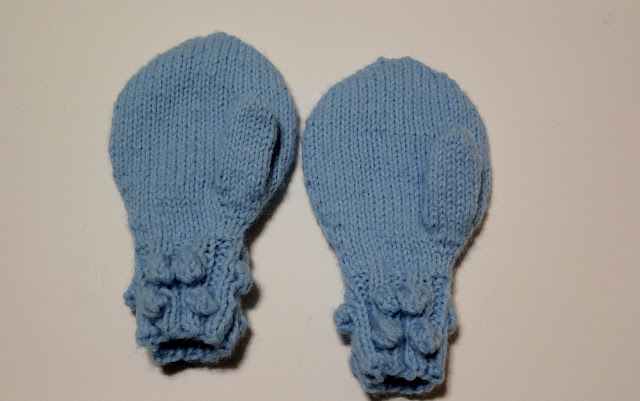 Oh well. Now there's two pairs. And they're both finished! 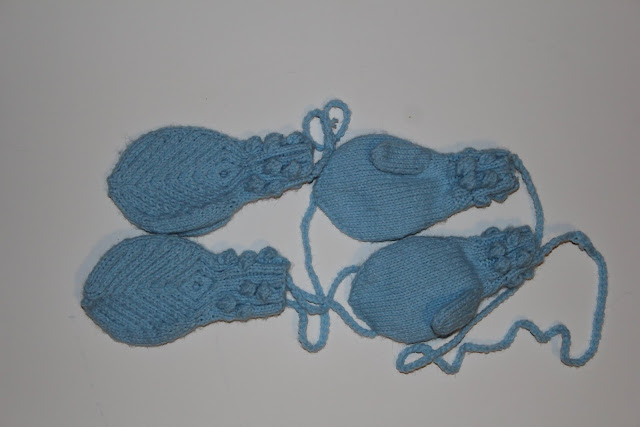 Posted by AnaMarie at 8:19 PM No comments:

I apparently have bad luck when it comes to US6 needles. I lost one tip on a trip a couple of years ago. Now, the end of the cord that the interchangeable tips screw onto has broken off. Inside the other US6 tip. 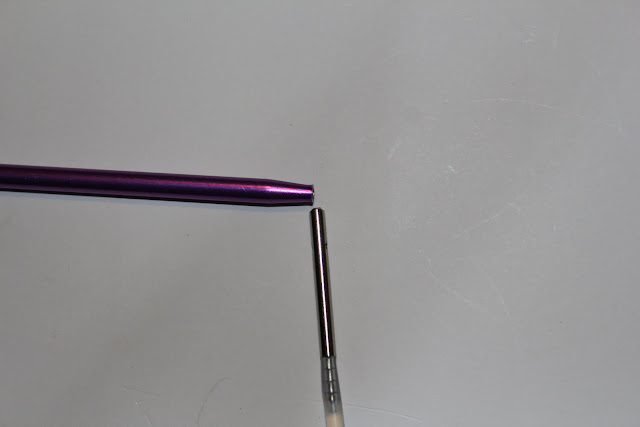 I don't have extra tips because when I tried to get a replacement pair, they were backordered and my order was cancelled. At least I have a pair of Addis to magic loop the hem and neck ribbing of the holiday sweater I'm trying to finish. I will have to get another cord from some project - I'm trying to decide if I have the time to knit a few inches, then bind off a cardigan for me that has a cord or if I should just use waste yarn. It's always a struggle getting things back on the needles if you take them off, and of course it would be better to finish something...Or I could always just buy a pair of Addis. I'm making Clapotises for my committee and they all require US8, the size that I need...hmmm....
Posted by AnaMarie at 8:25 PM No comments:

Yet another iteration of one of my favorite go-to patterns, felted clogs! 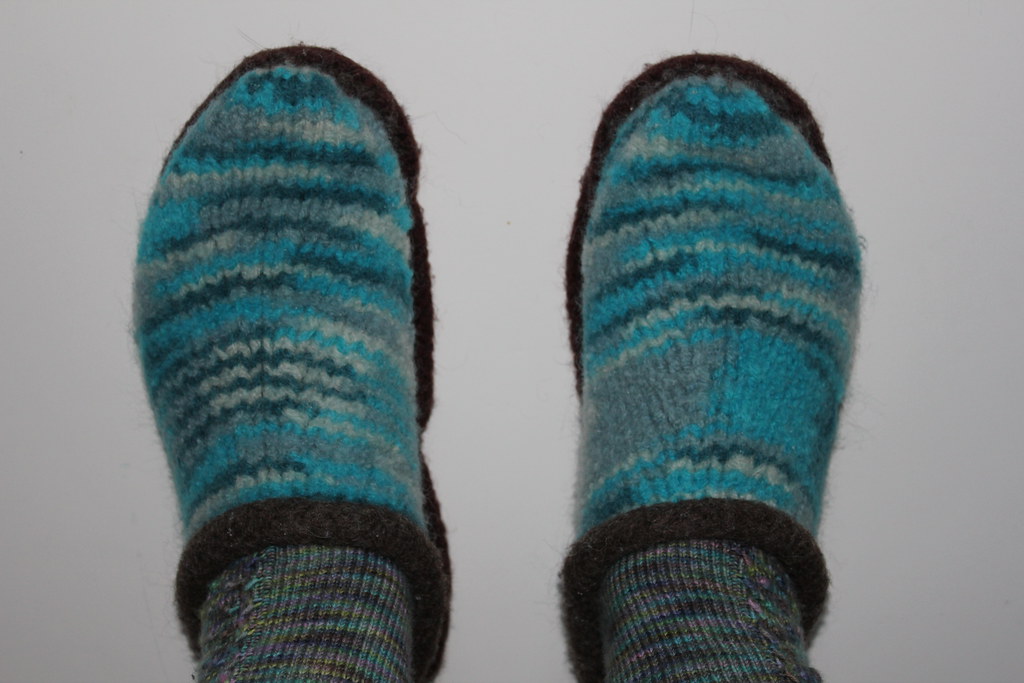 Pattern: Fiber Trends Felted Clogs (Ravelry, mine)
Yarn: Patons Classic Wool for the top, Lion Brand Fisherman's Wool for the sole
Needles: US13/9.0mm
Timeframe: October 9 - 13, 2015
Mods: I use Judy's Magic Cast-On to start the soles because I hate seaming.
Problems: None, except one clog kind of stripes, and the other pools. Not a problem, just a minor annoyance.
Posted by AnaMarie at 1:24 PM No comments:

I grabbed some of my stash for a quick hat for someone who will be going through chemo in the coming months. Hopefully she likes it! 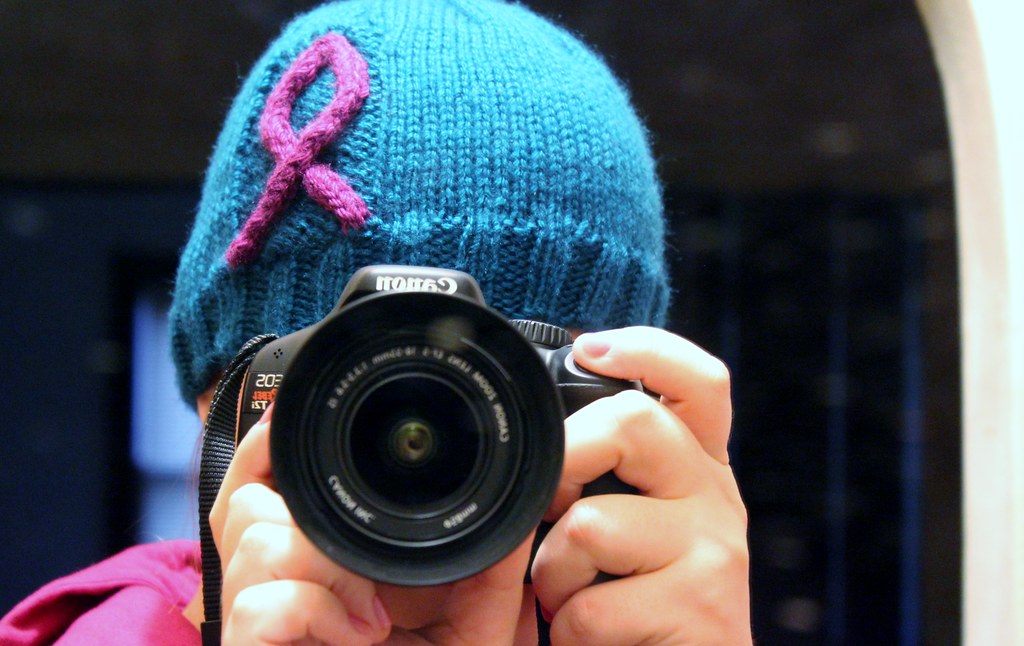 Pattern: Gold Ribbon Craft Hat (Ravelry mine)
Yarn: Caron Simply Soft in Pagoda and Passion
Needles: US7/4.5mm and US8/5.0mm
Timeframe: November 10 - 14, 2015
Mods: I did 2x2 rib, used a different color for the ribbon and did the pattern at the beginning of the round instead of the end.
Problems: None!
Posted by AnaMarie at 1:18 PM No comments:

I may be having all kinds of sock problems this year, but I did finish a sock without too many tears last month. I did cut too many strands of the contrast colors, but that's not a huge problem. 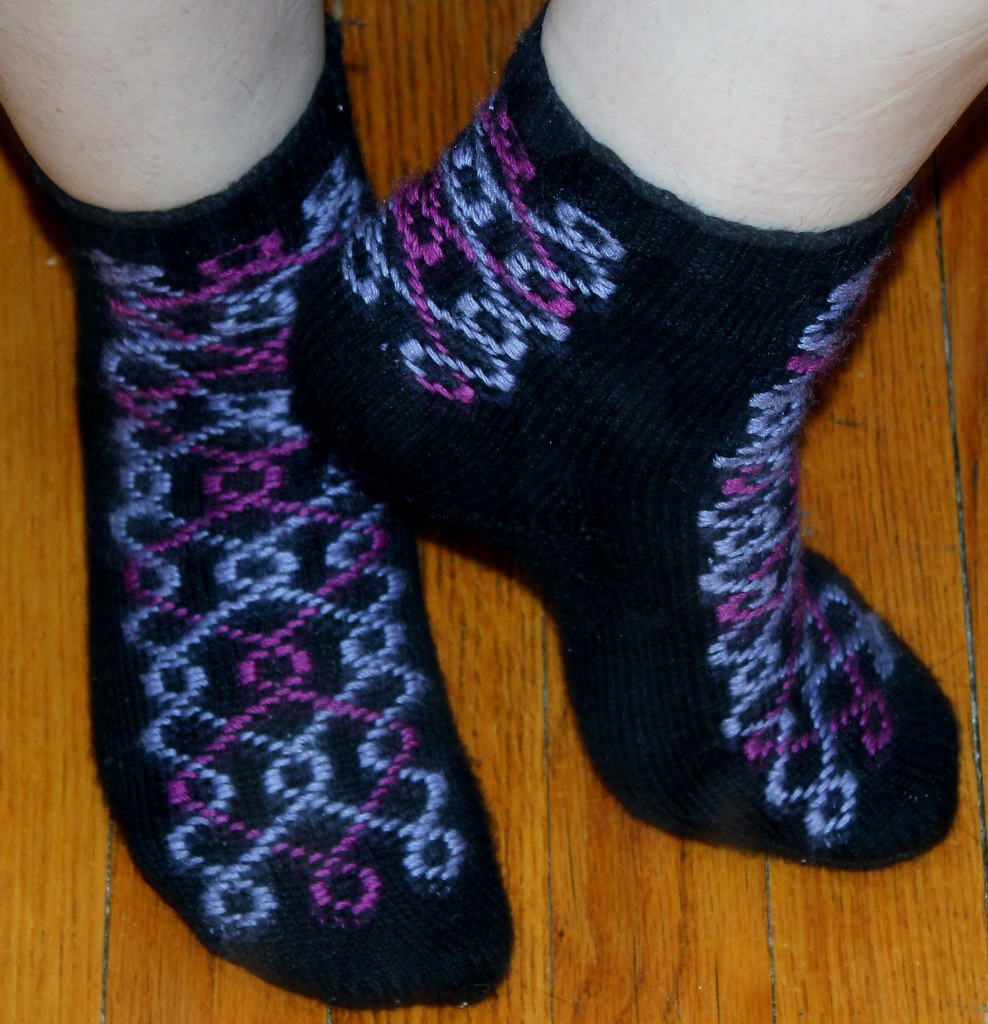 Pattern: Twisty Passages (Ravelry mine)
Yarn: Knit Picks Stroll (now Essential) in Black, Cascade Heritage in Raspberry and Lilac
Needles: US1.5/2.5mm
Timeframe: November 2 - 12, 2015
Mods: I continued the pattern a little longer down the leg than recommended, did my typical toe, and continued the pattern into the toe decreases to end it where I wanted.
Problems: I liked the heel at first, it's the first short-row heel that fit, but I'm not sure if the foot is just too short or the heel sits wrong. Either way, I think I'm still a fan of heel flaps for the most part!

Posted by AnaMarie at 1:13 PM No comments:

We haven't had much snow so far this year, and it's been warm enough that I haven't gotten much wear out of my sweaters yet. So I made some snowflakes! 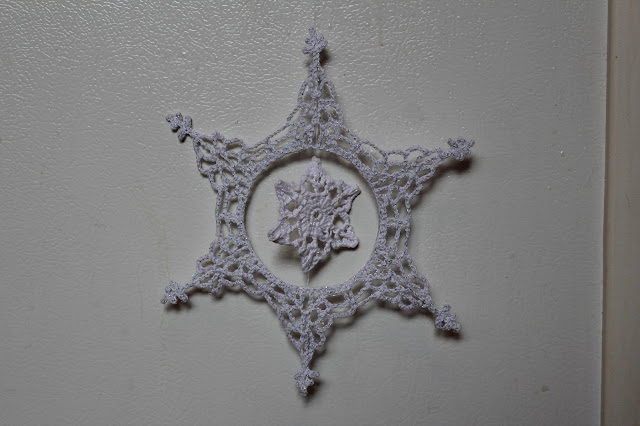 Pattern: Snowflake Inside A Snowflake (Ravelry mine)

Yarn: J&P Coats Royale Metallic Thread, silver for the outside, pearl for the inside
Hook: US8/1.65 mm
Timeframe: November 22 - 28, 2015
Mods: None.
Problems: Only in getting a decent picture!
Posted by AnaMarie at 1:08 PM No comments:

A couple skeins in, a couple false starts, and few finishes:


I'm surprised it went down at all!
Posted by AnaMarie at 5:28 PM No comments: