I paused to count the stitches on each side of the square when I was about halfway finished. I spent quite some time trying to figure out why the sides were not equal. I ripped down to where I thought the problem was. It was not the problem. I could not find the problem, so I ripped it all the way out. I cast on again, twice correctly, using the highly fiddly disappearing loop cast on. I knit a few lines.

I went to clean up the pile of yarn to make the living room less disorganized. I realized I have more of the gray than the red, because the gray is supposed to be the main color. The main color is the center of every square and the square that is all one color. 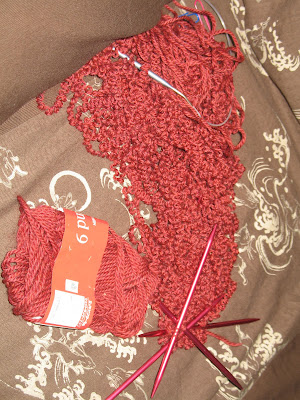 Re-do. Now I'm not sure that I'll be able to finish the entire thing, pattern and all, after having 0 progress to show after two days of the 14 possible days of work. Well, 0 knit progress, though I could write up the entire pattern now, since I have the pattern done. I think I shall do that.
Posted by AnaMarie at 12:51 AM No comments:

I have about seven unfinished posts languishing. I need to finish those and post them, but before I do, I shall attempt to blog progress for Knitting Olympics/Ravelympics daily. For an 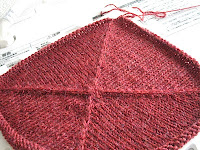 yone reading my blog but not in the know, you are supposed to set a challenge for yourself, begin when the Olympics begins, and end before the Olympics are over. For the Ravelympics, your challenge can be to finish things that have been languishing, rip out half-finished projects that you'll never complete, or even spin or dye yarn. For the Knitting Olympics, your goal is a challenging project (or multiple projects) that really stretch your skills as a knitter, whether in pattern difficulty, size, a new technique, or any combination of the above. I bought yarn for a couple of queen sized blankets in Tokyo, which need to be finished by August, so I'm using one of those as my Olympic project.

For these projects, on Ravelry there are different categories or events to "compete" in. I'm making a blanket and designing it from start to finish, so I'm in the designer's biathlon and the slalomghan, and the blanket will include colorwork, so it's in the Nordic colorwork challenge as well. The designers biathlon is making a project, from swatch to pattern, in the Olympic timeframe. This is a fairly large undertaking, as it's only a gold medal finish if you have the pattern up for free or sale through Ravelry by the end of the Olympics, which means pattern designed, sample knit, pattern written up, layout finished, pictures taken, and all of it packaged up nicely in a pdf. I figure that since it's a blanket that I'm designing, I may as well get the pattern written up and on Ravelry as well. 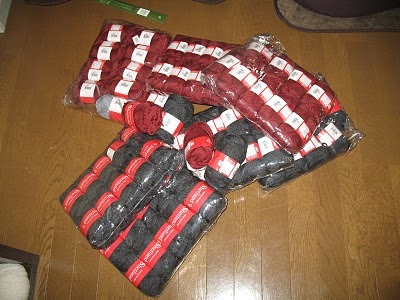 Due to time zone differences, the Olympics started at 11 am on Saturday here, so I had the local knitters who are participating in the Ravelympics over. We tried to watch the Opening Ceremonies, but it wouldn't stream, rolled some sushi for lunch, watched Dr. Horrible's Sing Along Blog and the musical episode of Buffy the Vampire Slayer, and spent a very long time knitting. I got an initial 10" block done, bound off, and now it's drying so I can figure out if if changes much with washing. I also learned that I'll want a fairly stretchy bindoff for this one; the k2tog bindoff is way too tight and doesn't allow the edges of the square to stretch out to the full 10". 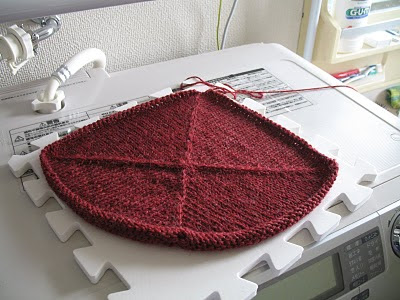 Today, Day 2, I should be finishing the square (if it dries) and finishing the pattern for the other 8 squares. The blanket will be a queen sized blanket of 9 squares, 8 patterned (the same pattern) and one plain square to make a Sierpinski Carpet. Once I've got the easy one color square done, I'll be able to finalize the design for the 2-color ones and get started on those. I need to do more than half a square per weekday and at minimum one square per weekend day to make it. This will certainly be a challenge, but that is what I signed up for!
Posted by AnaMarie at 9:54 PM No comments: