Now that it's no longer seasonally appropriate, here's what I made that was Halloween-themed this year: 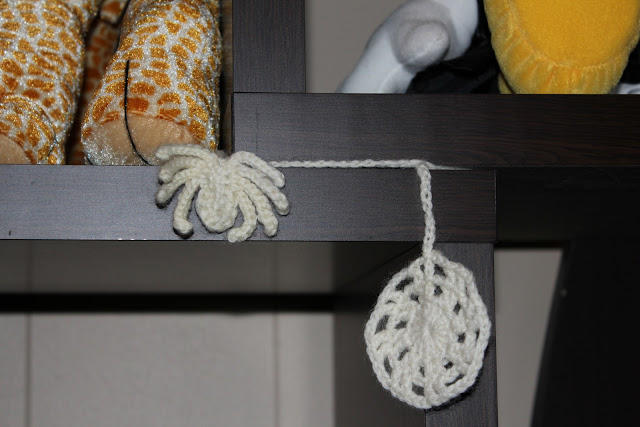 Pattern: Spider to Web Bookmark (Ravelry mine)
Yarn: New Hisuji-chan, Japanese yarn in white and some Wool of the Andes in Cloud when I ran out
Hook: USE/3.5 mm
Timeframe: October 1 - 30, 2012
Mods: None.
Problems: None, yet again.
The kitten liked it: 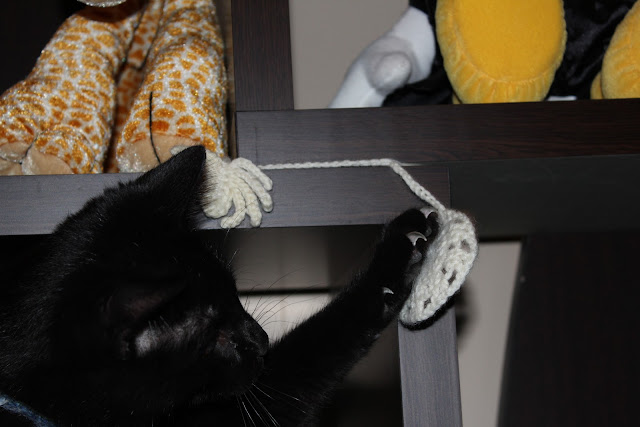 I also spun a bit in order to make a spiderweb. I thought an earlier skein would not be enough, so I spun more: 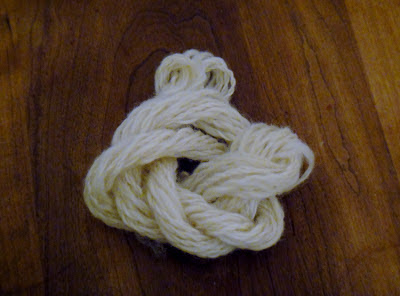 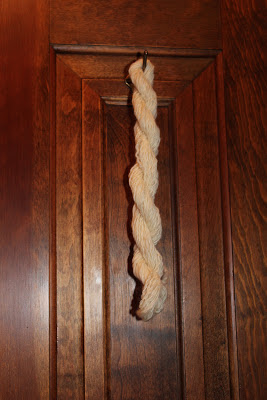 This seems to be the first handspun I've written up on my blog. I don't have a format for it! Let's see, important things:


Fiber: Undyed Correidale roving
Source: Copper Moose
Ply: 2
WPI: Ummm...didn't check. 16ish?
Final Amount: 22 yards, 11 grams and 14 yards, 7 grams
Problems: The first skein (on the right) was lovely, and I was surprised I got that out of my spindle. The second bit...not so much. It's not balanced (overspun, underplied?), it's tight whereas the first one has some loft, and I'm just not happy with it. Good thing it's going for a project where that doesn't matter! 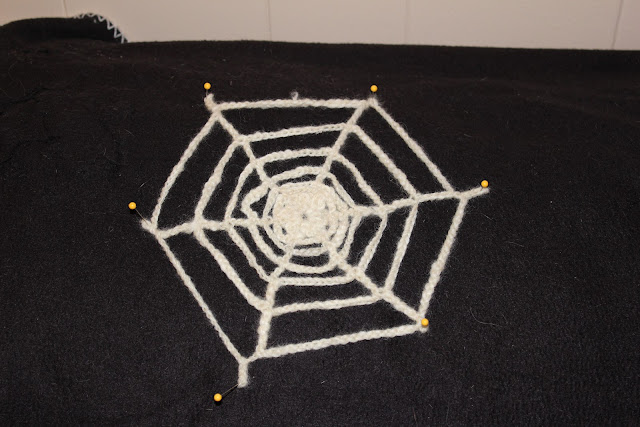 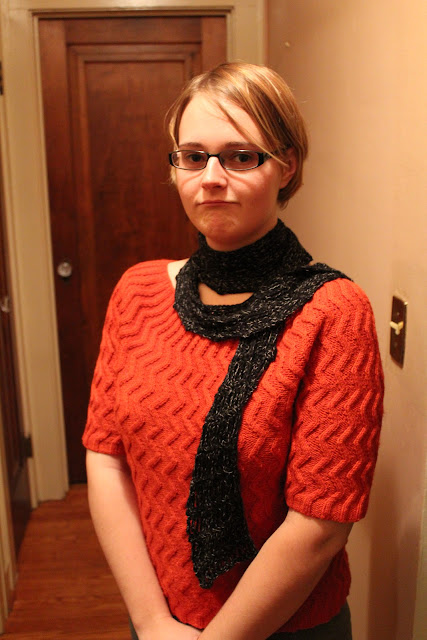 Hook: 4.0 mm/USG
Timeframe: October 2 - 30, 2012
Mods:None.
Problems: I'm not thrilled with how it turned out. It needs a brooch or something to keep it up - or maybe it needs to be made with acrylic that will keep its shape better. Something.

Posted by AnaMarie at 1:19 PM No comments:

And for November, we have a downward trend again!

For the Harry Potter Knitting and Crochet (and Weaving and Spinning) House Cup, we had a Quidditch Endurance challenge: Make 5 - 10 of the same thing. Didn't have to be the same pattern, but it did have to be something where you'd look at the pile of items and say "why yes, that is a bunch of _______." I chose washcloths: 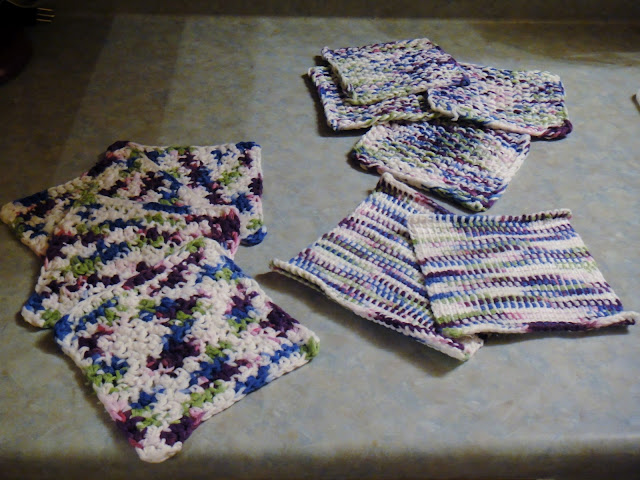 That is 10 washcloths in 3 different patterns. I like the simple Tunisian cloths because they look nice in a vareigated yarn and have a nubbly side for scrubbing. They don't look as great with this mostly-white vareigated yarn as they did when I originally made them. Apparently I didn't post the old ones (did I make them before I started blogging?), so here's a picture: 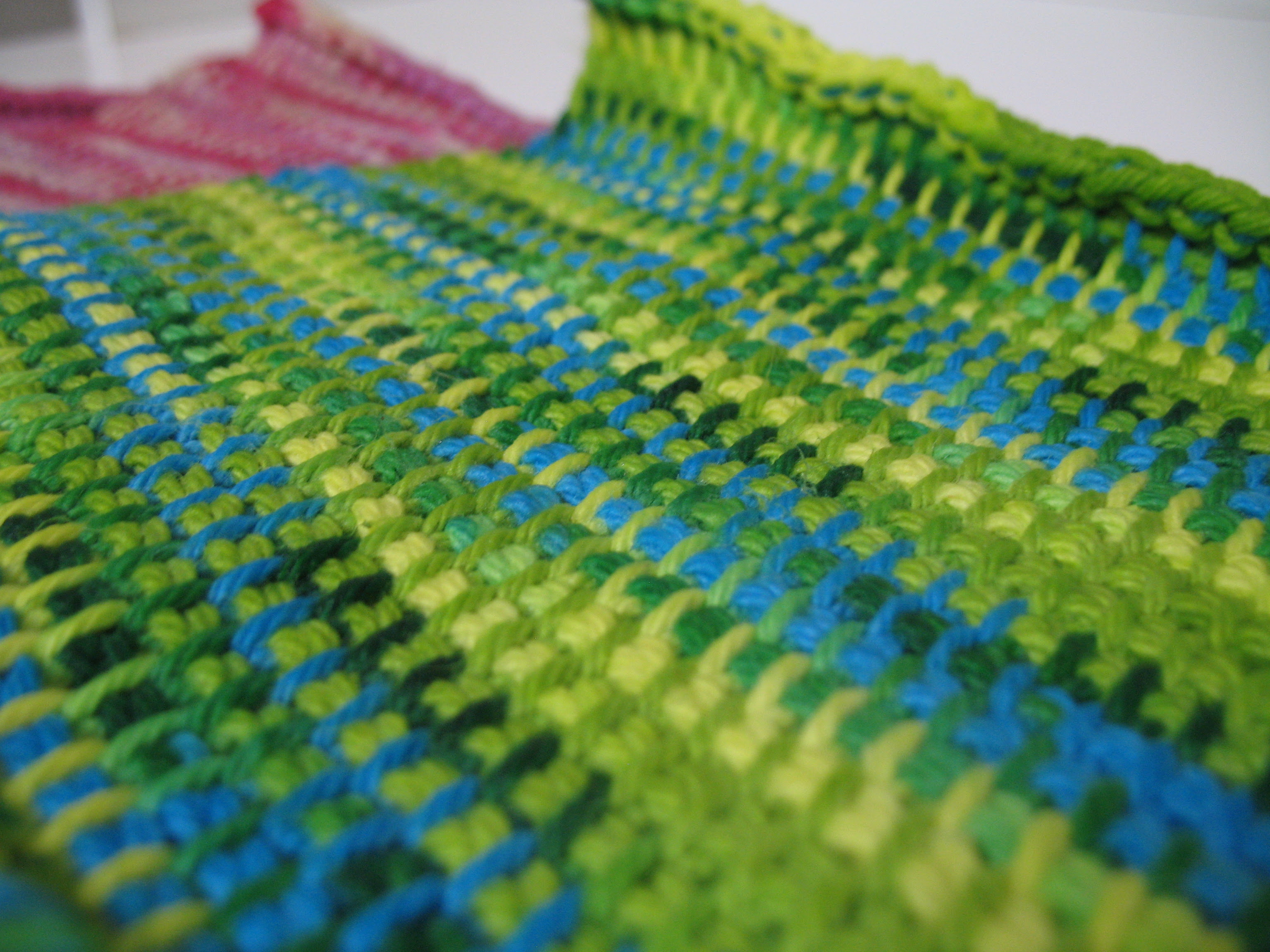 I love, love, love how they came out, the colors merge so wonderfully, and they were real workhorses. I tossed them when we left Japan because while all six weren't quite at the end of their useful lives, they were close, and it would be a good excuse to make some new ones that went with the decor of our new place. Of course, the decor at the new place is more "Goodwill chic" since we're slowly redoing everything, know we'll only be here for 3 - 5 years, and have no idea what we'll be doing next. I got a large skein of kitchen cotton that I thought was okay, and used just about half of it for the ten washcloths I made.

First up, the simple Tunisian pattern. I made one, started the second, and realized that I don't love the pattern with this yarn and I probably wouldn't get all 10 done for maximum points if I used this pattern. It's pretty slow going: 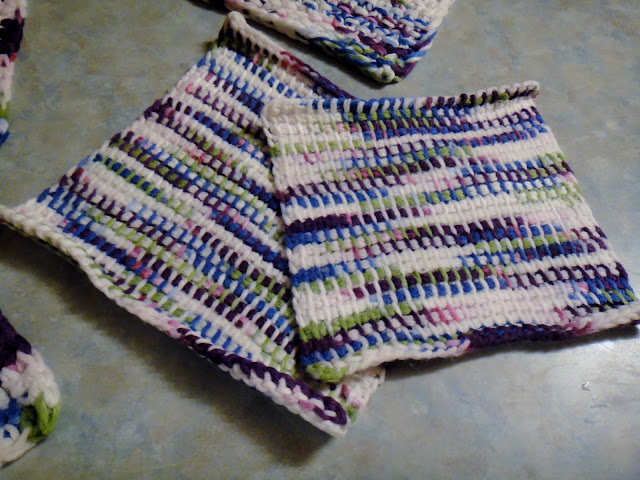 Pattern: None (mine)
Yarn: Bernat Handicrafter

Next, I stayed with crochet but used the cat cage blanket pattern for some washcloths. I liked the texture, so figured I'd try it out with these to see if it makes for good washcloths too: 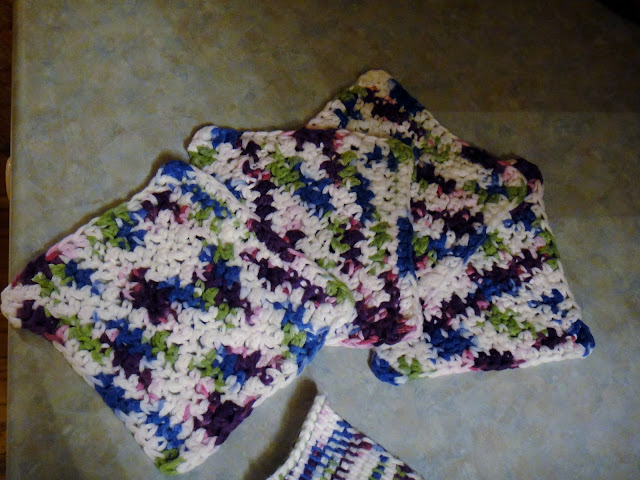 Hook: 6.5 mm/USK
Timeframe: October 14 - 26, 2012
Mods: CO only 15, work 'til square, hdc rather than sc border.
Problems: None!
For the last bunch, I wasn't sure if I liked the crocheted ones, so I tried another simple washcloth pattern that looked promising: 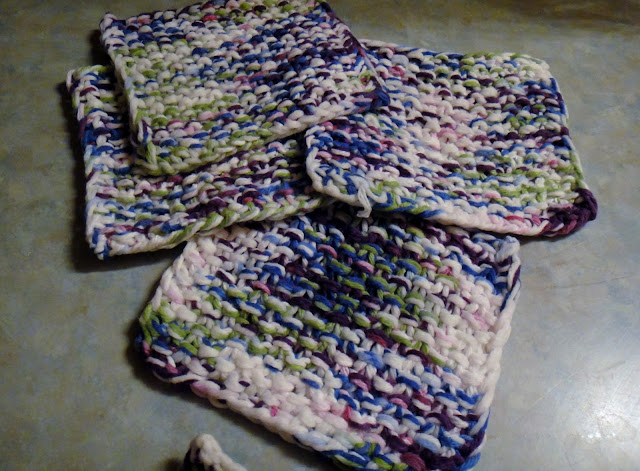 I've used one of these already, and they make great washcloths. I highly recommend this pattern if you want a quick and easy small washcloth.
Posted by AnaMarie at 11:22 AM No comments:

A local yarn store was having a closing sale. Oops!
Posted by AnaMarie at 2:24 PM No comments: