I showed off fixing the cable for my Neon Ski Bonnet before, but didn't show off the final hat. This was another thing I finished in India, then wore nonstop for a couple of days. My only complaint is that this yarn isn't really a worsted weight, it's a bit small, and it shrinks back up after repeated wear. It's great for a few days after a wet block and very warm. I love it, and I can tell you the color is much brighter, but I wish the yarn had either been a real worsted or kept its shape better. 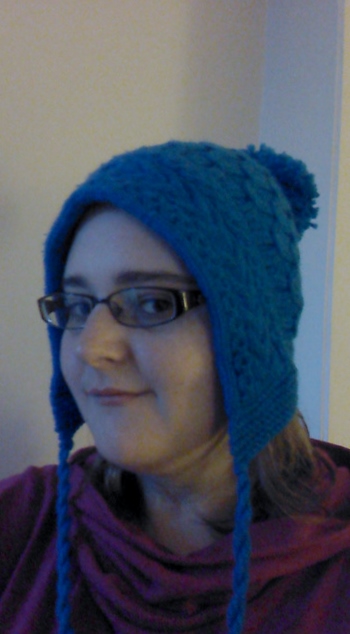 Pattern: Neon Ski Bonnet (Ravelry mine)
Yarn: Stonehedge Fiber Mill Shepherd's Wool Worsted in Turquoise
Needles: US7/4.5mm
Timeframe: November 16 - December 30, 2015
Mods: Stopped cabled band 1/2 row early in order to pick up stitches without breaking yarn, picked up an extra stitch on either side as a selvedge for the garter band, added an extra 1/2 repeat to give the hat depth and picked up 8 extra stitches for garter band, worked extra rows on the garter band.
Problems: None!
Posted by AnaMarie at 2:44 PM No comments:

Still plugging away on those WIPs. Some of them are taking a bit longer than others - I have a Helper who likes to Help. Sometimes, she is not actually Helping. 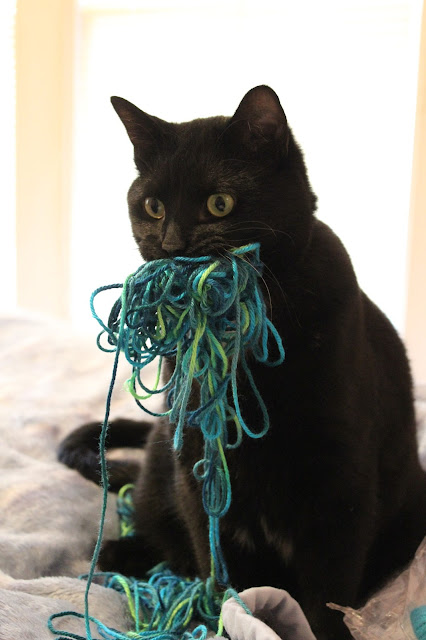 Posted by AnaMarie at 2:36 PM No comments:

Every so often, the crochet bug bites. This time, I wound up with a quick bookmark I sent to a friend, two owl coasters, also for mailing to friends, and a cowl whose fate is yet to be decided. The cowl was one of those things I HAD TO cast on the minute I saw it. It's not particularly my style, and the yarn I had wasn't particularly my color, but it was necessary. I'm a bit disappointed with how it turned out, it's a bit tight and tall - I'd do fewer stitches but more rounds if I were to make another. I'd also put it on right-side-out, which I apparently didn't do in this picture! 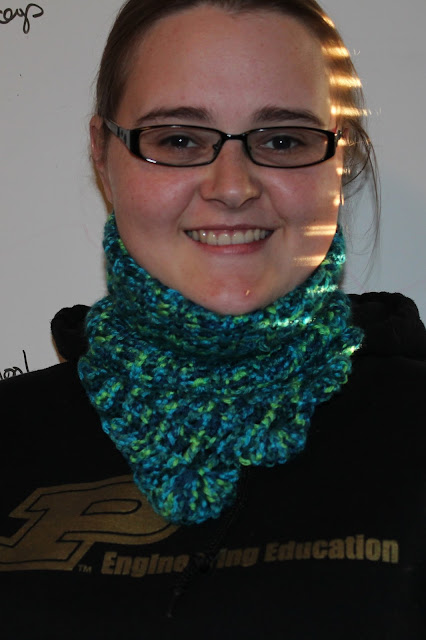 Yarn: Caron Simply Soft Paints in Peacock Feather
Hook: USJ/6.0 mm
Timeframe: January 23 - 25, 2016
Mods: None!
Problems: There are some errors in the pattern and some confusing bits in the scallops. Also, I'd work fewer stitches but more rows if I were making this again. 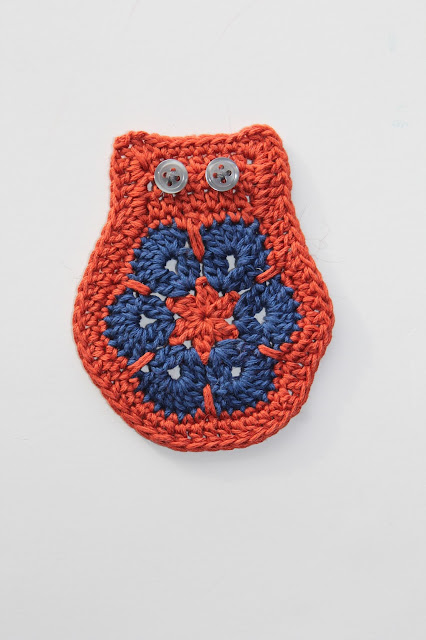 Hey look, I'm repeating a pattern I've made before! What a surprise! 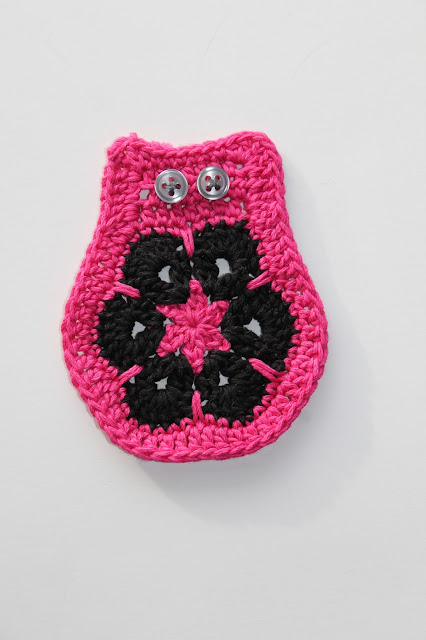 Yarn: DMC Senso Cotton and Microfiber Cotton
Hook: USD/3.25 mm
Timeframe: February 8 - 14, 2016 (they take less than a day, but sat around waiting for eyes!)
Mods: Used buttons for eyes and didn't add a beak.
Problems: None! 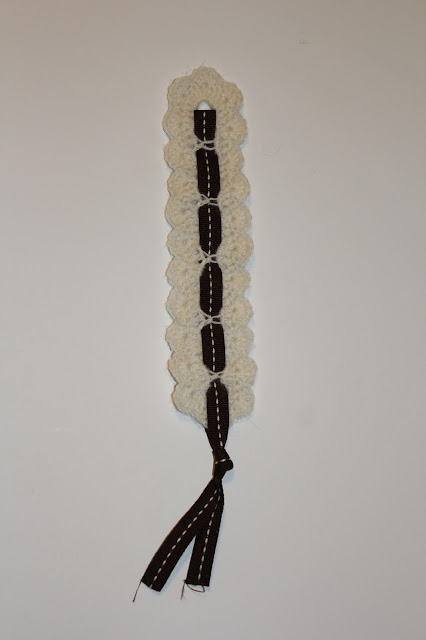 I also made a few doily frisbees for niblings for the holidays last year. I thought they were excellent! 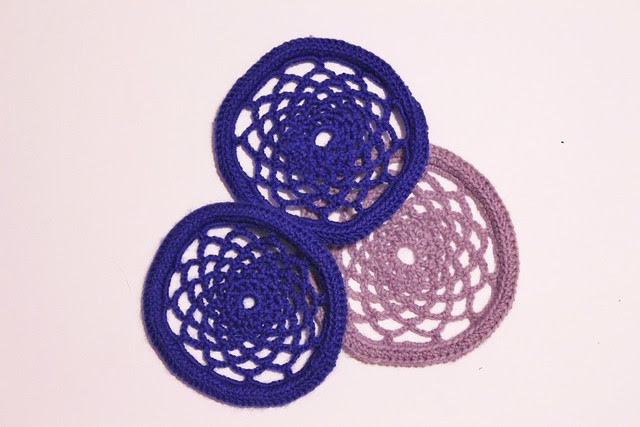 I knit replacement hats and mittens for my niblings (niece and nephew) because the ones I originally knit didn't fit. These are a bit later than intended, but at least the mittens should last a couple of years! 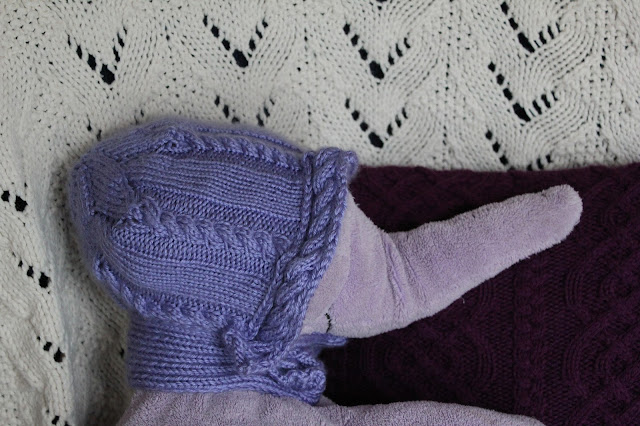 Pattern: Frileuse (Ravelry mine)
Yarn: Caron Simply Soft in Lavender Blue
Needles: US6/4.0mm
Timeframe: January 7 - 21, 2016
Mods: Added the cabled brim and a hole in the scarf to put the other end of the scarf through.
Problems: I'm not sure it's big enough and the scarf portion seems short. 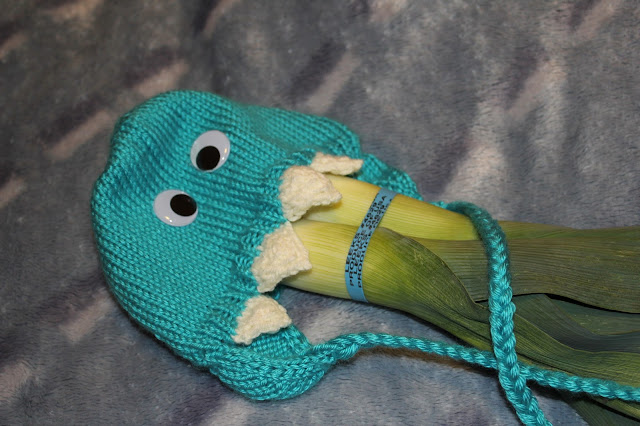 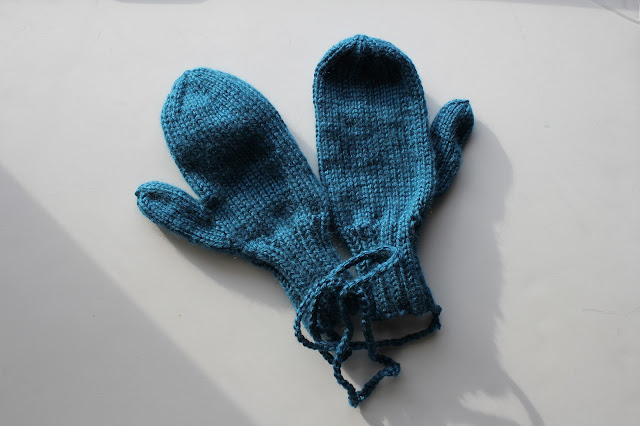 Yarn: Caron Simply Soft in Mint Blue and Lavender Blue
Needles: US7/4.5mm
Timeframe: January 31 - February 14, 2016
Mods: Added another round of K2tog on the thumbs.
Problems: None! 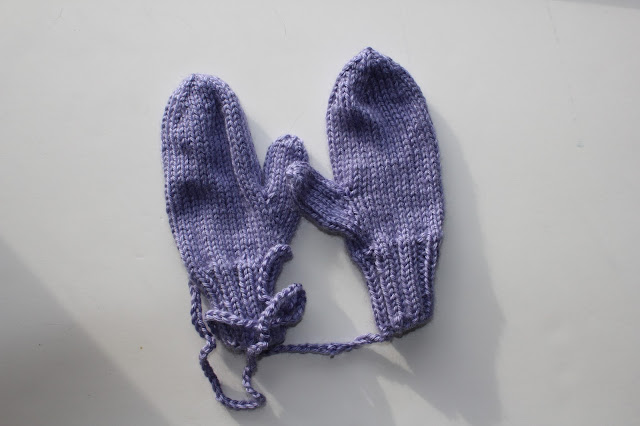 Posted by AnaMarie at 1:56 PM No comments:

For the first semester of the second year of Loopy Academy, you have to knit a pillow. So I did! 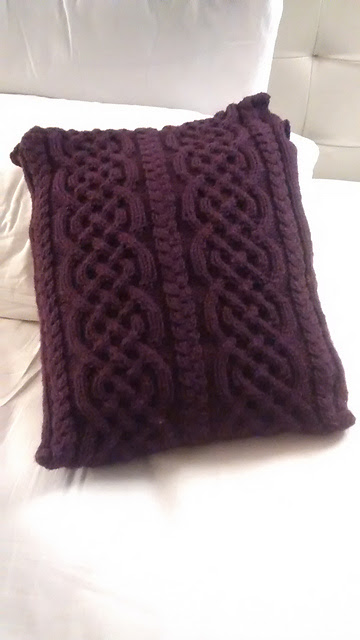 This was another project that I brought to India. I finished it there, after only a couple day of knitting, but didn't really have a good pillow to model it on. I also hadn't yet decided how to finish off the back. I wound up putting some Velcro on it after I put it on the pillow it will live on at home. 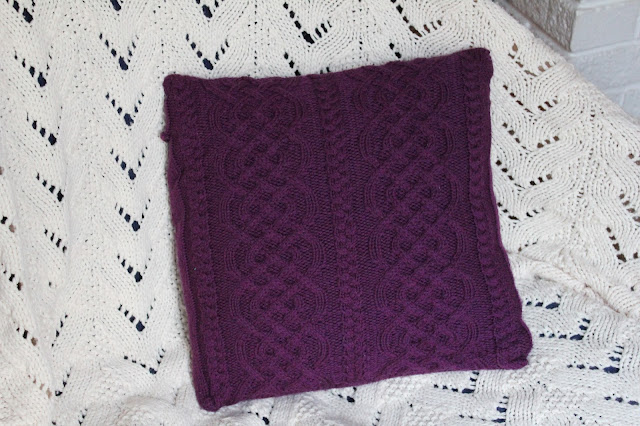 Pattern: Celtic Knit Aran Pillow (Ravelry mine)
Yarn: Cascade 220
Needles: US7/4.5mm
Timeframe: December 26, 2015 - January 18, 2016
Mods: Took out a few stitches to make it fit better, did it as one piece rather than front and backs, and made a different opening. See the Ravelry page for more information.
Problems: None!
Posted by AnaMarie at 1:53 PM No comments:

I took a bunch of knitting on my trip to India, including yarn for four pairs of socks. Two of those pairs already had at least one sock done and both of the others were mostly stockinette, so it wasn't too crazy or ambitious. It was the other yarn I also brought that made it a bit much!

I finished one pair of socks while in India, a lovely green pair of mystery socks that I really enjoyed working on: 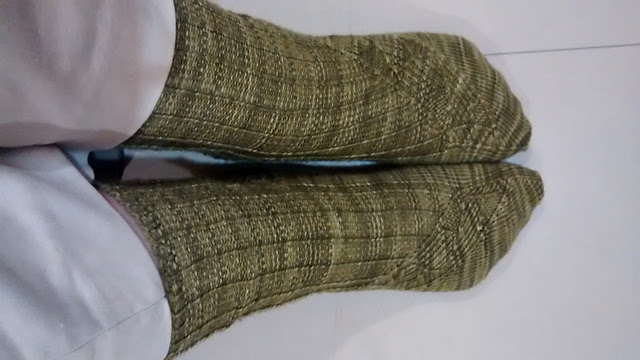 
I didn't touch the other sock-in-progress, but I did start one of the fresh skeins and finished one sock on the journey home. The other sock wasn't too far behind: 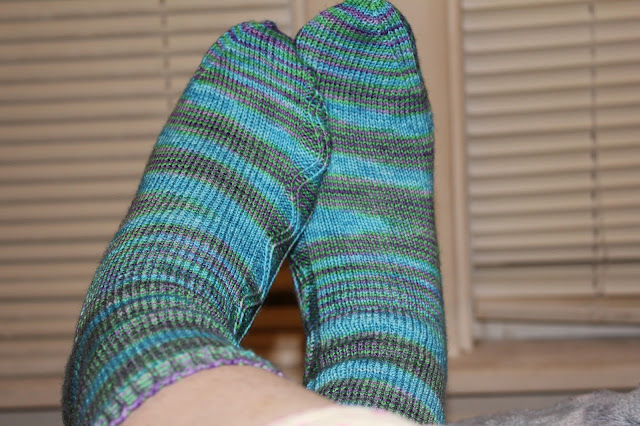 Pattern: Zigzagular Socks (Ravelry mine)
Yarn: Eden Cottage Yarns Fantasia in the 2010 Club color Peacock
Needles: US1.5/2.5mm
Timeframe: January 2 - 30, 2016
Mods: Taller heel flap for my large instep, continued patterning into the toe decreases.
Problems: None! I did have some problems earlier with a different yarn. I was worried I'd have the same problem with these, as it's the same dyer, but the different sock base made the pooling work out in a reasonable way this time.
Posted by AnaMarie at 1:47 PM No comments:

It took me more time than anticipated to finish a holiday sweater for my nephew. The yarn, Lion Brand Pound of Love, was really weird. It wasn't quite a worsted, but was larger than a DK, and just knit up oddly. I don't think I'd ever use it again. None of the hats or mittens that I made with it turned out the right size (they were all too small) and I just was not happy knitting with it. I have to find something to do with the leftovers; I want it out of my stash! 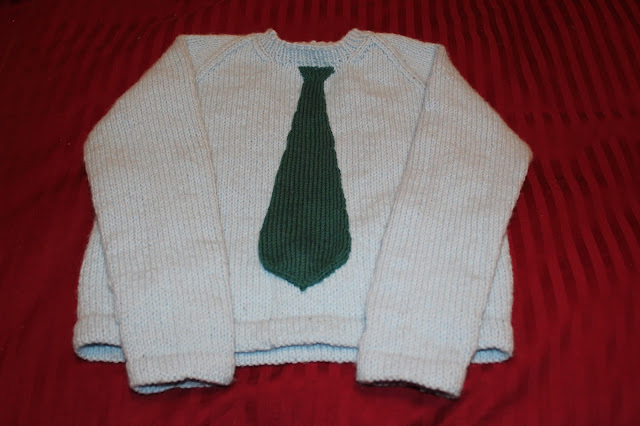 Pattern: Boys Can Wear Pink! (Ravelry mine)
Yarn: Lion Brand Pound of Love in Pastel Blue and Stonehedge Fiber Mill Shepherd's Wool DK in Great Lakes
Needles: US6/4.0mm and US8/5.0mm
Timeframe: December 1, 2015 - January 15, 2016
Mods: Used the smaller needle for the inside of the turned hems and the neck ribbing.
Problems: The yarn is odd. The body is a bit big, but the sleeves seem fine. Strange, very strange.
I realized after I put it on that the tie is not in a superwash yarn. I really, really hope that it doesn't shrink when washed!
Posted by AnaMarie at 1:39 PM No comments: