This month I started buying yarn for a friend's wedding blanket and had to get another skein to finish up some planned projects, so I wasn't anticipating much of a decrease in the yarn count. The projects I finished this month were mostly multi-skein ones, so I did use more yarn than I purchased this month:

I'm hoping to buy most of the rest of the blanket yarn next month and am getting back to that roving that's been sitting on my wheel. I anticipate an increase in yarn next month!
Posted by AnaMarie at 1:48 PM No comments:

Of course, on the day I wrote this post about how I was using an old project as my carry-around project, I felt it. The itch. The itch you just can't scratch. The need to start something new. 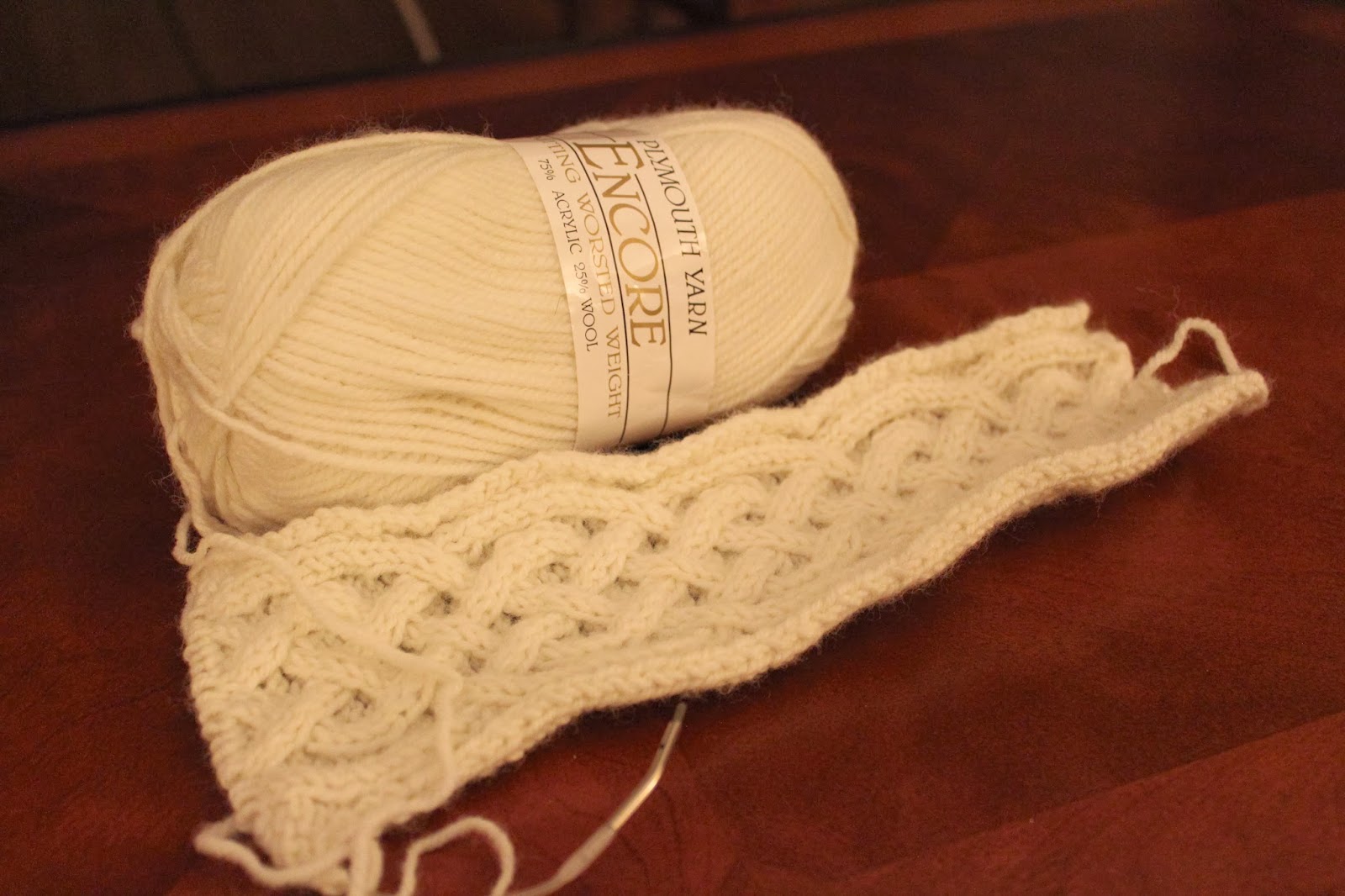 I've had some Plymouth Encore hanging around in the stash for awhile and it is past time to move the two-ish gorgeous sweaters it can be from intention to reality. For now, it's little more than the yoke band and picking up speed quickly.
Posted by AnaMarie at 7:32 PM No comments:

Another finished thing! A set even! I am on a roll! 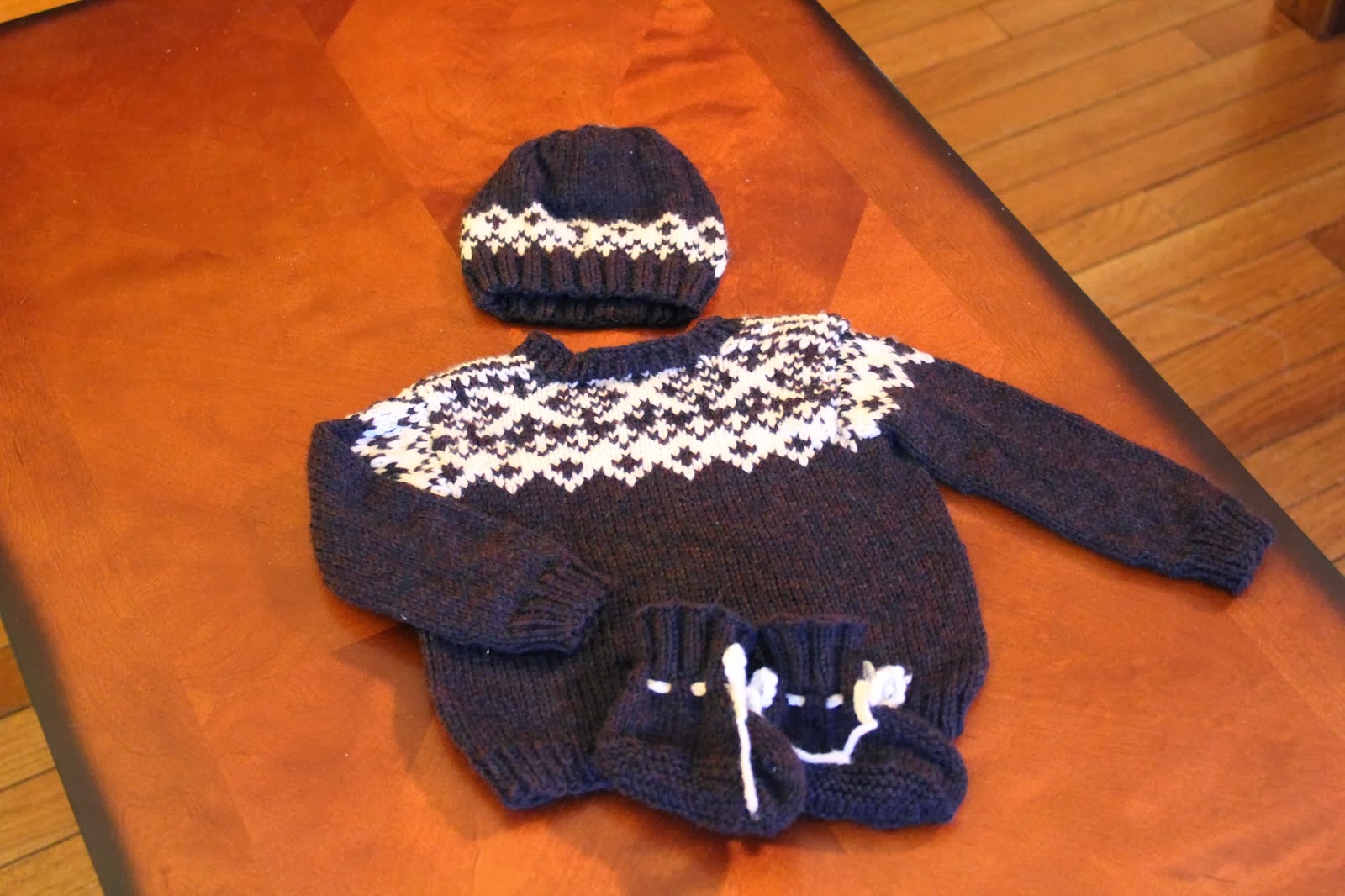 As I've said before, EVERYONE has been having babies! Here's a set for a little guy who isn't here yet. Originally, the sweater pattern was three colors with lice stitch all over the body (little flecks of white), but we decided to take it down to two colors and skip the lice stitches. Then I messed up the pattern on the body, so I went with the mistake for the sleeves and hat instead of going back to fix it. I'm pretty happy with how it all turned out, though the seams where the sleeves attach to the body seem a bit tight. 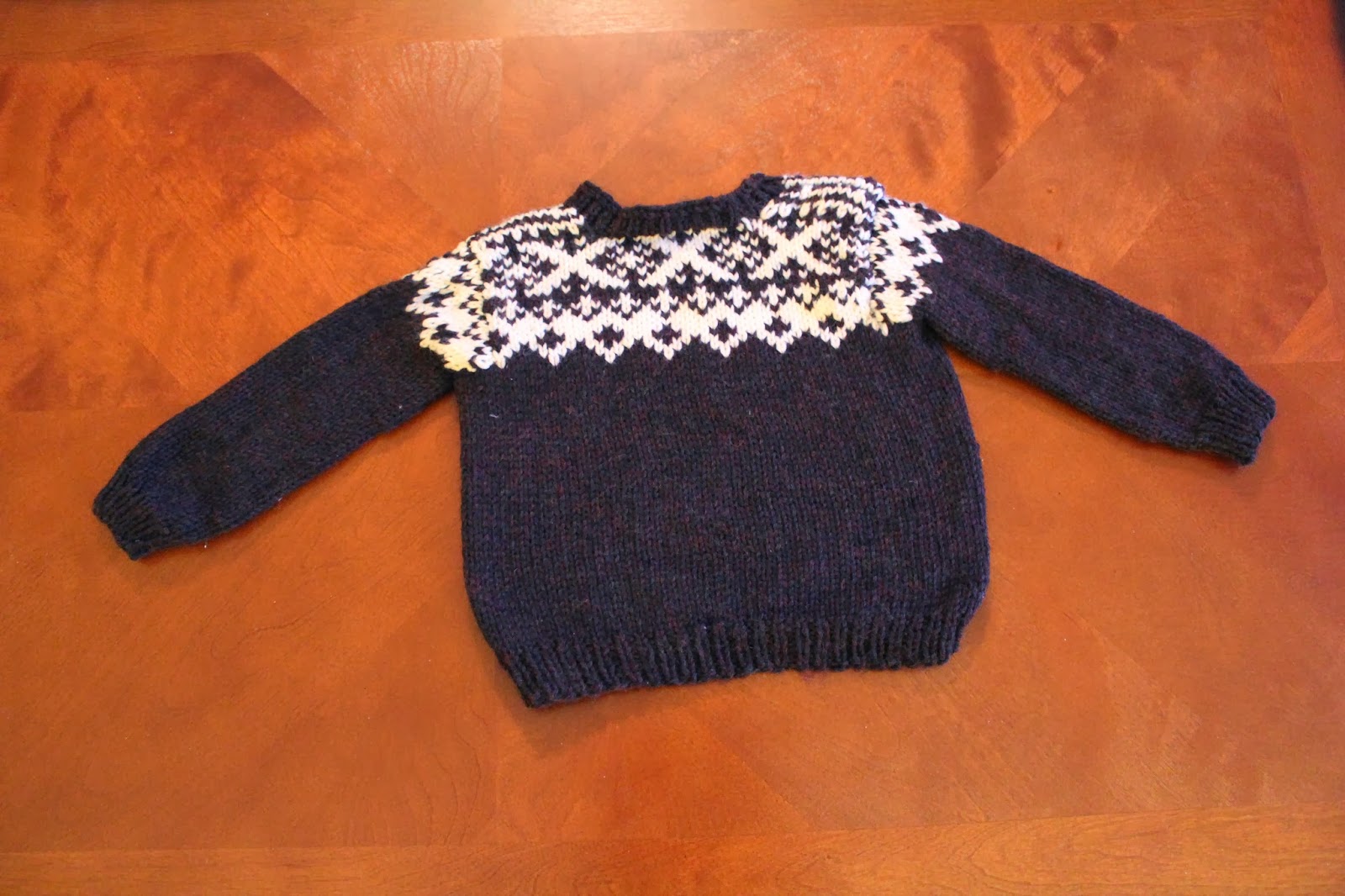 Pattern:  b21-18 "Rubin" - Jumper in ”Merino Extra Fine” (Ravelry mine)
Yarn: Knit Picks Swish DK in Lava Heather and White
Needles: US6/4.0mm and US7/4.5mm
Timeframe: January 2 - 21, 2014
Mods: No lice stitches, no third color, messed up the pattern and went with it.
Problems: The sleeve seams seem a bit tight. I originally bound off the neck too tight but re-did that and it should be fine for a baby's head. 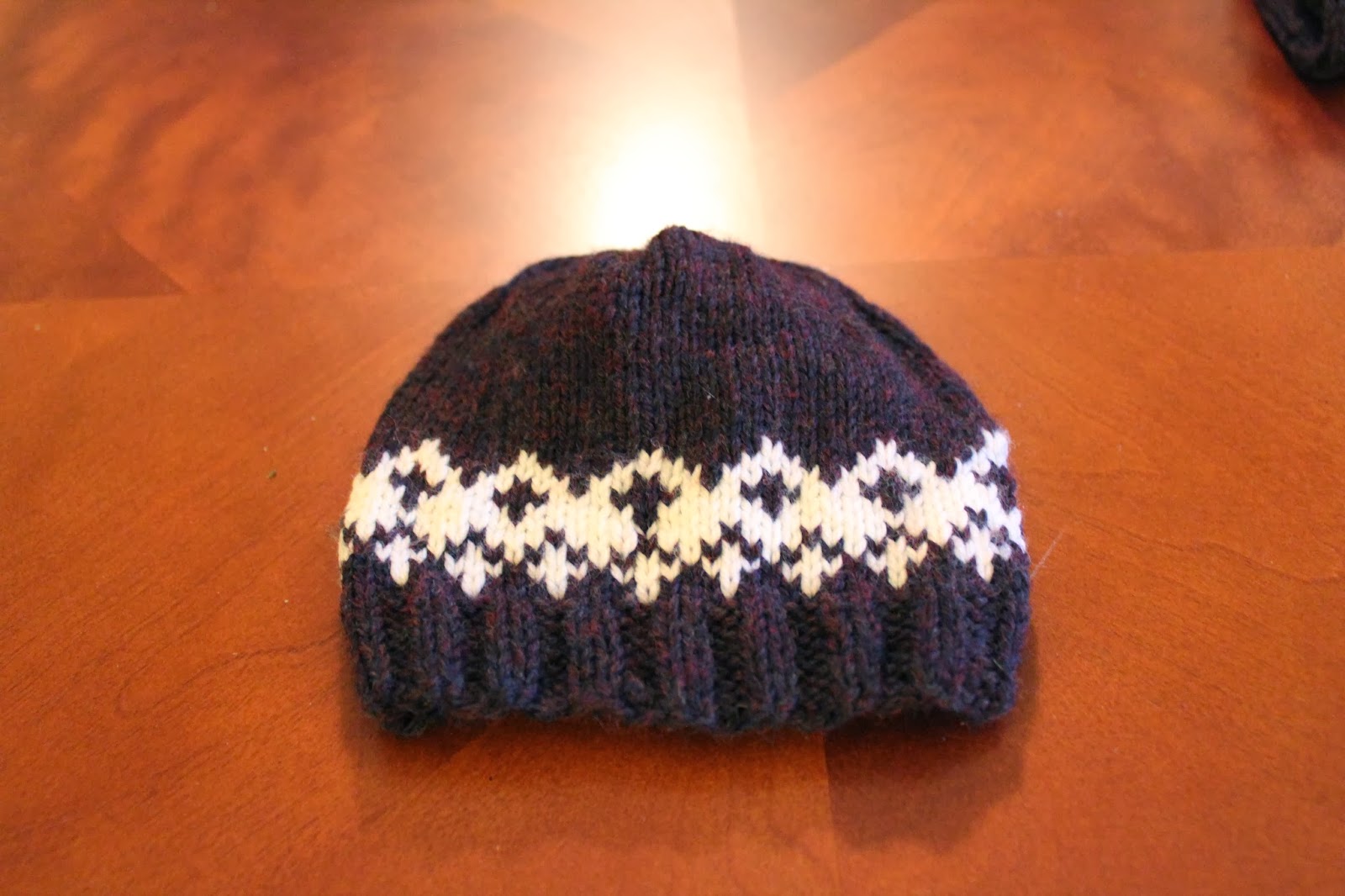 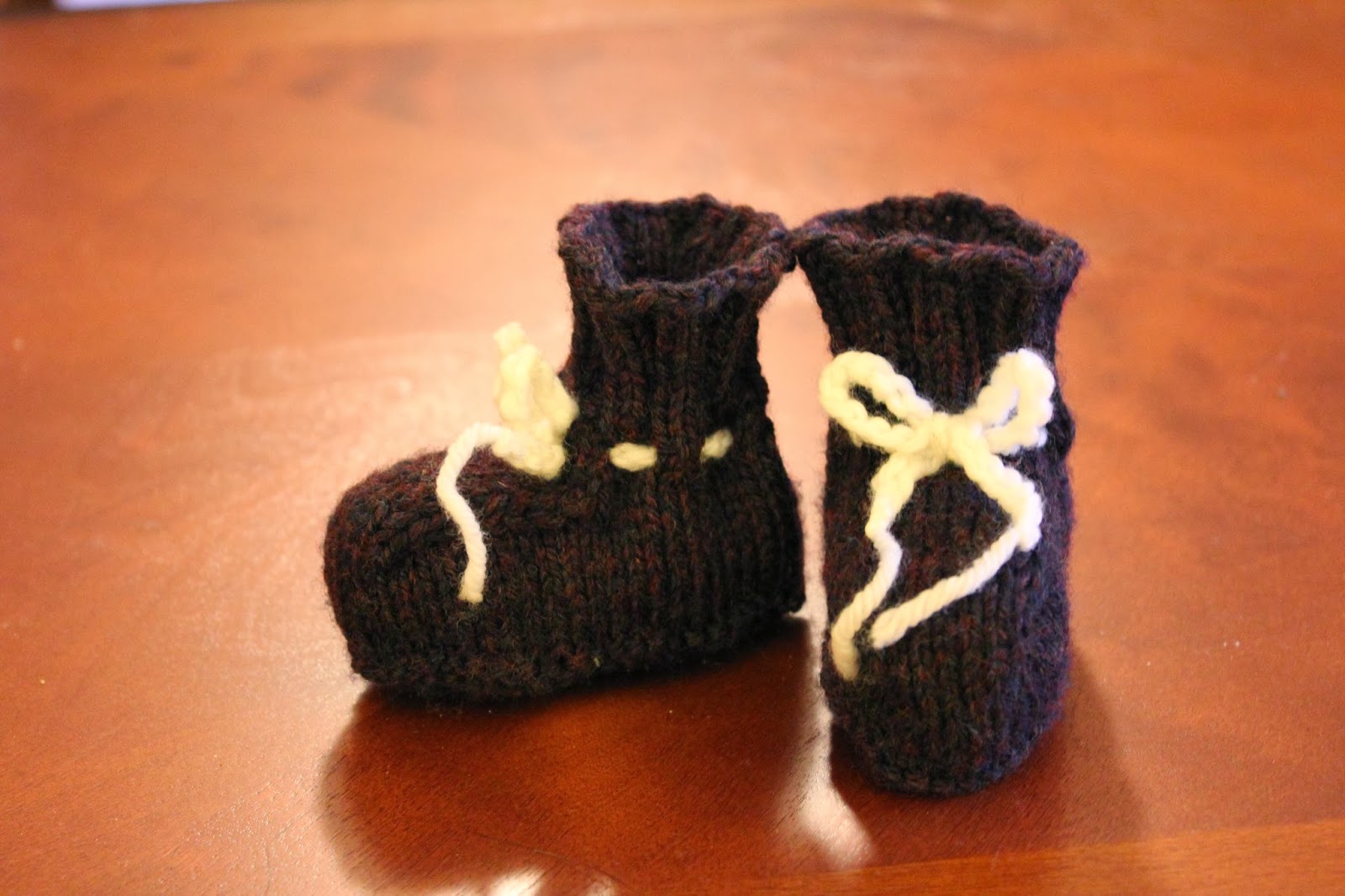 Pattern:  Seamless Baby Booties (Bottom Up) (Ravelry mine)
Yarn: Knit Picks Swish DK in Lava Heather and White
Needles: US5/3.75mm
Timeframe: January 19 - 21, 2014
Mods: Shortened the ribbing, added a crochet chain rather than a ribbon for the ties.
Problems: None!
Posted by AnaMarie at 8:51 AM No comments: