So, my goals for the year are to read 12 books on the lists over on the right-hand sidebar and at least one in Japanese (I have Harry Potters 1 and 2) and to finish more projects than I did last year. That goal is a bit high, because it's near 50. Last year I finished a lot of UFOs that were languishing and didn't bring that many to Japan with me, so don't have nearly as many that are quick finishes. I do have some smaller projects and a heck of a lot of time in July when I'm on vacation but Lee isn't, but 50 just seems like a lot. Especially since I'm knitting, crocheting, and cross stitching mostly larger things.

Book-wise: I've read 22 books. That's nearly one per week. That's about how many projects I should have finished at this point. However, only four of them have been on lists that I've been reading on. Well, six really, but the fourth is Fellowship of the Ring, and it's listed as part of the whole Lord of the Rings trilogy, and the fifth and sixth are books in the Discworld series which is also listed as just Discworld, so they don't quite count. I should have read five by now, and be halfway through the sixth, instead of having read four and three halves (I'm in the middle of three other books that do count!). Take a look over at the sidebar for my new widget from Goodreads, a site where I keep track of books I read!

Project-wise: I've finished thirteen projects, and will have another three done by this time next week or I don't get to put my new Kromski Minstrel together. Then I'll be working to get all of my currently languishing WIPs done in July for Ravelry's WIP WrestleMania (WWM). It's an attempt to clean out your needles in preparation for the Winter Olympics knitting so you can start fresh projects on empty needles with a clear conscience. I'm also participating in Summer of Socks, so will be glad to empty the needles of the three pairs that are currently ongoing, and probably a fourth (and/or fifth) pair I'll be starting before July to up my WIP count. I think a summer goal will be to come back from break with a week's worth of work socks. I currently have one pair (two on the needles), and yarn for a week's worth, so I should get to it!

As for WIP count, my goal is to have all my open projects down to single digits, and I'm getting a spinning wheel, so that will open up a whole new column of projects on the sidebar. As of right now, I have been failing somewhat miserably, due to getting down to 10 or 11 and casting on 3 or 4 more projects. I think I've done that two or three times this year already. I shall up the number to maybe even 20 for July, and then cut back sharply until I have only three or so things on the needles, a cross stitch or two (that will take forever to get those finished and down to two!), and then some spinning/sewing/crocheting/quick gifts that keep the number under 10.

For July, I'll be pretty much casting something onto all of my open needles. Every single one. This way, not only can I not cast on any more, but I can also work on pretty much whatever I feel like working on and can have two or three quick, simple knits at the ready to jump to if I need a break from the bigger ones. I have summer vacation for most of July, and Lee has to work for a good deal of it, so I'll be hanging about, seeing local sights and knitting a lot.

August will be my month of Christmas knitting, as I've gotten patterns and yarn set for most of my intended recipients. I'm not looking at anything terribly intense, a bunch of laceweight cowls, a pair of gloves, maybe some Pocket Creatures, and a couple of pairs of socks. Okay, so I lied, that is actually kind of a lot. This is why I'm starting in August, so that I can be done early-ish. Also, I will be starting at least the first cowl, pair of socks, and probably the gloves and/or knee socks later this month so I can count them as WIPs for WWM, where I will be working on nothing but WIPs.

Soon, there will be FO posts for my latest conquests, and hopefully in the very near future, this: 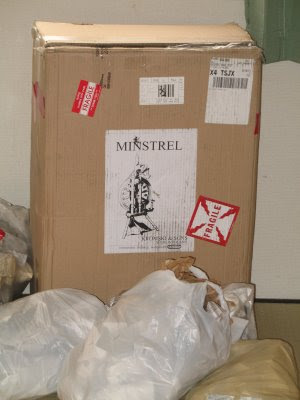 will come out of the box! I must finish the slipcover for the couch (that I said I'd have finished in April) in order to assemble the wheel and start the spinning. To the sewing machine I go!
Posted by AnaMarie at 1:14 AM No comments:

We wanted to get some tapestries and frame them to liven up the room. After going to check out the store, we found that the one we were given was the only really good one they sold, and the frames were $80 for the $8 - $10 tapestries. Not worth it! So, we decided to get an interesting printed fabric from the craft store and hang it where we wanted to add some color to the room. 1 meter of fabric at $6.40, some hemming and some dowels from the Home Center makes an affordable and very nice wall hanging to liven up the room.

As we're buying fabric instead of something already made, I have to stitch up the hems. The fabric itself is very colorful, with pink, blue, and orange flowers surrounding black fans outlined in shiny gold on a lovely variegated green background. The pattern has no border and we decided not to border it with black or anything else. This gives me a dilemma: How to hem it?

I decided it was time to learn how to do a blind hem. And I did! 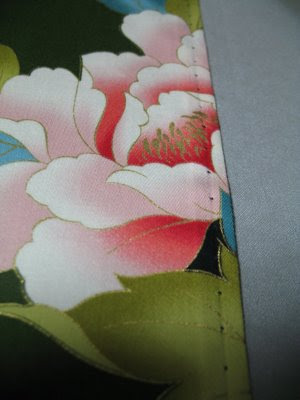 I used a dark green that I already had on the bobbin, the one I used to attempt to put the zipper into my Mother in Law's cardigan. This matched the background, but was obviously too dark to have a straight line going across the flowers and lighter green leaves. It took me a couple of tries, but that is a nice even line, completely disappearing into the background areas and not too intruding on the lighter pattern panels. I am inordinately happy with myself!
Posted by AnaMarie at 6:40 PM No comments: