I left my tape measure at home today. I'm working on a sweater that I'm hoping to finish this month, if I can keep to a skein-a-day schedule. (I'm still on Tuesday's skein, but I have about three more hours of lecture to knit through today and some reading.) Right now, I need to knit for 10" and then start the hip increases. How do I know when I've hit 10"? 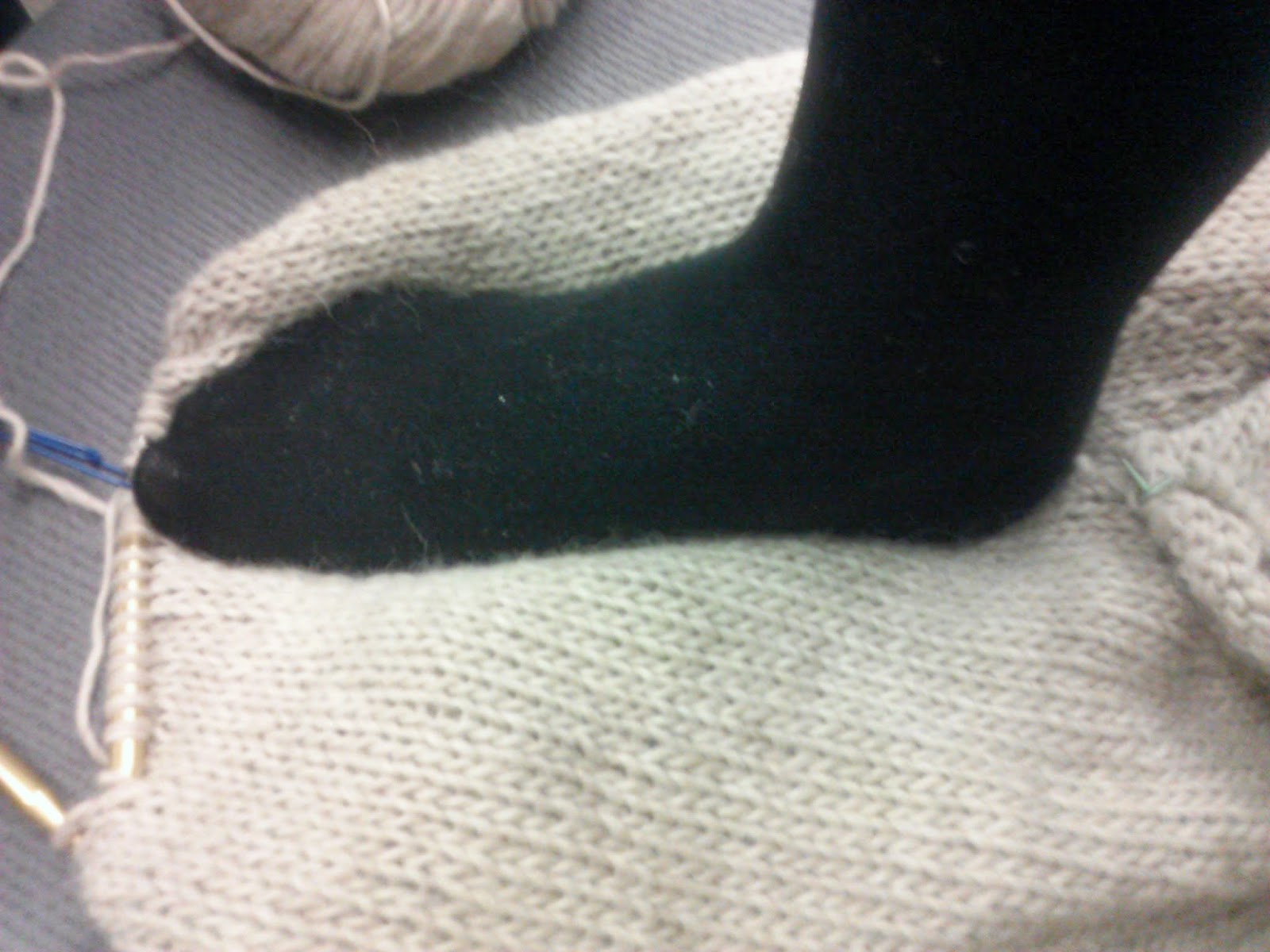 Luckily, my foot is 10"! Even better, there's almost no one left in the office to see me pulling off my shoe
to use my foot to measure the sweater I'm knitting. Crazy? I prefer "innovative."
Posted by AnaMarie at 5:50 PM 1 comment:

I knit four washcloths and tied them around soap using scrap yarn, but only photographed three of them: 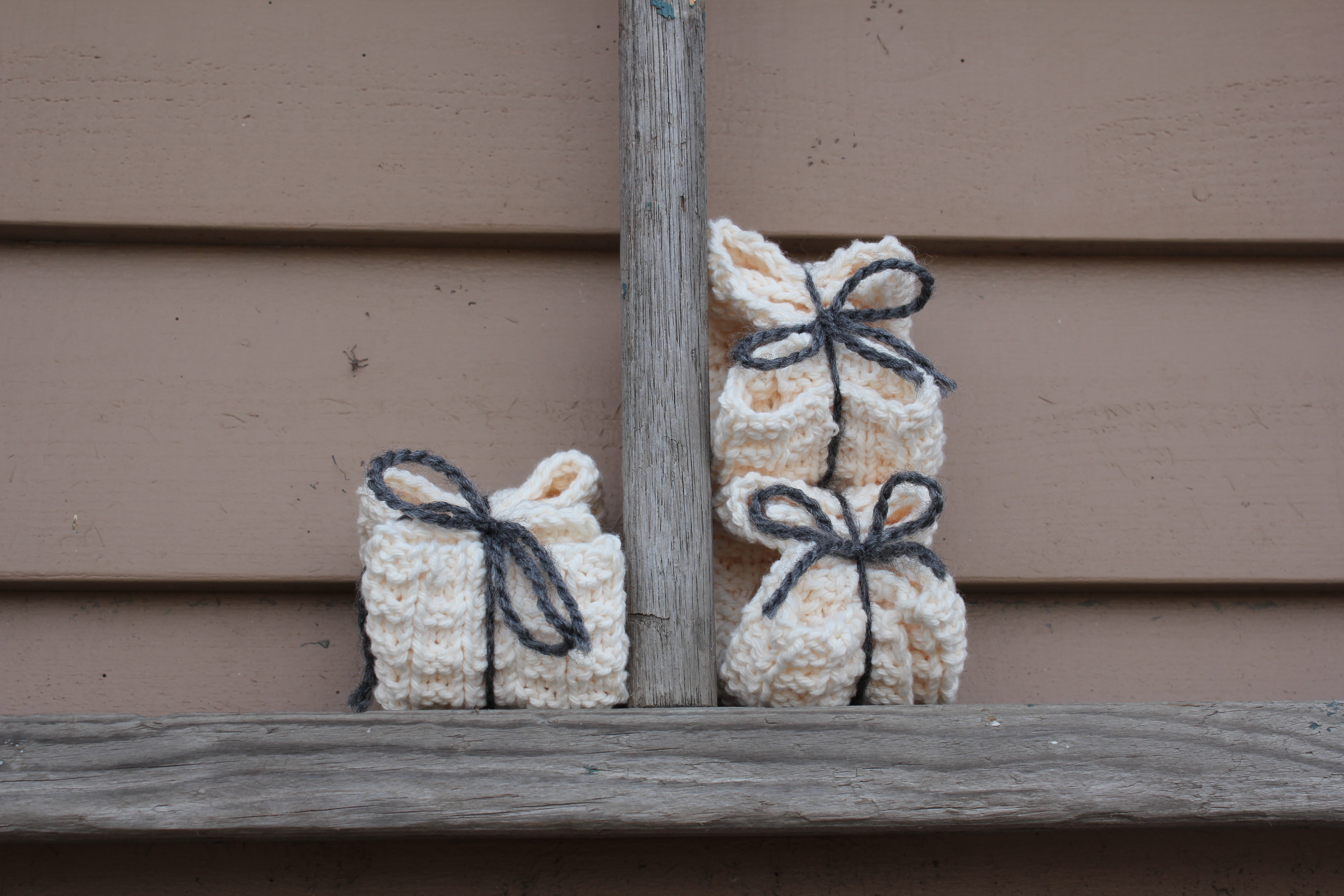 Here's a pair of socks I made for Christmas but didn't post yet. I went to a yarn store with my mother in law and she liked this yarn. Of course, I had to get it for her! I bought two skeins of yarn during this trip, this one and the Solemate that was so hard to find a pattern for. I made an adorable turtle bowl for my nephew and just had to have one for myself too. My sister said she really liked it too, so it looks like I've got a third to make! 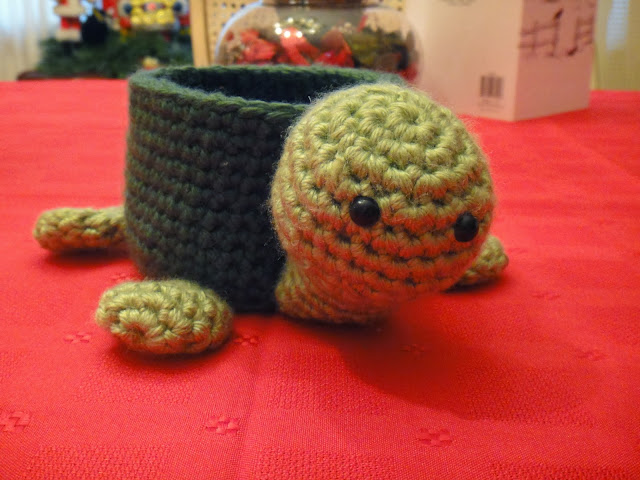 Pattern: Turtle Bowl (mine)
Yarn: Caron Simply Soft in Dark Sage and Pistachio
Hook: 6.0mm/USJ
Timeframe: October 6 - December 29, 2013
Mods: None!
Problems: None!
For mine, I ran out of the dark green and didn't have much of the light green left either. I used a different dark green yarn for the bowl and held the rest of the light green double with a cream colored yarn. It is an excellent craft bowl because it holds lots of useful things and you can use the head as a pincushion! 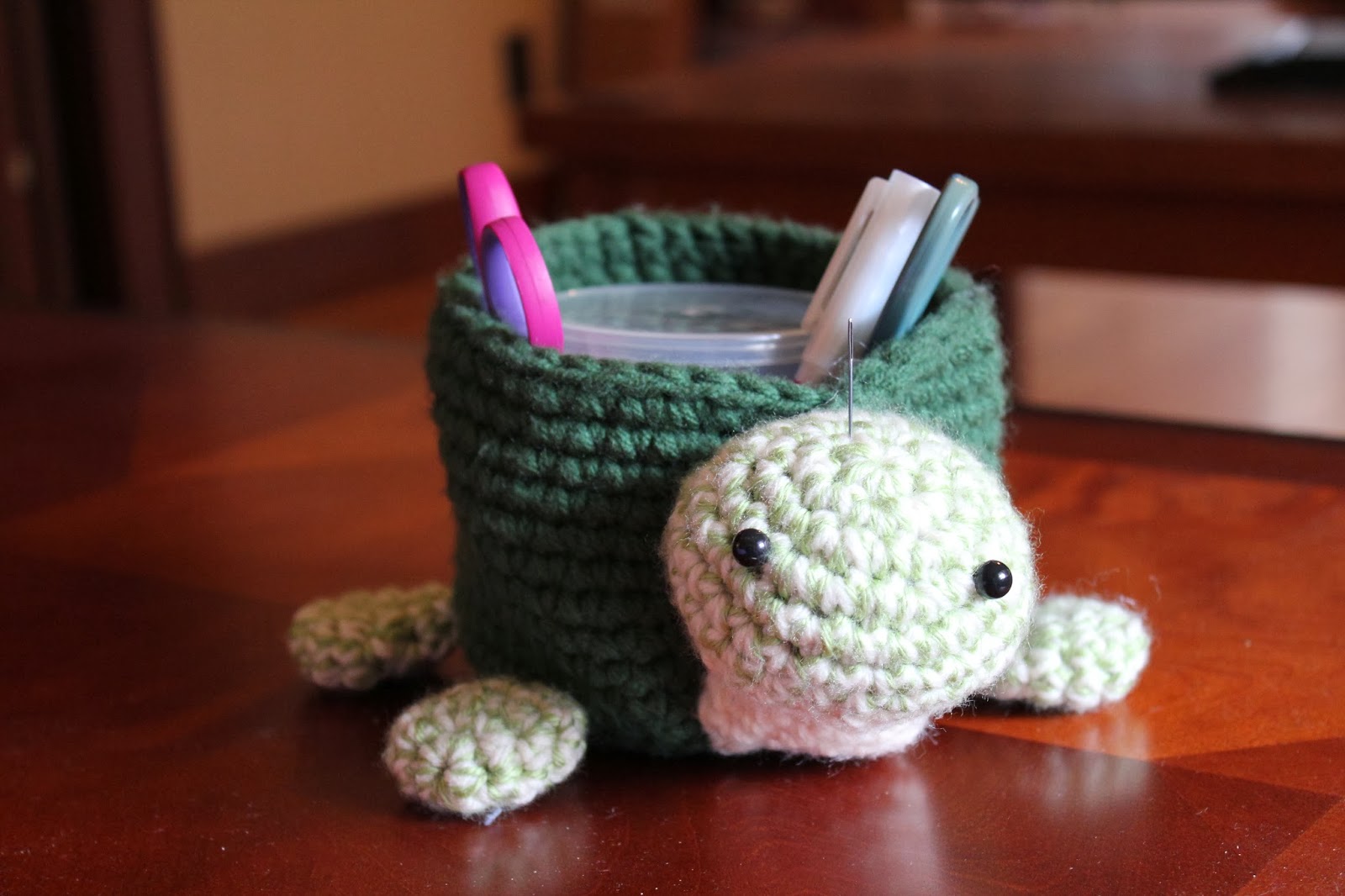 Pattern: Turtle Bowl (mine)
Yarn: Caron Simply Soft in Pistachio and Caron One Pound in Leaf Green and Cream
Hook: 6.0mm/USJ
Timeframe: December 19 - December 31, 2013
Mods: None!
Problems: I might use a larger hook next time. 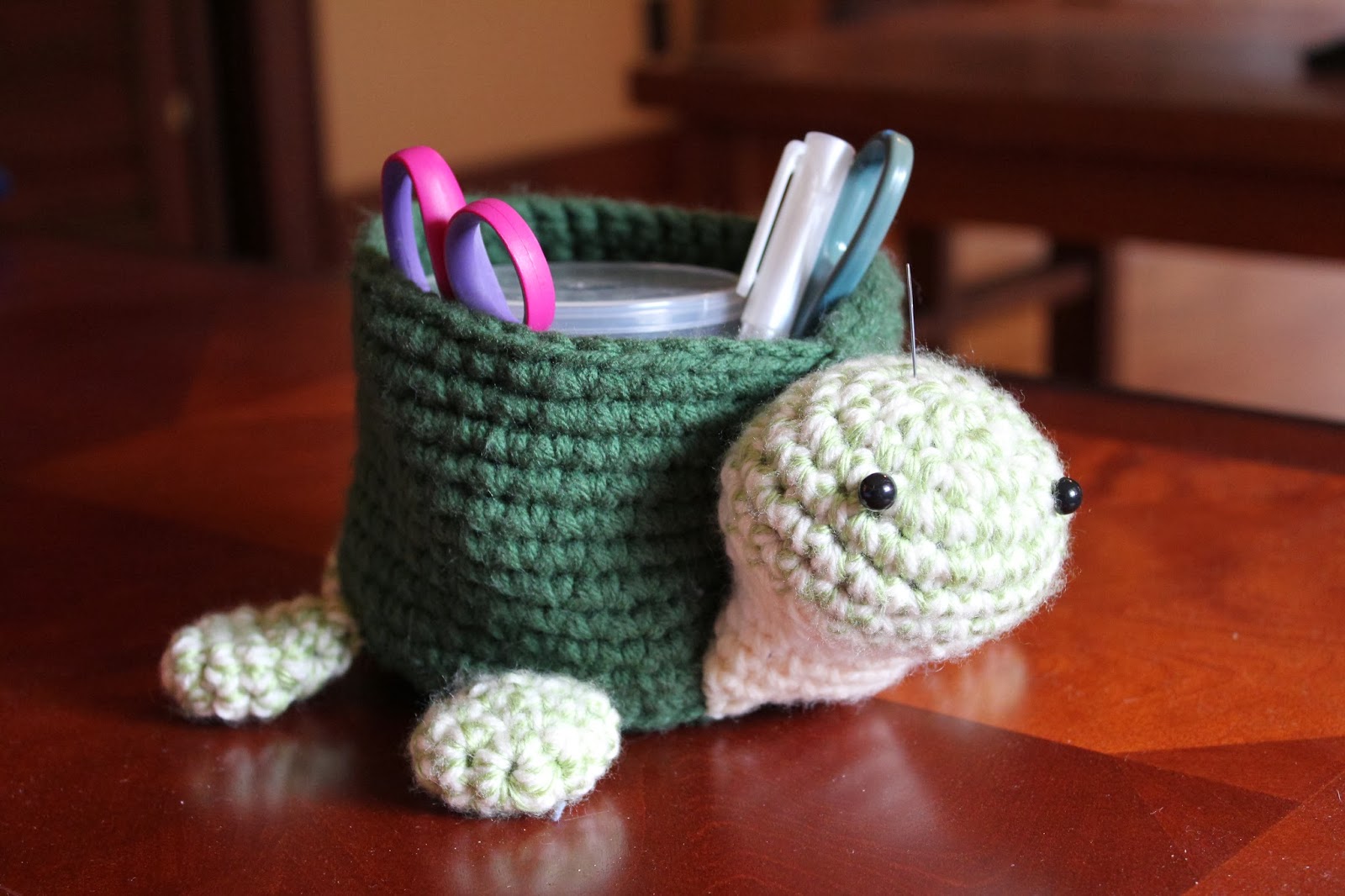 The only question now is what to do for the third turtle bowl. Do I use the cream yarn for the head and feet, or go out and get more yarn? I'll probably just go with the cream - won't be quite as perfect and adorable as the first, but it'll work!
Posted by AnaMarie at 1:17 PM No comments:

His godfather is a policeman, so I think my nephew will enjoy the police officer's outfit. "TPD" means Turtle Police Department. I do hope all these costumes fit his turtle body! 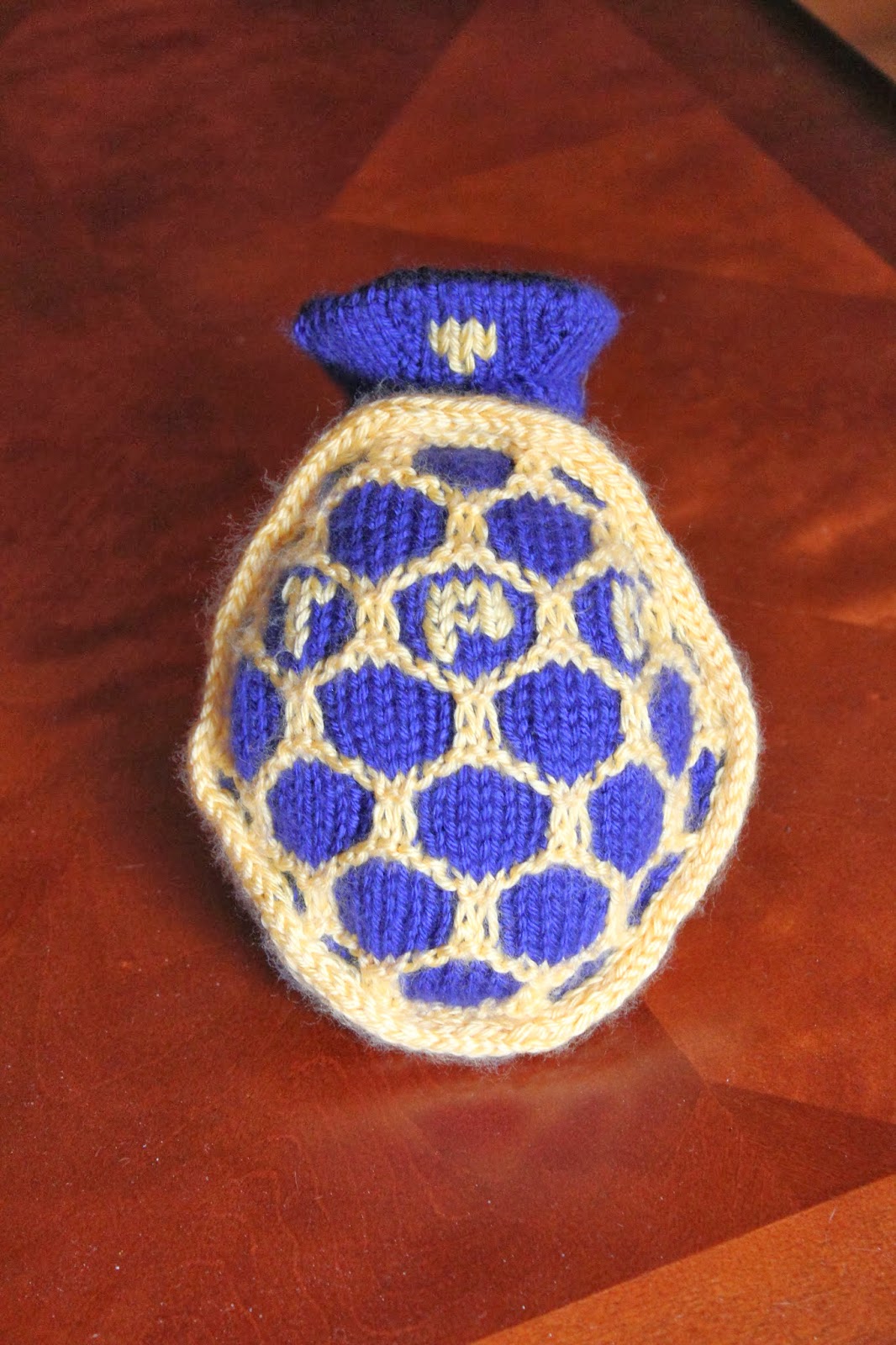 Pattern: Sheldon Policeman Outfit (Ravelry mine)
Yarn: Caron Simply Soft in Sunshine, Black, and Celestial
Needles: US7/4.5mm
Timeframe:March 7 -9, 2014
Mods: I stuffed the hat, added a bottom to keep the stuffing in, and put a magnet in the turtle's head and the hat to help keep it on. Hopefully it works! I didn't add the handcuffs because his sister is little enough that she might swallow them.
Problems: None! 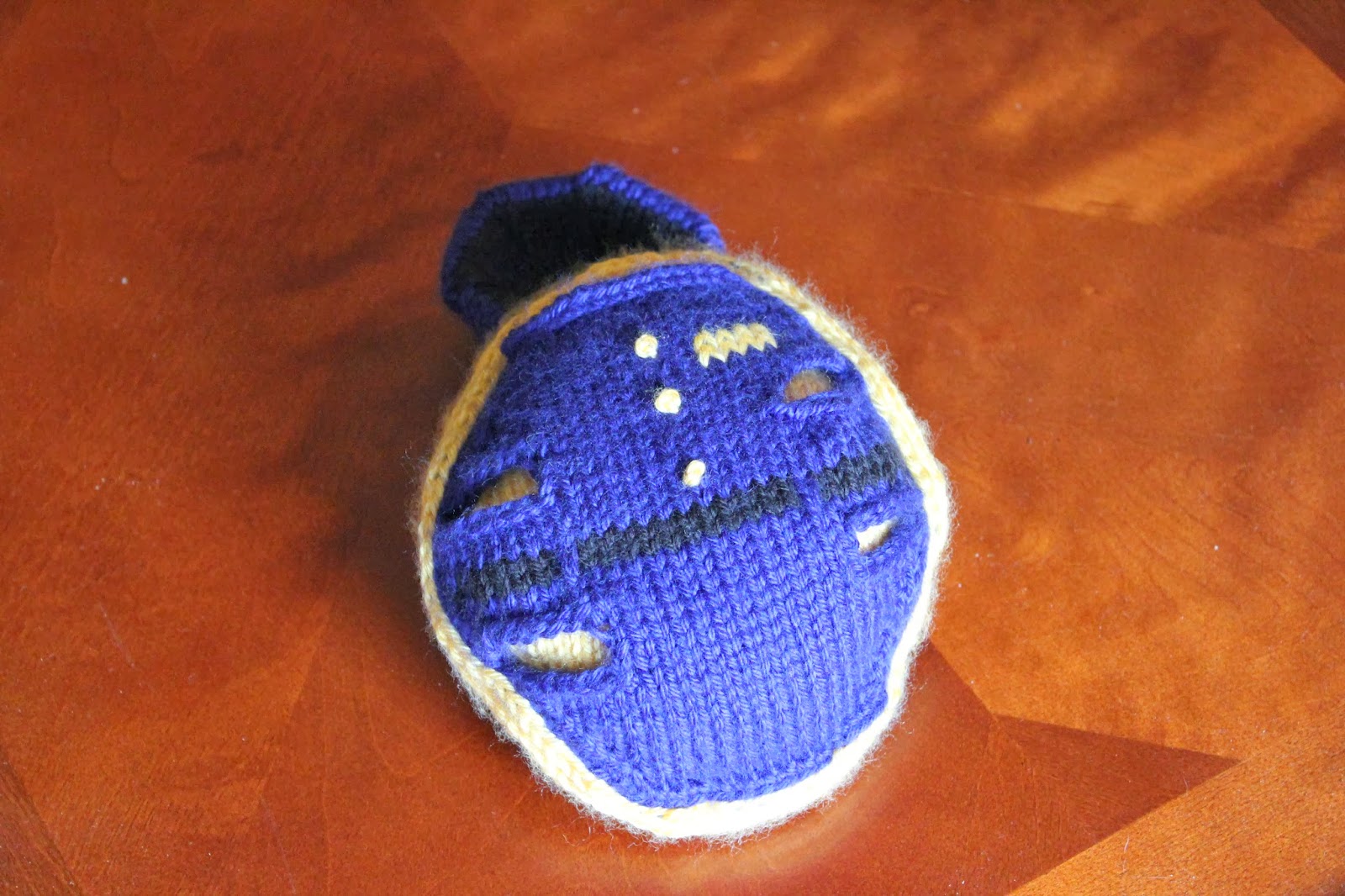 Posted by AnaMarie at 9:37 AM No comments:

Again, you'll have to imagine what the final turtle looks like. They suggest putting an earring in the side of his head to complete the look, but I don't think that's going to happen. I do love the shell, but I'm not so sure about the hat. 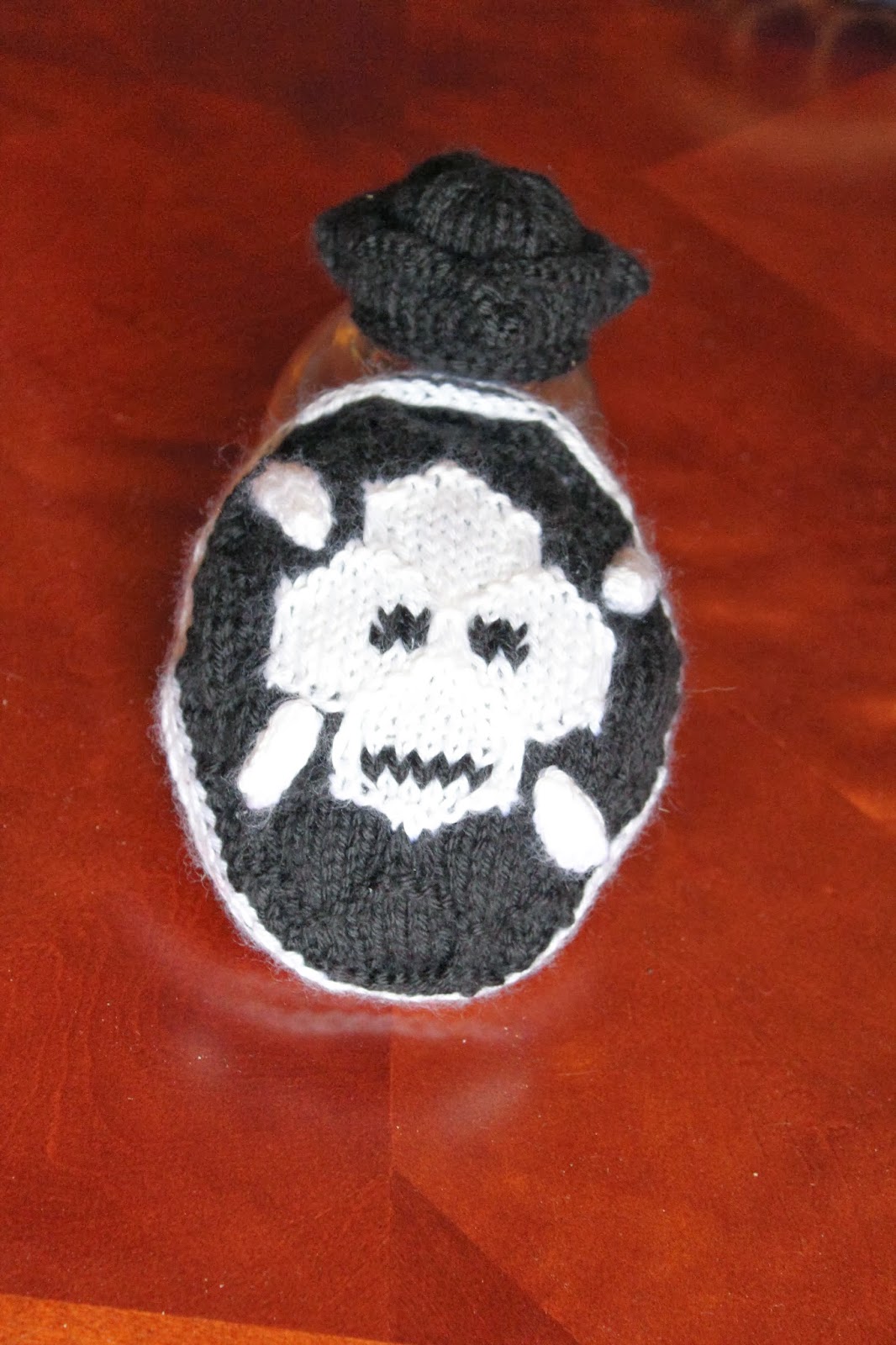 Pattern: Sheldon Pirate Outfit (Ravelry mine)
Yarn: Caron Simply Soft in Sunshine, White, Black, and Autumn Red
Needles: US7/4.5mm
Timeframe: December 17, 2012 - December 30, 2013
Mods: I didn't do the crochet along the hat edge. Also, I stuffed the hat, added a bottom to keep the stuffing in, and put a magnet in the turtle's head and the hat to help keep it on. Hopefully it works!
Problems: None! 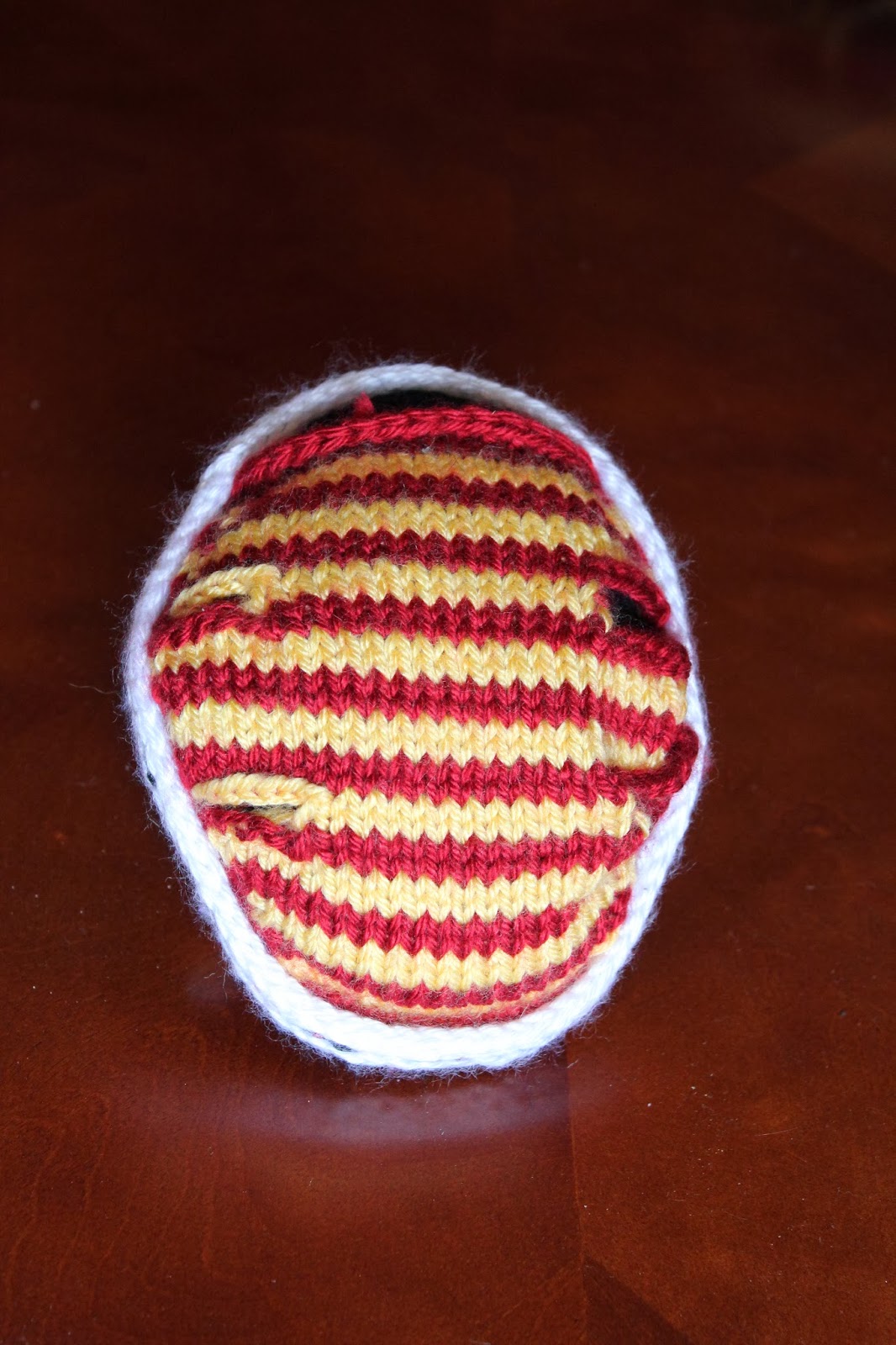 Posted by AnaMarie at 9:32 AM No comments:

Over a year later, I've gotten around to finishing up the other three outfits for Sheldon, just in time for the boy's birthday next week. He currently has the turtle, so you'll just have to imagine how they'll look on the body. 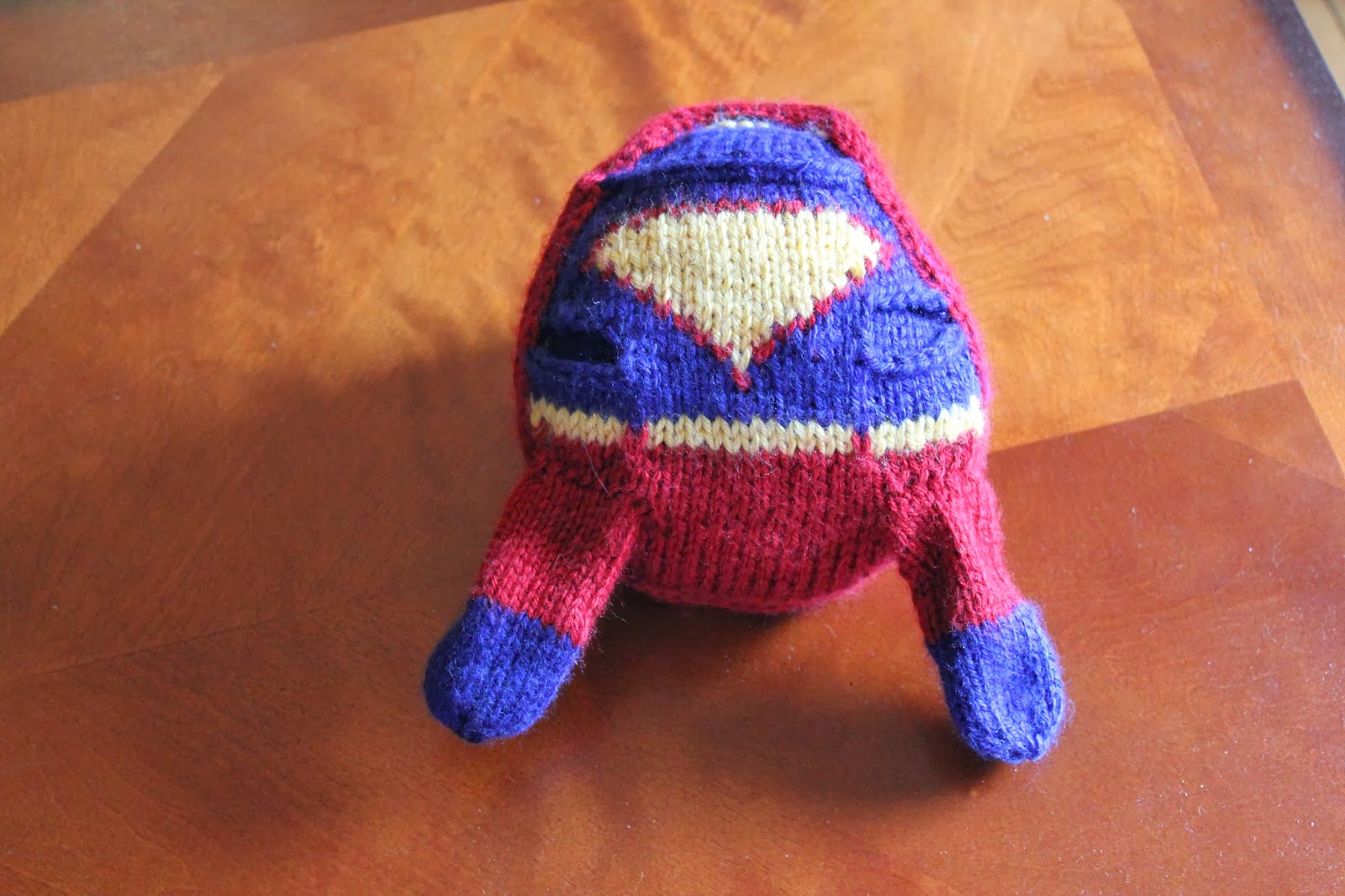 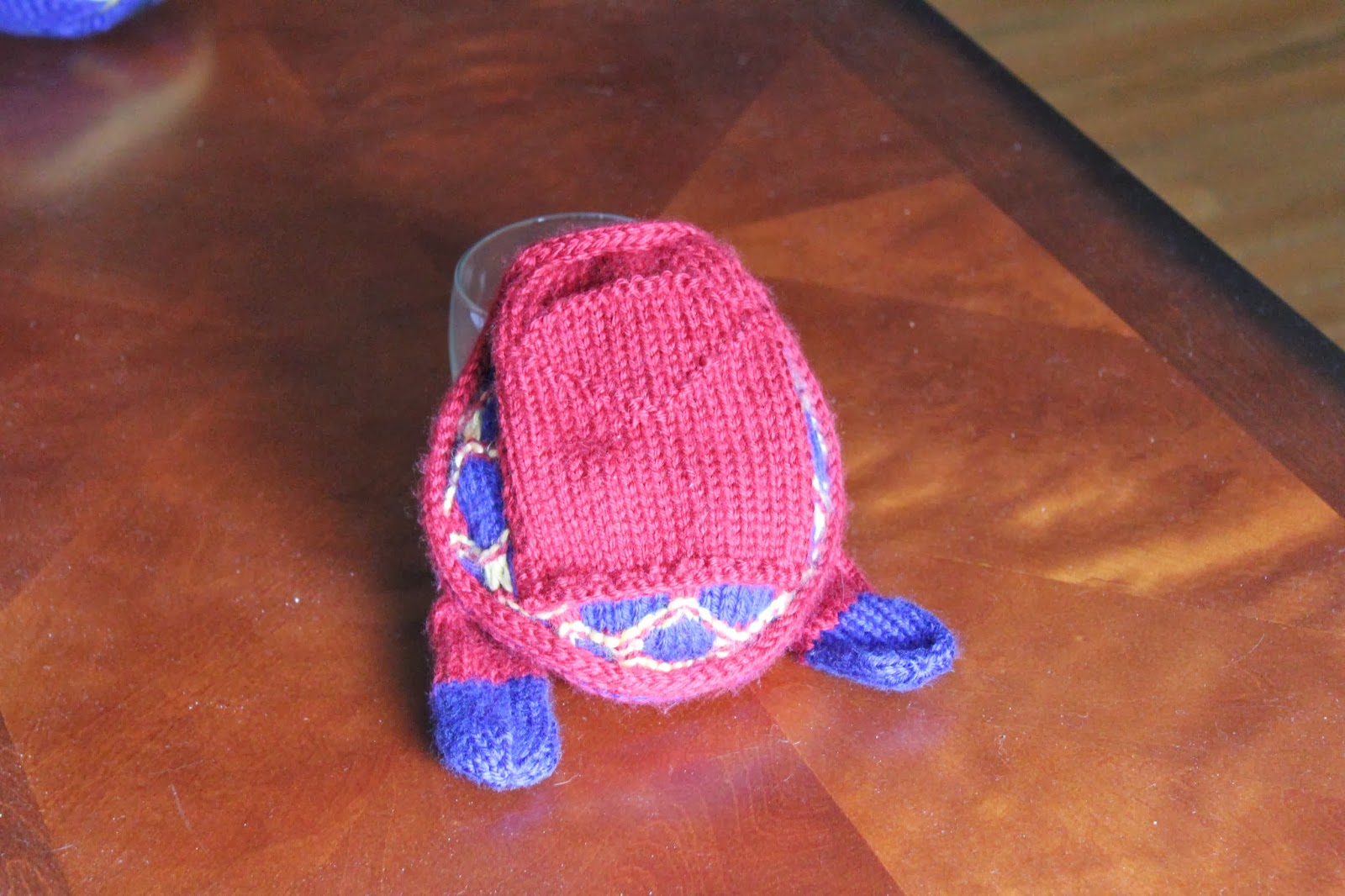 Posted by AnaMarie at 7:23 PM No comments:

In making the adorable turtle with the detachable shell, I intended to make four costumes to go with him. I got one done on time to get pictures with the turtle body and gift with him: 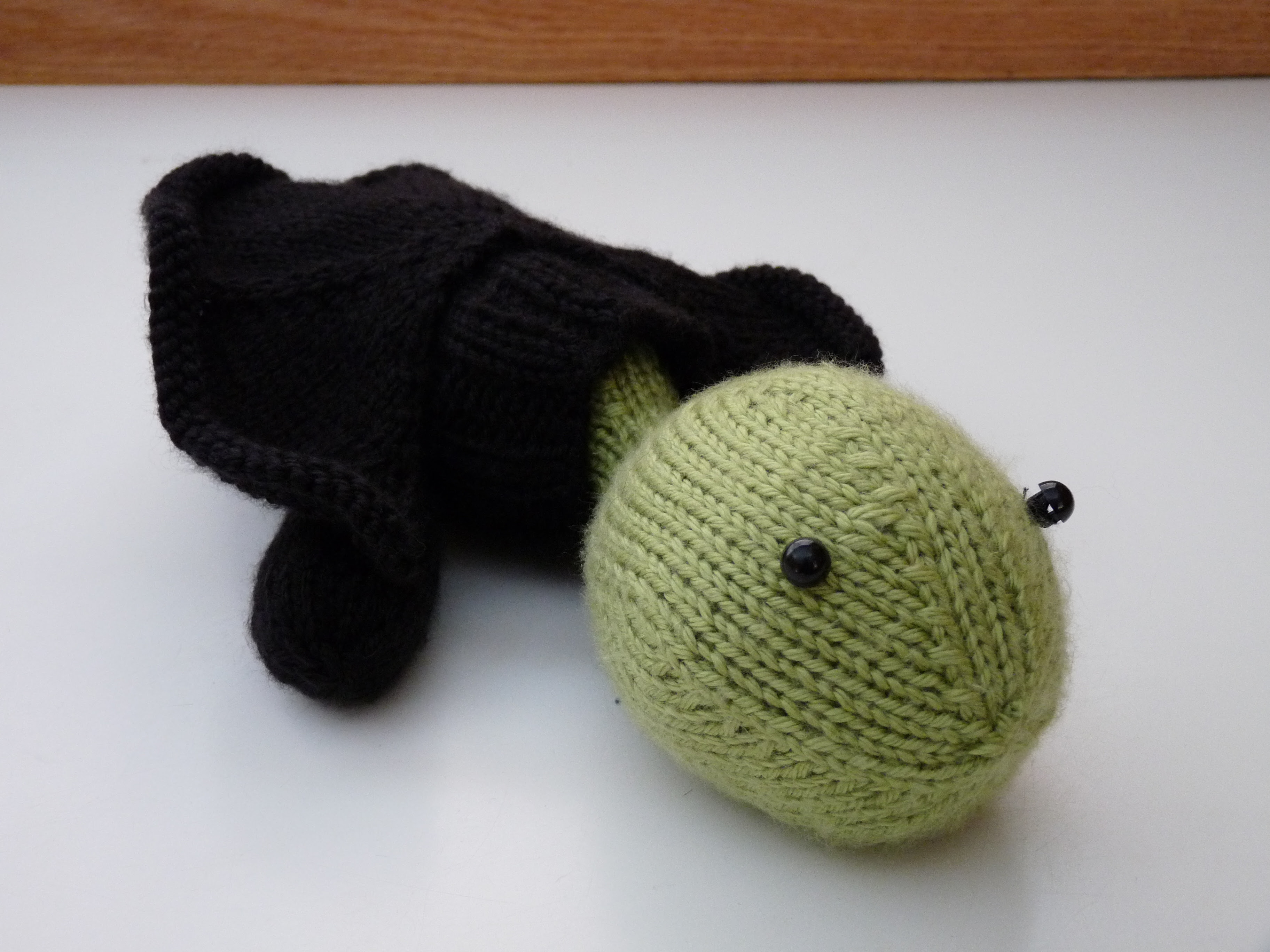 I'm not sure how often the bat shell will be used, but I thought it was adorable! I just hope they realize it's a bat. 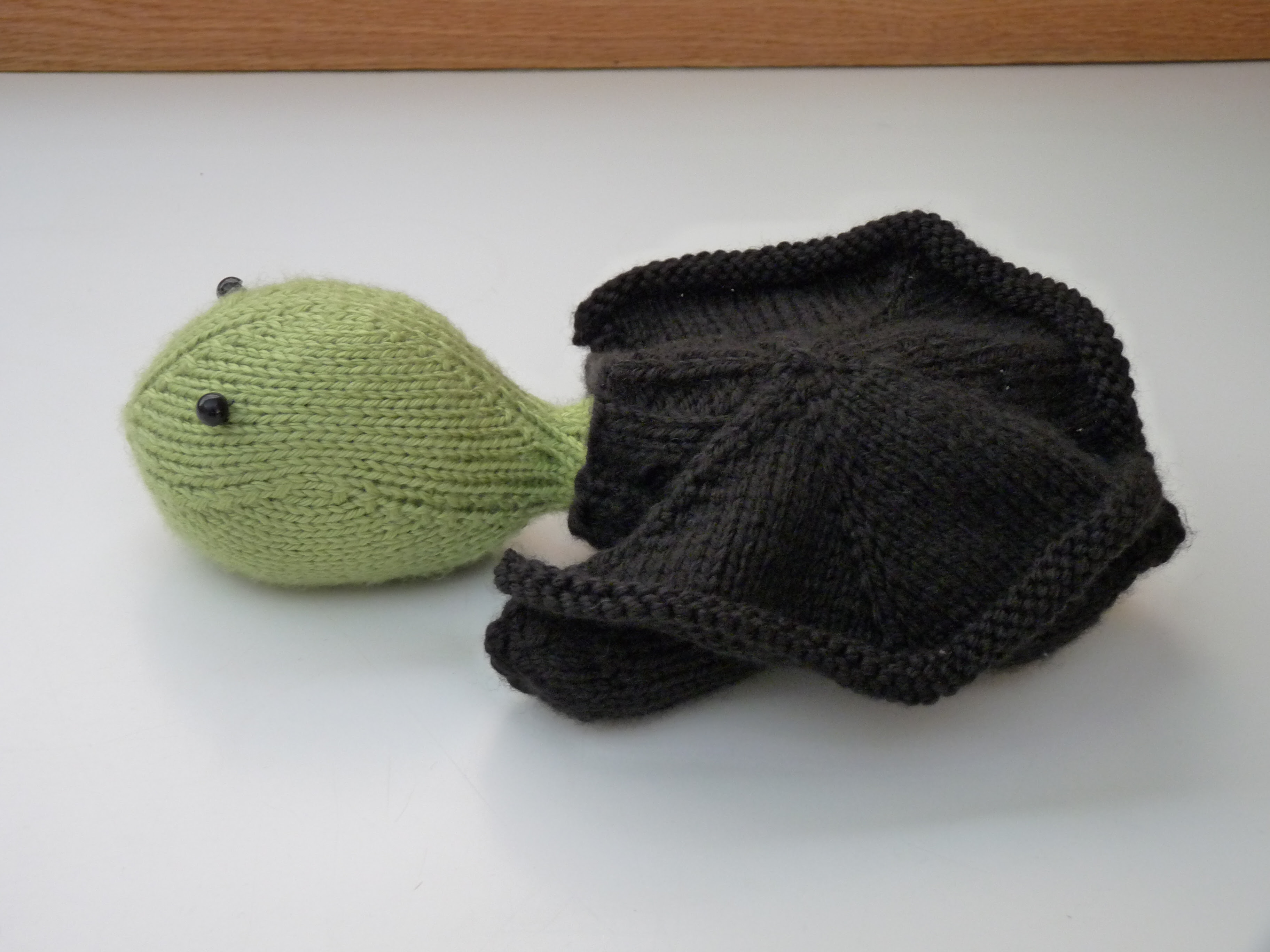 I knit a Sheldon for my nephew a while back. I absolutely loved the little turtle and found him difficult to part with. 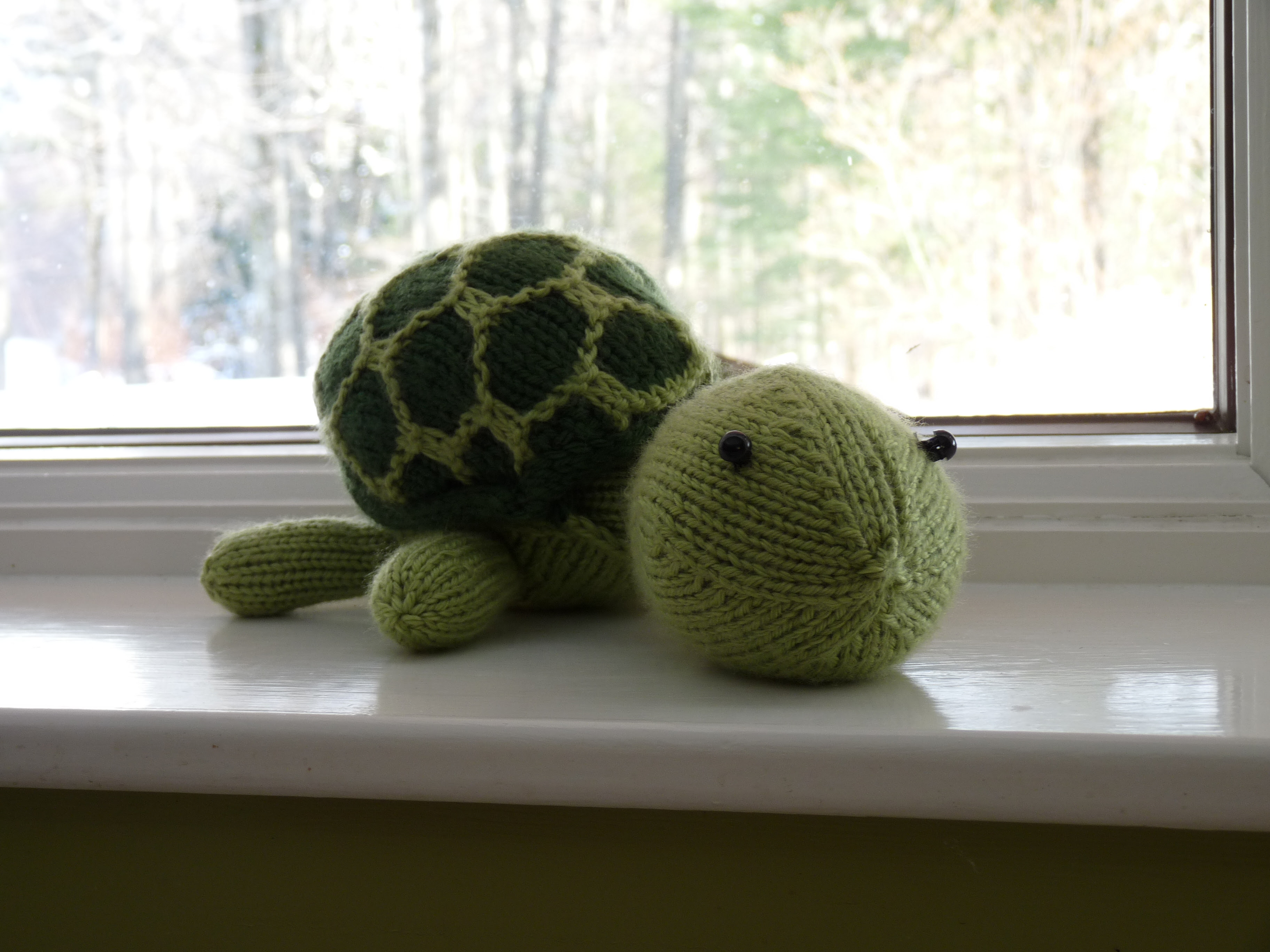 Pattern: Sheldon (Ravelry mine)
Yarn: Caron Simply Soft in Sage and Pistachio
Needles: US6/4.0mm and US7/4.5mm
Timeframe: December 13 - 30, 2012
Mods: Ended the nose a little early to make it less pointy.
Problems: None!
The shell comes off but I didn't get a picture of the naked turtle. I may have to make one for myself some day!
Posted by AnaMarie at 11:49 AM No comments:

Same yarn. Different stitch count. I liked the way the colors popped up in the first (72 stitch) sock, but the pattern wasn't coming through. I liked the look of the second (77 stitch) sock with the 3Px4K rib, but not the spiral pooling. So I tried a stitch count closer to the first (70 stitches) and the pattern of the second (3Px4K) to try to get a sock I was happy with. 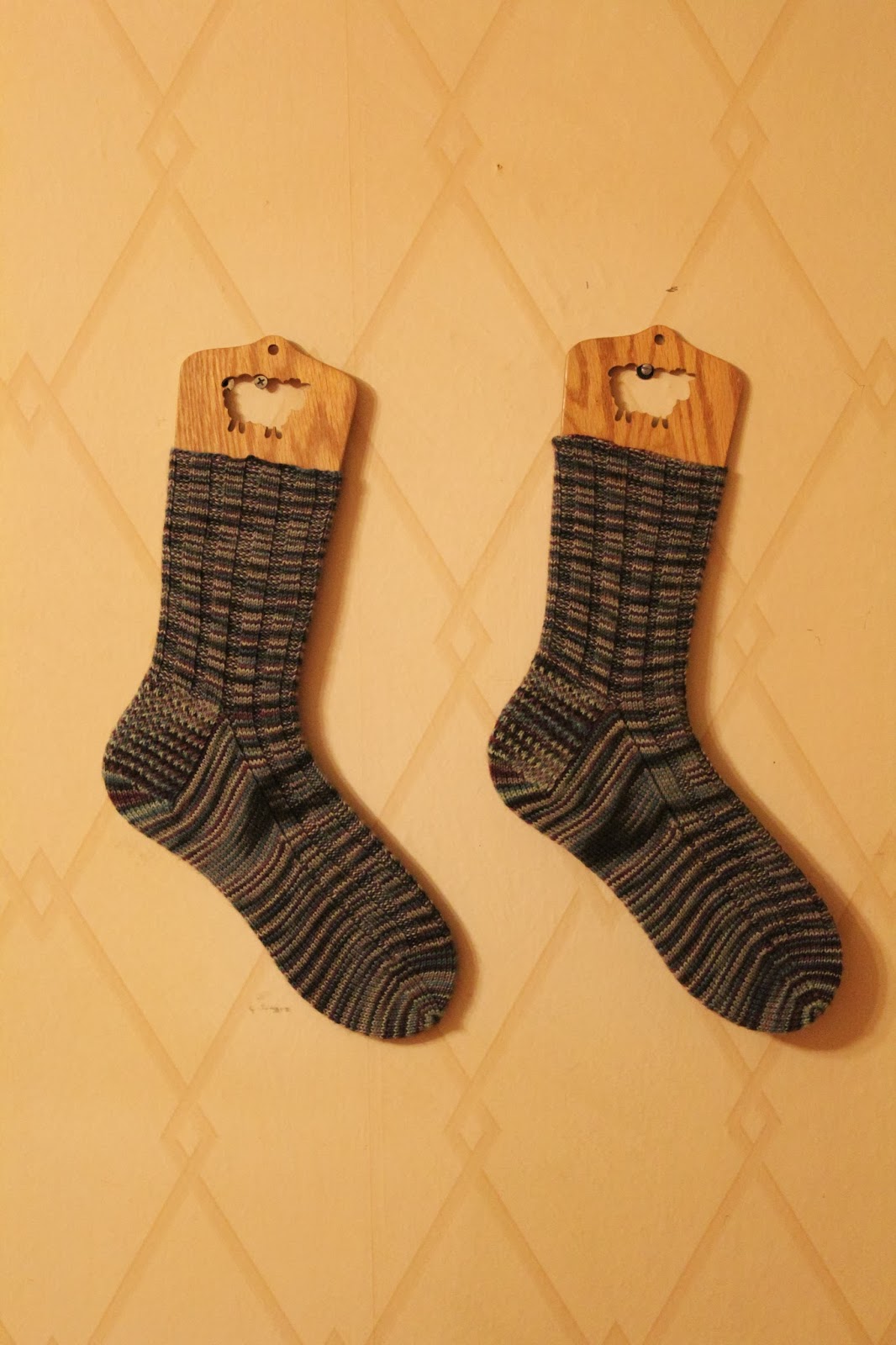 Pattern: None (P3, K4 around, decrease 1 purl st at either side of the heel flap, Eye of Partridge heel, keep ribbing down the instep with 1 P between instep and sole on either side, regular toe) (mine)
Yarn: Lorna's Laces Solemate in Christmas at Downtown
Needles: US1.5/2.5mm
Timeframe: February 6 - March 2, 2014
Mods: None since I made it up as I went along
Problems: None with the final socks, but getting there took some time!
Posted by AnaMarie at 10:44 PM No comments:

In February, I was hoping to finish the Viking Hat, those darn socks, the Cabled Yoke Sweater, and the creepy Santa wall hanging. I got the hat done and knit myself an extremely warm and wonderful cowl. The rest were oh-so-close to being done. It looks like I'll have a very productive March! 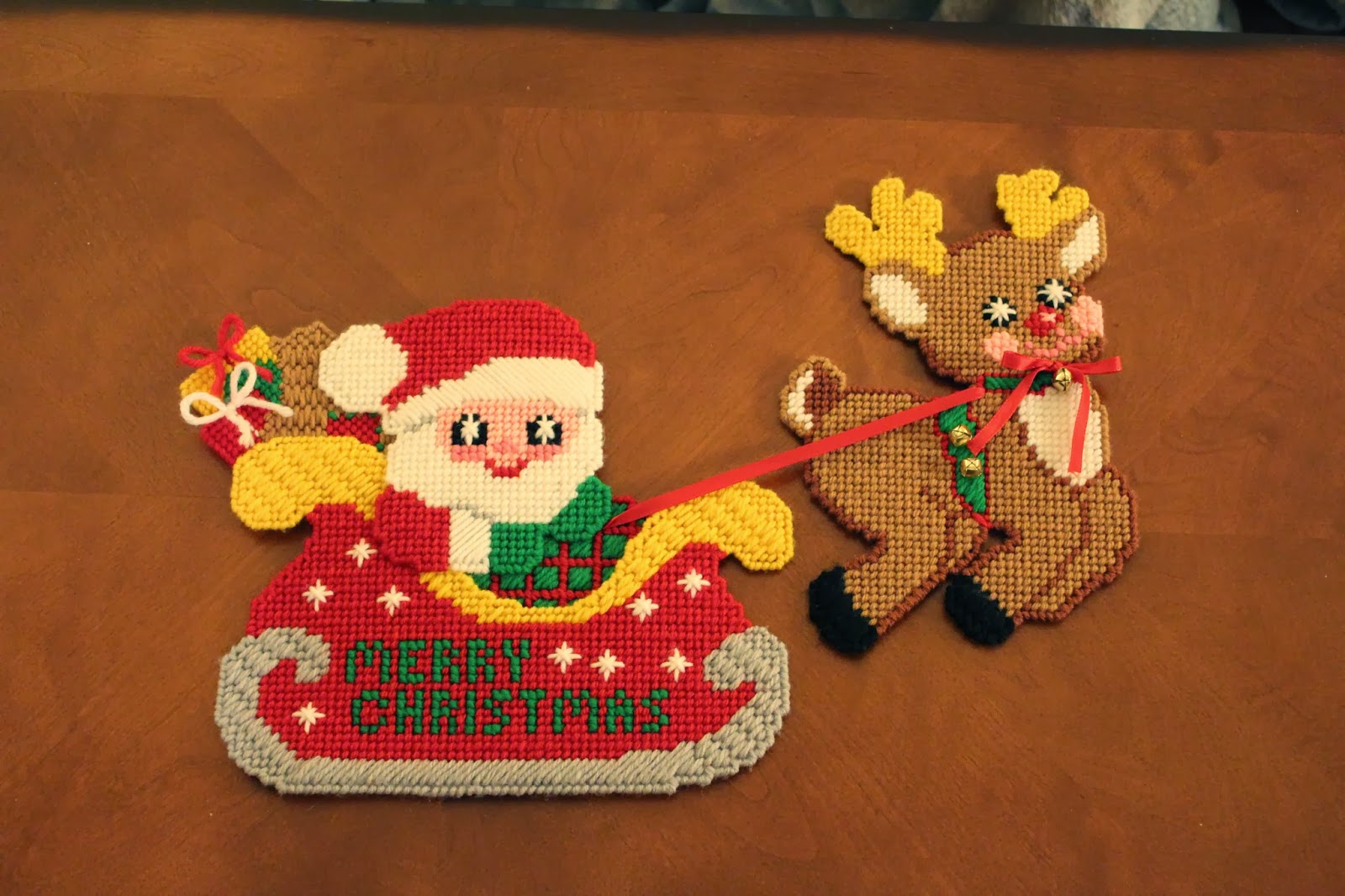 Kit: Temptations Santa and Reindeer
Timeframe: early January - March 2, 2014
Problems: None with the creation, now I gotta figure out what to do with it!
Posted by AnaMarie at 10:03 PM No comments: