I happened across a Boo Knits Halloween Mystery Knit A Long and, unsurprisingly, jumped right in! I had some yarn that might not show the pattern as well as intended, but it's what I had on hand and unmatched to any other project. I did have to get more beads as it calls for about 800 beads, but beads aren't (yet) a problematic part of my stash, so I'm not complaining! 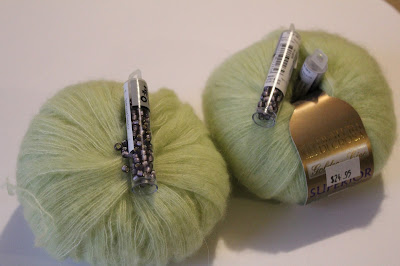 This shawl may be doomed. First, I tried to go to a local bead shop, but they had no reasonable beads. The ones I did order, the lovely purple ones, are actually partially on back order. I'll get the other half in about a week or so. Also, I found when I was setting up this picture, the dye lots are not the same. The skeins are actually a bit light too, only 21 and 23 grams versus the expected 25, and 50 grams was a little on the light side to begin with. I'm hoping that the yarn both shows the texture well enough and lasts enough so I only need to use the white I have for the last row or two and bindoff. It should have the ethereal quality that the pattern says it's going for, but it might obscure the textured portions. I'm hoping it's a bit of texture and a bunch of beads and lace. Fingers crossed!
Posted by AnaMarie at 7:29 PM

Thanks for taking the time to comment on my blog!